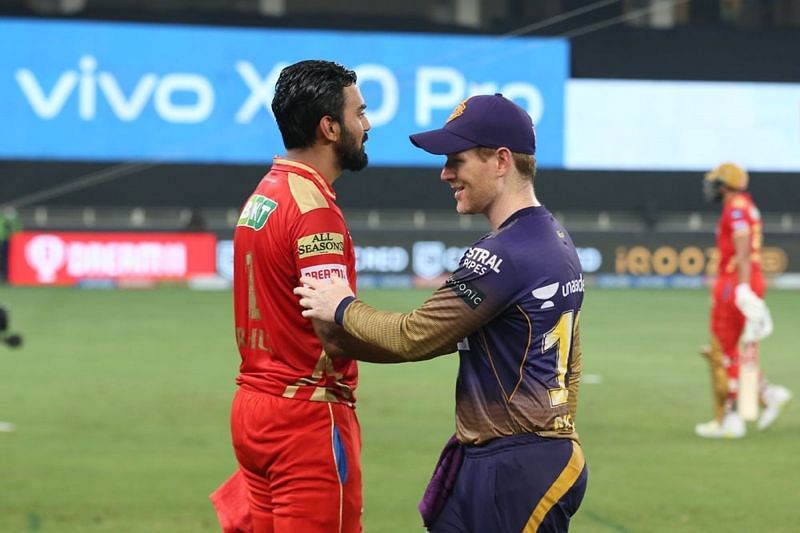 Kolkata Knight Riders (KKR) were a team of two halves – half of the side doing everything right and the other half getting even the basics horribly wrong. They put up a decent toal of 165 on the board, courtesy another Venkatesh Iyer brilliance (67 off 49) and cameos from Rahul Tripathi (34 off 26) and Nitish Rana (31 off 18).

In the second innings, Sunil Narine and Varun Chakrvarthy held their weight against some brilliant hitting from KL Rahul and Maynak Agarwal. The KKR spinners brought PBKS to the brink of another choke – 129-2 to 162-5 – but dropped catches from Dinesh Karthik and Tripathi gave the final twist to the tale, allowing the Mohali-based franchise a five-wicket win.

A quick look at the updated IPL 2021 Points Table

What does this mean for PBKS?

PBKS have got a fully-inflated life jacket in the shape of two points. The win allowed them to soar past the Mumbai Indians (MI) to fifth place in the points table – at par with KKR for five wins from 12 games and 10 points.

However, even if PBKS manage to get to 14 points they’ll have to work slightly on their NRR, which is currently at -0.236, to edge ahead of KKR in case of a tie.

What does this mean for KKR?

Not only has this game crushed KKR’s momentum in the UAE leg but it also made them dependent on other teams’ failures for their qualifying dreams. KKR, like PBKS, need to win their remaining two games to reach close to the fourth spot.

Eoin Morgan’s team have it easier than PBKS in this case as their last opponents are eighth-placed SunRisers Hyderabad (SRH) and seventh-placed Rajasthan Royals (RR) respectively. But given the continued absence of Andre Russell and Lockie Ferguson, they can’t take anything for granted.

KKR will also pray to see MI lose at least one of their last three games and then bank on their superior NRR of +0.302 to get past all three contenders.

Impact on other teams in the Points Table

PBKS’ rise pushed MI down a spot in the table but the defending champions have played only 10 matches so far and will fancy their chances of winning all three remaining games. Sanju Samson’s RR, who recently lost badly to SRH, will be happy to see KKR’s defeat, because it keeps them in contention for the top-four as well.

Denial of responsibility! NewsUpdate is an automatic aggregator around the global media. All the content are available free on Internet. We have just arranged it in one platform for educational purpose only. In each content, the hyperlink to the primary source is specified. All trademarks belong to their rightful owners, all materials to their authors. If you are the owner of the content and do not want us to publish your materials on our website, please contact us by email – [email protected]. The content will be deleted within 24 hours.
Beatbest sports newsCricketeoin morganfeatureIndia vs England 2021 Teams & SquadsIPLIPL 2021

If we learn to handle pressure better, we will be among top teams: Rahul