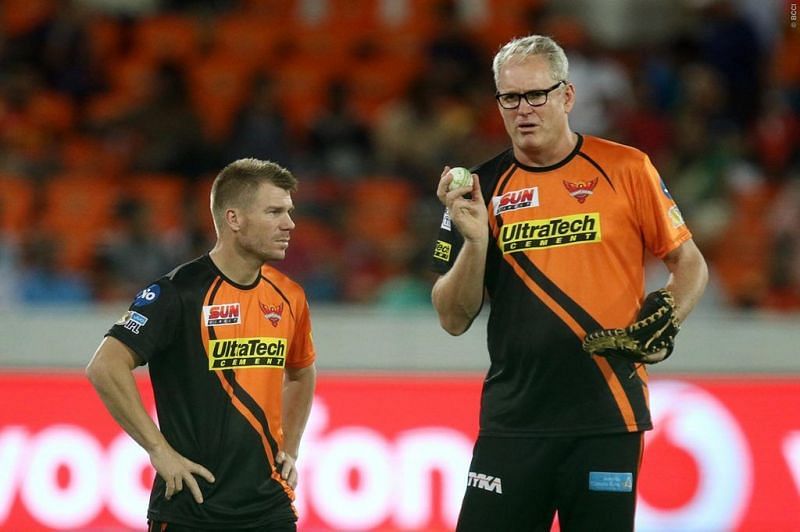 SunRisers Hyderabad’s treatment of former skipper David Warner during the 14th season of the Indian Premier League has been one of the biggest talking points.

Warner, who led SRH to their sole IPL title in 2016, was stripped of his leadership duties midway through the 14th season. He was later dumped out of the starting XI on two separate instances.

The southpaw has been a consistent run-scoring juggernaut for the franchise over the years. Hence, many wonder the possible reason behind such a harsh treatment.

Fox Cricket has come up with a report explaining the reasons behind Moody’s decision to bench his compatriot. They alleged that SRH’s ‘Director of Cricket’ Tom Moody’s penchant towards becoming Team India’s head coach pushed him to make such a decision.

According to the same report, the owners of SunRisers Hyderabad are ‘influential figures’ in the BCCI. It may have led to Moody and the rest of the management to leave Warner out and give the young Indian players an opportunity.

“It’s understood by foxsports.com.au the former World Cup-winner and well-travelled coach is eyeing the Indian coaching job, which is set to be vacated by Shastri following the impending T20 World Cup. Moody, who after a long stint as head coach of the Sunrisers, where together with Warner as his captain led them to glory in 2016, was replaced by former England coach Trevor Bayliss but later named as the franchise’s director of cricket.”

“It’s believed the Sunrisers’ owners are influential figures in the BCCI, which could explain the decision to leave Warner out for their past half-a-dozen matches and turn to youth,’’ the report added.

The report also adds that Warner has been approached by a number of other franchises.

“Warner, too, has been approached by a number of other IPL franchises, who have been shocked by the run-scoring machine being sidelined.’’

It is worth pointing out that Trevor Bayliss is the head coach of SRH. Tom Moody, who has previously coached the “Orange Army” to title glory, is the “Director of Cricket”.

Moody’s desire to become Indian coach is well known. The former World Cup-winner has been trying relentlessly since 2005 to claim the most high-profile job in the sport.

‘Thank You for the memories created’- David Warner to his fans

Meanwhile, Warner on Friday penned an emotional note for his fans as SRH players took to the field for their last game of the season.

Warner’s relationship with the franchise has deteriorated a lot. Despite the absence of Kane Williamson from playing XI, the Australian wasn’t given a chance to play his last match for SRH.

Warner thanked his fans for their consistent support during his stay at the franchise over the years via an emotional note on Instagram.

Warner’s journey with SRH may have ended on a painful note, but his contribution to the franchise will always remain a part of IPL folklore.

Denial of responsibility! NewsUpdate is an automatic aggregator around the global media. All the content are available free on Internet. We have just arranged it in one platform for educational purpose only. In each content, the hyperlink to the primary source is specified. All trademarks belong to their rightful owners, all materials to their authors. If you are the owner of the content and do not want us to publish your materials on our website, please contact us by email – [email protected]. The content will be deleted within 24 hours.
best sports newsCoachCricketDavidDavid WarnerDesirefallGrace

Mark Few to Be Suspended by Gonzaga for September DUI, Will Return Nov. 13