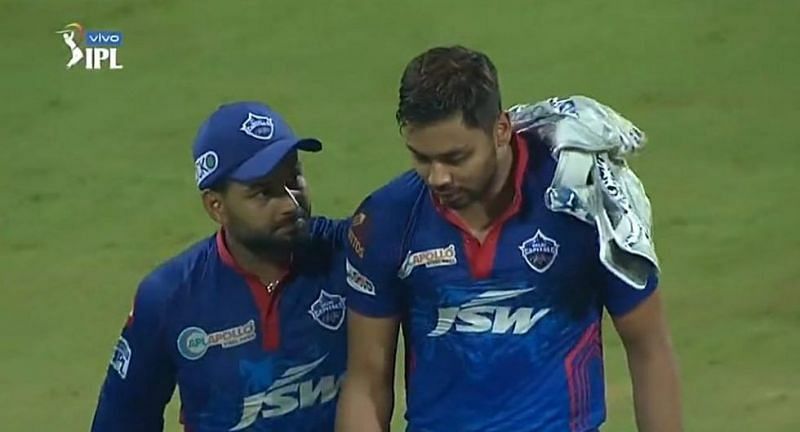 Delhi Capitals (DC) fast bowler Avesh Khan has credited skipper Rishabh Pant for his stellar IPL 2021 campaign, which has yielded 23 wickets so far. He came into the season wicketless in the last two editions from the limited opportunities he availed, but is now second in the race for the Purple Cap.

Playing under the leadership of his former U-19 World Cup teammate has helped Avesh Khan’s growth as he now competes with the likes of Anrich Nortje and Kagiso Rabada. It was due to the absence of DC’s South African speedsters that Avesh Khan was able to burst into the playing XI and cement his place.

With his raw pace and adaptability, Avesh Khan has managed to keep veteran Indian bowlers Umesh Yadav and Ishant Sharma on the sidelines.

While speaking to ESPN Cricinfo, Avesh Khan asserted the importance of confidence that the team management bestows on the player:

“It is good for me that the team management have trusted me, especially Rishabh Pant. He is always telling me what to bowl, what not to bowl. The entire credit goes to him. We have played together since the U-19 days. He gives me a signal from behind the wicket and I know what delivery he wants me to bowl, then I just focus on executing the ball.”

Avesh Khan came into the tournament after recovering from an injury he sustained while playing a warm-up game ahead of India’s tour of England.

“I wanted to make full use of the opportunity” – Avesh Khan

Before this season, Avesh Khan only had 9 IPL appearances under his belt, with 5 wickets to his name. With Nortje, Rabada, and Ishant Sharma not being available for the franchise’s initial set of games earlier this season, DC had put out a pace attack comprising of Avesh Khan, Tom Curran, Chris Woakes, and Marcus Stoinis.

In a high-scoring encounter against CSK, it was Avesh Khan who stood out among the bowlers with a spell of 2-23, that included the wicket of MS Dhoni. He added:

“Every year I would prepare with the mindset that I would play from the first match, but unfortunately, I would never get the chance. Last 2 years I got 1 match each. This season, though, Rabada and Nortje were not available for the first 2 games, and Ishant Sharma was injured, so Rishabh Pant trusted me so I wanted to make full use of the opportunity of playing from the first game itself.”

DC will face KKR in Qualifier 2 in Sharjah to book a spot in the 2021 IPL Final against CSK.

Q. Who should lead DC next season?

Denial of responsibility! NewsUpdate is an automatic aggregator around the global media. All the content are available free on Internet. We have just arranged it in one platform for educational purpose only. In each content, the hyperlink to the primary source is specified. All trademarks belong to their rightful owners, all materials to their authors. If you are the owner of the content and do not want us to publish your materials on our website, please contact us by email – abuse@newsupdate.uk. The content will be deleted within 24 hours.
Aveshavesh khanbest sports newscampaigncreditCricketdelhi capitalsentire