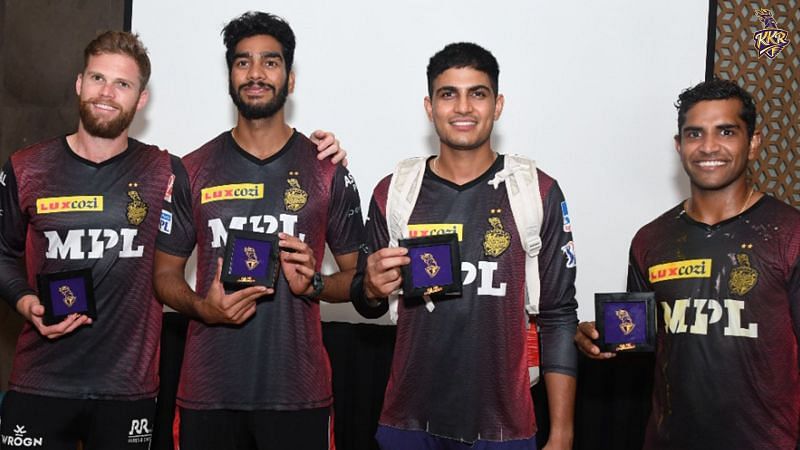 Kolkata Knight Riders put on an excellent show last night as they comprehensively defeated the Rajasthan Royals at Sharjah in a must-win game. Courtesy of a huge win, KKR are now firm favorites to seal the fourth playoff spot as their net run rate is way better when compared to the Mumbai Indians.

After the emphatic victory, the KKR players were all smiles in the dressing room and were elated. The Kolkata franchise gave their fans a glimpse of the dressing room reactions from last night by sharing a video on their official Instagram handle.

In the video, fans can see most of the Knight Riders discussing and giving their views about the match. KKR shared the following post and captioned it:

You can watch the video below:

Dinesh Karthik was full of praise for the fight and determination shown by the KKR side. He also applauded the batting department for applying themselves and batting wonderfully on a difficult Sharjah pitch on Thursday.

KKR have the advantage of playing their playoffs in Sharjah: Virender Sehwag

Former Indian batsman Virender Sehwag opined that KKR would have an advantage in the playoffs as they might potentially play their matches in Sharjah, where they have been successful in the league stage.

Speaking to Cricbuzz, Sehwag gave his views about KKR’s chances if they reach the playoffs and said:

“I think it’s a good sign for the KKR. They have a match at a venue in which they have delivered an outstanding performance and will get another if they win it. Hence, it’s pretty suitable for them as they are aware of the conditions and know how to approach it.”

“Bangalore might play better because they have 2-3 players in Ab de Villiers, Glenn Maxwell, and Virat Kohli, who can win games single-handedly. But Kolkata has the advantage of playing their playoffs in Sharjah.”

Technically, the Mumbai Indians still have an outside chance of overtaking KKR. However, KKR is most likely to advance to the next stage owing to their superior net run rate. MI could only usurp KKR if they win by a mammoth margin against SRH in their last league match tonight.

Q. Will MI pull off a miracle?

Denial of responsibility! NewsUpdate is an automatic aggregator around the global media. All the content are available free on Internet. We have just arranged it in one platform for educational purpose only. In each content, the hyperlink to the primary source is specified. All trademarks belong to their rightful owners, all materials to their authors. If you are the owner of the content and do not want us to publish your materials on our website, please contact us by email – [email protected]. The content will be deleted within 24 hours.
best sports newsclinicalCricketdinesh karthikdressingIPLIPL 2021ipl 2021 news