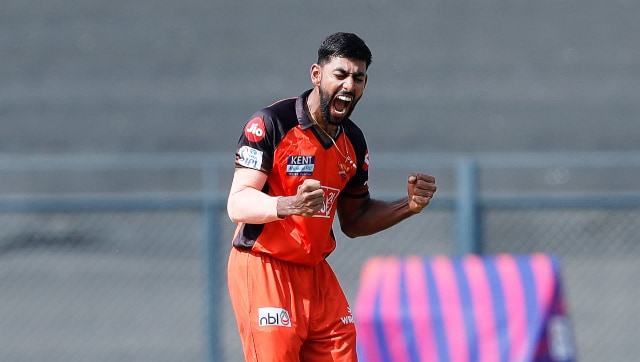 Virat Kohli’s poor run in the 2022 Indian Premier League (IPL) continued as the former Royal Challengers Bangalore (RCB) captain was dismissed off the first delivery of the match by Jagadeesha Suchith.

Kohli flicked a pitched-up delivery from the left-arm spinner straight into the hands of Kane Williamson at midwicket, falling for his third golden duck of the season and his sixth overall in the league, giving RCB the worst possible start after captain Faf du Plessis elected to bat against the Sunrisers Hyderabad (SRH) at the Wankhede Stadium. Kohli has collected 216 runs so far this season in 12 outings in what is his one of his worst-ever performances in the IPL.

Suchith, in the process, became only the third bowler in the history of the tournament to achieve the rare feat of collecting a wicket off the first ball of the match.

Jagadeesha Suchith celebrates after removing Virat Kohli off the first ball of the match during Sunrisers Hyderabad’s return fixture against Royal Challengers Bangalore in IPL 2022. Sportzpics

Kevin Pietersen and Marlon Samuels are the only other bowlers to have achieved the feat, in the 2009 and 2012 seasons respectively. Pietersen had removed Brendon McCullum during RCB’s match against Kolkata Knight Riders (KKR) in Durban, while Samuels, representing the now-defunct Pune Warriors, got Parthiv Patel clean bowled in their match against Deccan Charges, another team that no longer exists, in Cuttack.

After removing Kohli, Suchith — who was drafted into the XI for the match against the Sunrisers in place of all-rounder Shreyas Gopal — denied Rajat Patidar a half-century and would later finish the pick of the SRH bowlers with figures of 2/30.

Despite the poor start, RCB would boss SRH for the remainder of the game. Skipper du Plessis quickly brought his side back on their feet with a 105-run stand with Patidar, and would remain unbeaten on 73, while Dinesh Karthik provided the finishing touches with an unbeaten 30 off just 8 balls.

Sri Lankan all-rounder Wanindu Hasaranga would later wreck the SRH batting order with a Player of the Match-winning haul of 5/18 — the best bowling figures this season — and was ably supported by Josh Hazlewood (2/17) as SRH were bundled out for a lowly 125. Bangalore thus avenged their nine-wicket mauling against the same side earlier this season, in which they were bundled out for 68 — the only sub-100 score of IPL 2022.

Denial of responsibility! NewsUpdate is an automatic aggregator around the global media. All the content are available free on Internet. We have just arranged it in one platform for educational purpose only. In each content, the hyperlink to the primary source is specified. All trademarks belong to their rightful owners, all materials to their authors. If you are the owner of the content and do not want us to publish your materials on our website, please contact us by email – [email protected]. The content will be deleted within 24 hours.
best sports newsclashclubdismissalentersexclusivefirstballFirstcricket

Street Fighter 6: Could badass lumberjack Pietra be a roster newcomer?

Double Fine joins Bungie in supporting abortion rights in the US