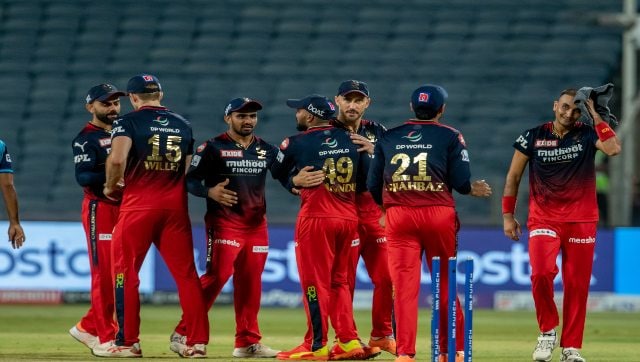 IPL 2022 playoffs scenarios explained: Why RCB and PBKS need to be on top of their game – Firstcricket News, Firstpost

As the Indian Premier League (IPL) 2022 is moving towards the final phase, the playoffs race is becoming more exciting. While Gujarat Titans have sealed their qualification after a superb win against the Lucknow Super Giants, Mumbai Indians have suffered the elimination. On the other side, all the other sides do have a chance to march ahead.

But there are two sides, Royal Challengers Bangalore and Punjab Kings who can’t afford to be complacent at any given stage now.

Punjab Kings are presently sitting at 8th spot with 10 points in the table but they are scheduled to play three more matches.

They will be up against RCB, Delhi Capitals and Sunrisers Hyderabad in the next fixtures. If the side manages to win all these three encounters, they will have 16 points under their belt making an easy passage for them for the playoffs.

But wins for PBKS in all three games will mean that RCB can then have a maximum of 16 points as they presently have 14 points from 12 matches.

Apart from RCB, three wins on the trot for PBKS in all three encounters will make things tricky for DC as well as SRH as they both will have a chance of having a maximum of 14 points.

For Royal Challengers Bangalore, the equation is simple. Win both your games, grab four crucial points and take your tally to 18. But even if they lose one of the two matches, they would still have a chance of ending the league stage with 16 points.

But the problems will arise if they suffer defeats in both their matches and stay at 14 points.

How are RCB in a spot of bother?

As mentioned above, if SRH lose to PBKS but etch wins against KKR and MI, they will still have 14 points under their belt. A win for SRH against KKR will bring curtains to the Knight Riders’ campaign as well as they have 10 points from 12 matches at the moment. If SRH lose two games out of the three, then it will end the journey for them.

KKR will have to win both the matches and get to 14 points to stay in the hunt.

Similarly, if DC suffer defeat against PBKS but beat MI, they will also have 14 points eventually.

Rajasthan Royals are already at 14 points with two matches to go against Lucknow Super Giants and Chennai Super Kings. Even if they lose both these games, they will still have 14 points.

Another team who might make this race a bit tricky is CSK. They have three more games to go against MI, GT and RR and have 8 points in their kitty. If the MS Dhoni-led side wins all three matches then they will also have 14 points.

If the situation arises, the NRR will be the most important factor.

Denial of responsibility! NewsUpdate is an automatic aggregator around the global media. All the content are available free on Internet. We have just arranged it in one platform for educational purpose only. In each content, the hyperlink to the primary source is specified. All trademarks belong to their rightful owners, all materials to their authors. If you are the owner of the content and do not want us to publish your materials on our website, please contact us by email – [email protected]. The content will be deleted within 24 hours.
best sports newsexplainedFirstcricketFirstpostGameIPLNewsnews update sports

Yu-Gi-Oh! Master Duel Helps Konami Have One Of Its Most Successful Years Ever

Shadab, Nawaz back in Pakistan squad for West Indies ODIs |…

Six Apple apps in desperate need of a makeover