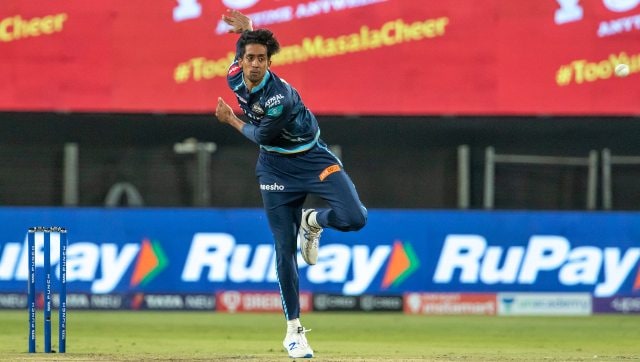 IPL 2022: Who is R Sai Kishore, spinner who returned with impressive figures on GT debut against LSG – Firstcricket News, Firstpost

Gujarat Titans handed debut to spinner Sai Kishore and the left-hander didn’t disappoint. In the two overs that the 25-year-old spinner bowled, Sai Kishore returned with figures of 2/7 as the Titans clinched a thumping win against Lucknow Super Giants by 62 runs after bowling them out for 82 in less than 14 overs.

The Titans had put 144/4 in 20 overs after Shubman Gill had struck 63* runs off 49 balls and then bundled out the Lucknow team. Rashid Khan scalped four wickets for his side. The Hardik Pandya-led side also became the first team in the IPL 2022 to register a place in the playoffs.

R Sai Kishore made his IPL debut while playing for Titans against Lucknow Super Giants in Pune. Sportzpics

Who is Sai Kishore?

Ravisrinivasan Sai Kishore has become known face in the domestic circuit and plays for Tamil Nadu. Kishore made his FC and List A debuts for the side back in 2017 and was then handed the T20 debut in January 2018.

In 2020, he was roped in by the Chennai Super Kings Rs 20 lakh while in 2021, the spinner got a chance to spend time with the Indian team as he was selected as one of the net bowlers for the Sri Lanka tour. Later, he was added to the squad after there was a COVID-19 outbreak within the Indian contingent.

“…Being with CSK has been a big plus, my game has got better. If I have to say correctly, when you practise with the best of the best, you will automatically get better,” Sai Kishore had told PTI after he was picked up as a net bowler.

In January 2022, Kishore was named as one of the two standbys in the Indian squad for the West Indies T20I series at home. Later, he was bought by the Gujarat Titans during the mega auctions for a sum of Rs 3 crore.

The spinner finally made his IPL debut while playing for Titans against Lucknow Super Giants in Pune.

Denial of responsibility! NewsUpdate is an automatic aggregator around the global media. All the content are available free on Internet. We have just arranged it in one platform for educational purpose only. In each content, the hyperlink to the primary source is specified. All trademarks belong to their rightful owners, all materials to their authors. If you are the owner of the content and do not want us to publish your materials on our website, please contact us by email – [email protected]. The content will be deleted within 24 hours.
best sports newsdebutfiguresFirstcricketFirstpostImpressiveIPLKishore