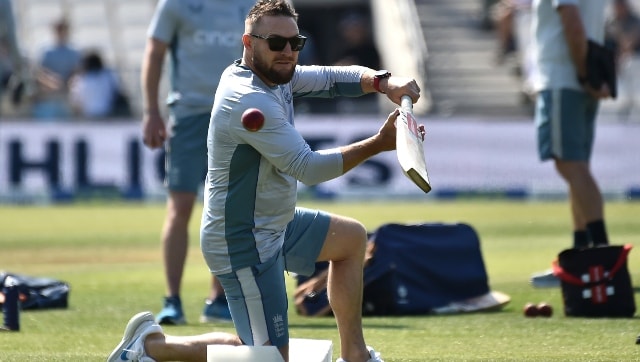 ‘It aligns beautifully to his personality and also to mine’: McCullum on Stokes being England captain at right time – Firstcricket News, Firstpost

England coach Brendon McCullum said that Ben Stokes acquired the leadership role of the England Test side at a very right time.

The 40-year-old Kiwi believes that the time is right for Stokes, in terms of where he stands in his career and also as he was appointed the coach at the same time. He also said that he initially feared that the two were too similar to succeed together.

McCullum was appointed as the coach of the English test team in May 2022, a few weeks after the ECB confirmed Ben Stokes as the captain of the Test side.

McCullum has hardly opened up in media after being appointed as the head coach. However, in an interview with SENZ Radio, he said, “I think where Stokesy is at in his career, and his aspirations as a leader and where he sees his team needs to go, it aligns beautifully to his personality and also to mine. The danger probably was that we’d be too similar.”

The former Kiwi opener said that he along with Stokes ensures that they involve others from the leadership group within the team while important discussions are made and other viewpoints are also considered.

“But I think both of us have got such motivation to try and improve the side that we give and take in the areas we need to, and we try and ensure that we surround ourselves with leaders within the group as well, both on the field and also support staff who can fill in some of the gaps where we may not be as strong as well.

“So understanding that we’re not the perfect products either, but I think being able to bounce off each other and to also push each other towards the danger, as well because sometimes even you have doubts. But if you’re able to have that filtering system between both the captain and the coach and to remain on task with what we’re trying to achieve and the direction that we want to go, I think it gives you a better chance of ensuring that there’s consistency with that message.”

The duo of McCullum and Stokes has been brilliant so far with two back-to-back Test wins against New Zealand. Based on reports, McCullum had been influential in the second Test when England required 160 runs to win at the tea break on day five but chased it down inside 16 overs.

However, McCullum didn’t share his thoughts when he was quizzed about his words at the tea break. “I don’t want to go too much into kind of what we said because it’s sacred in the dressing room. But I was echoing the sentiments of the skipper really, his messaging has been incredibly powerful and simple, trying to remove the fear of failure.

“There are moments in Test matches, there are moments in series, there are moments in careers where you’ve got to be strong enough to stick to what the plan was initially. And just because there’s more at risk, or there’s more on the table, you shouldn’t walk away from that. And that was very much the message, go out there and try to win lads, that’s what we’re here for. We’ve done well even if we get beat, we’ve played a good game of cricket and if someone’s able to stand up to us and beat us when we throw everything at them then you’ve got to be content with it. And that was very much the messaging and the guys have been fantastic.

McCullum gave the credit to captain Stokes for how the dressing room had received him and the fact that he has been able to sync well with the skipper.

“I couldn’t have asked for a more receptive dressing room than what we’ve had in the last two Test matches. But a lot of that is down to the skipper, his way and his methods are very much aligned to mine.”

England have dominated New Zealand in the three-match series, winning 2-0. The third match as well has started well for England. Following the third Test against the Black Caps, England’s next assignment will be the rescheduled Test match against India starting 1 July.

Denial of responsibility! NewsUpdate is an automatic aggregator around the global media. All the content are available free on Internet. We have just arranged it in one platform for educational purpose only. In each content, the hyperlink to the primary source is specified. All trademarks belong to their rightful owners, all materials to their authors. If you are the owner of the content and do not want us to publish your materials on our website, please contact us by email – [email protected]. The content will be deleted within 24 hours.
alignsbeautifullybest sports newscaptainenglandFirstcricketFirstpostMcCullum

The Mighty Thor is coming to ‘Marvel’s Avengers’ next week

A rethink of the building blocks for solar panels could help…