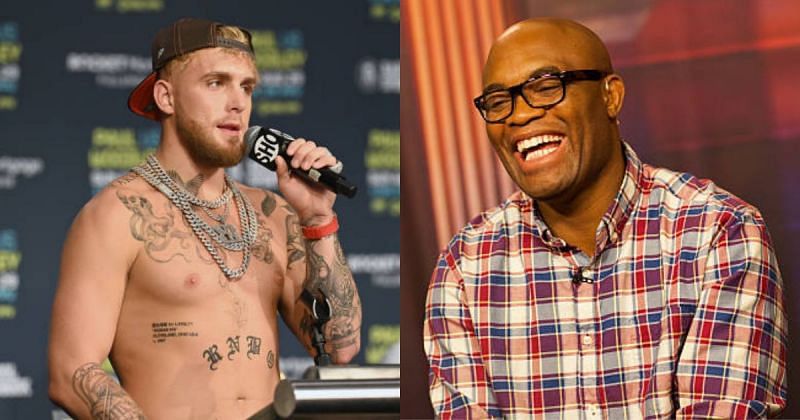 Jake Paul is fascinated by the idea of sharing a boxing ring with Anderson Silva. However, Paul suggested ‘The Spider’ would have to undergo several fitness tests to prove he could compete against the 24-year-old.

“I think it would be a huge fight for sure,” Jake Paul told Ariel Helwani on The MMA Hour. “He is a legend of the sport, great head movement, great striking. For me, I would love it. I have nothing but respect for Anderson. I’ve watched him growing up and was a fan of his growing up. So it will be cool to get in there and see what would happen.”

Paul added that Silva’s age could be a huge hurdle in making the fight happen. Expressing confidence in his ability to outstrike the UFC great, the YouTube star said he would want to make sure that Silva was medically cleared to fight him. He said the combat sports veteran would sustain “a lot of punishment” if they had a boxing showdown.

“I would want him to go through lots of testing to make sure that he is actually good to get into the ring. I wouldn’t want some s**t that just happened with Vitor (Belfort) and (Evander) Holyfield… (Anderson Silva) is out there looking good against these older guys… I’m sorry but I’m built different. It would be a lot of punishment for him and I wouldn’t want to take out the old guy.”

Watch Jake Paul talk about his potential fight with Anderson Silva in the video below (from 7:20):

Jake Paul doesn’t agree with the notion that he is only challenging former MMA fighters who are considerably older than him.

He believes that if he takes on Anderson Silva and beats him, people will start pushing a narrative that he can’t fight competitors who are physically strong and athletic. However, Paul didn’t completely rule out a fight opposite Silva despite branding it a “lose-lose” situation.

Loading...
Denial of responsibility! NewsUpdate is an automatic aggregator around the global media. All the content are available free on Internet. We have just arranged it in one platform for educational purpose only. In each content, the hyperlink to the primary source is specified. All trademarks belong to their rightful owners, all materials to their authors. If you are the owner of the content and do not want us to publish your materials on our website, please contact us by email – [email protected]. The content will be deleted within 24 hours.
Loading...
AndersonAnderson Silvabest sports newsDoesntGuyJakeJake Paullot

Pokemon GO: What are Azelf’s weaknesses?