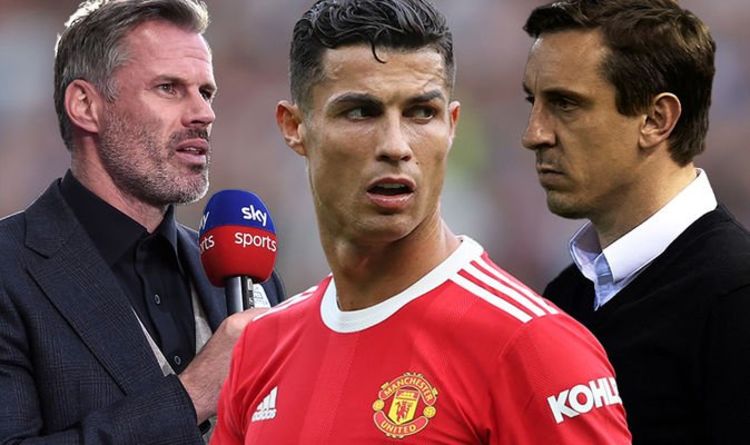 Jamie Carragher and Gary Neville have clashed while debating one of football’s eternal questions: Cristiano Ronaldo or Lionel Messi? The Sky Sports pundits opted to discuss two of the game’s greatest players ahead of Everton vs Burnley in the Premier League on Monday night.

The debate has surfaced once more after both Ronaldo and Messi changed clubs during the summer transfer window.

Ronaldo has, of course, rejoined Manchester United from Juventus, while Messi moved from Barcelona to Paris Saint-Germain on a free transfer.

Carragher and Neville both came armed with statistics to back up their arguments, but they could not reach an agreement in the greatest of all time debate.

Here is a transcript of the most fiery part of their discussion on Sky Sports’ Monday Night Football programme.

“If you think about the impact from a player and what is the greatest of all time, I’ve never really answered it, but you look at the stats.

“Messi’s goals and Ronaldo’s goals, there’s no doubt Messi has scored an obscene amount of goals, he’s a ridiculous player. It’s a hypothetical question. But for me, apart from the wrong-footed goals, the headers, Ronaldo’s scored 30-40 per cent more with his wrong foot, and he’s scored more penalties. It took me to a point where he’s more complete.

“The last part, the most important thing, is that international record of the most international goals ever. He’s won five champions leagues with teams not as good as Messi’s teams. The Ballon d’Ors are similar, Messi’s won more league titles with that Barcelona team.

“The Champions Leagues along with the variety of goals he’s scored leads me to think he’s the best player of all time.”

“Ronaldo is not the greatest player of all time

“His mate here is. [Messi]. You talk about who you’d want coming off the bench, Messi has scored twice as many goals from the bench as Ronaldo has ever scored. That’s ridiculous what you say about him coming off the bench because he can score different types of goals. “It doesn’t matter. Even if Messi scores more with his left foot, and the stats prove he scores more goals than Ronaldo.

“Two wonderful players, but what Ronaldo does and all the attributes in terms of heading, free-kicks, I completely agree. In terms of the complete player and doing things Messi couldn’t in terms of weak foot and in the air.

“Messi takes you to a place where you can’t believe what you’re seeing. Ronaldo does things other players can do.

“You’ve seen someone score a great header before, free-kicks, all those things. Messi can do things we’ve never seen before, and yes it’s close. But in terms of goalscoring, that’s not right.

“I think there’s been a lot of fanfare in terms of United and best players, and I think you [Neville] got a bit carried away.

Neville is a big fan of Ronaldo (Image: Sky Sports)

“I think you got carried away by saying there’s no way you can say Ronaldo is the best player of all time, it’s definitely Messi.”

“That’s their opinion. I just said I was asked if there was one player I could bring off the bench to win me a match in history, I would choose Ronaldo.”

“Hang on, you’ve just said he’s the greatest player of all time. Why can’t United win the title?

“The greatest player of all time cannot take Manchester United to the title?”

“The introduction of Ronaldo at 36 as a penalty box striker, I don’t think will make them a complete enough team to win the title.

“If he was still the player he was at Real Madrid, he might be able to take them to the Champions League.”

“You said Kane, Varane and Sancho would win them the league.”

“Kane would get more involved in the build-up, he’d glue the team up more, he’d get the same goals as Ronaldo.

“I don’t think Ronaldo will get involved in the build-up. He’ll be a poacher. I think United will fall short of winning the league this season.

“We’re talking about two things here, the greatest player of all time, a player who has had an 18-year career, assessing that career, and a player who at 36 will he take the team to the title? They’re two different things.

“However, caveat that by if that atmosphere and spirit I witnessed and saw on Saturday, if that momentum builds, he could do something spectacular.

“I don’t think it’ll happen because I think City and Chelsea have better teams than United.”

“Would Messi win them the league?”

“Would you swap Ronaldo for Salah or Kane?”

“I think because of his age, United are going to get a cameo out of Ronaldo, an absolute cameo.

“Kane will be there for five or six years. If you said Haaland or Ronaldo, I’d go for Kane or Haaland. This is a cameo.

“I think United needed a winger, they got Sancho. I thought they needed a forward, they got Ronaldo. I’m delighted in the short-term.

Denial of responsibility! NewsUpdate is an automatic aggregator around the global media. All the content are available free on Internet. We have just arranged it in one platform for educational purpose only. In each content, the hyperlink to the primary source is specified. All trademarks belong to their rightful owners, all materials to their authors. If you are the owner of the content and do not want us to publish your materials on our website, please contact us by email – [email protected]. The content will be deleted within 24 hours.
Loading...
Loading...
best sports newsCarragherCristianodisagreementFieryGaryJamieNevilles

When is the first game of the 2021-22 NBA season? A closer look at early predictions for the opening day fixture