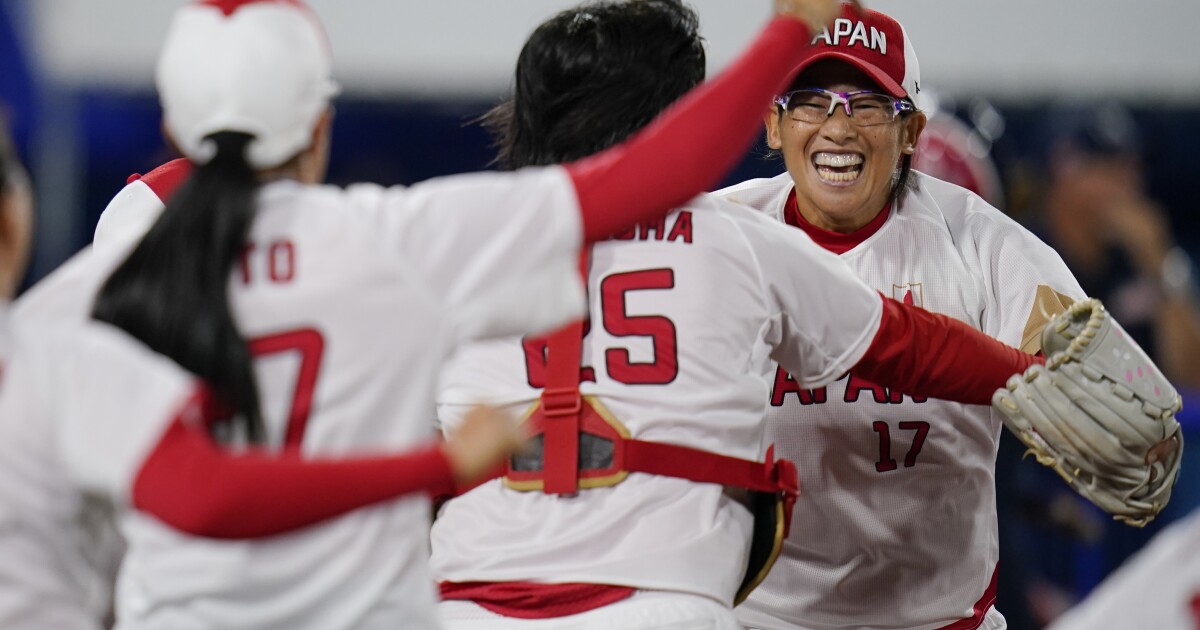 For the U.S. softball team, one long excruciating wait will be followed by another.

Thirteen years after falling to Japan in the gold medal game at the Beijing Olympics, the U.S. endured another frustrating finish here against its chief rival ahead of an uncertain future for its sport.

Yukiko Ueno, the gutsy Japanese ace who outdueled Cat Osterman in 2008, did so again Tuesday night at Yokohama Baseball Stadium, pitching six strong innings during a 2-0 victory in the gold medal game at the Tokyo Olympics.

With a runner on second base and one out, U.S. slugger Amanda Chidester ripped a line drive toward third baseman Yu Yamamoto. The ball ricocheted off Yamamoto’s forearm and into the glove of shortstop Mana Atsumi, who then doubled off the runner at second base.

Japan then went back to its ace.

After giving up a leadoff single in the sixth inning and departing the game, Ueno returned to start the seventh and retired the side in order after former UCLA star Delaney Spaulding popped out to catcher Haruka Agatsuma to end the game.

The U.S. players huddled in their dugout in a giant scrum of bodies, arms around one another, before turning to wave to their counterparts in congratulations.

Meanwhile, overcome by the emotion of the moment, Ueno wept after having held the U.S. to two hits while striking out five and walking two.

There had been smiles and high-fives among the Americans prior the game’s first pitch. Before she turned and walked into the pitcher’s circle, Osterman playfully bumped hips with third baseman Kelsey Stewart. Everybody seemed loose.

The vibe would quickly turn tense.

In her final Olympic appearance as player, Osterman couldn’t complete one clean inning. Japan stranded a runner in scoring position in the first and second innings before Atsumi drew a walk on a full count leading off the third.

That prompted U.S. coach Ken Eriksen to replace Osterman with Ally Carda, the former UCLA star who has dominated Japan in international competition and held it to one unearned run in 5 1/3 innings on Monday.

Carda stranded the inherited runner but gave up the game’s first run in the fourth inning as Japan continued to exert pressure. Yamato Fujita ripped a single off diving second baseman Ali Aguilar’s glove before moving up on a bunt and a groundout. Fujita scored after Atsumi chopped a slow roller to Aguilar and dove into first base ahead of the throw, representing the first earned run the U.S. has allowed in these Olympics.

It wouldn’t be the last.

Japan doubled its lead in the fifth inning after Yu Yamamoto reached out and slapped a two-out single behind second base. Eriksen turned to left-hander Monica Abbott, the only other returning U.S. player from the Beijing Olympics. But the move backfired when Abbott unfurled a wild pitch, allowing Yamamoto to take second base before Yamato Fujita ripped a run-scoring single to right, emphatically pumping her arm in celebration after giving a team a 2-0 advantage.

Meanwhile, Ueno had long settled into a rhythm, retiring eight consecutive outs before Aguilar drew a walk leading off the bottom of the fifth. It became meaningless after Ueno retired the next three batters.

A day earlier, the U.S. had rallied for a 2-1 victory over Japan after generating four hits and its runs over the final two innings of a game that did little more than make Japan designated as the visiting team.

The U.S. bats remained quiet this time late in the game. Japan looked very much at home.

There will be plenty of regrets to contemplate for the Americans by the time the next pitch is thrown.

Denial of responsibility! NewsUpdate is an automatic aggregator around the global media. All the content are available free on Internet. We have just arranged it in one platform for educational purpose only. In each content, the hyperlink to the primary source is specified. All trademarks belong to their rightful owners, all materials to their authors. If you are the owner of the content and do not want us to publish your materials on our website, please contact us by email – [email protected]. The content will be deleted within 24 hours.
Loading...
best sports newsDefeatsGamegoldjapanmedalnews update sportsnewsupdate

Hamilton can add 20 more wins to his record 100, says Brawn…