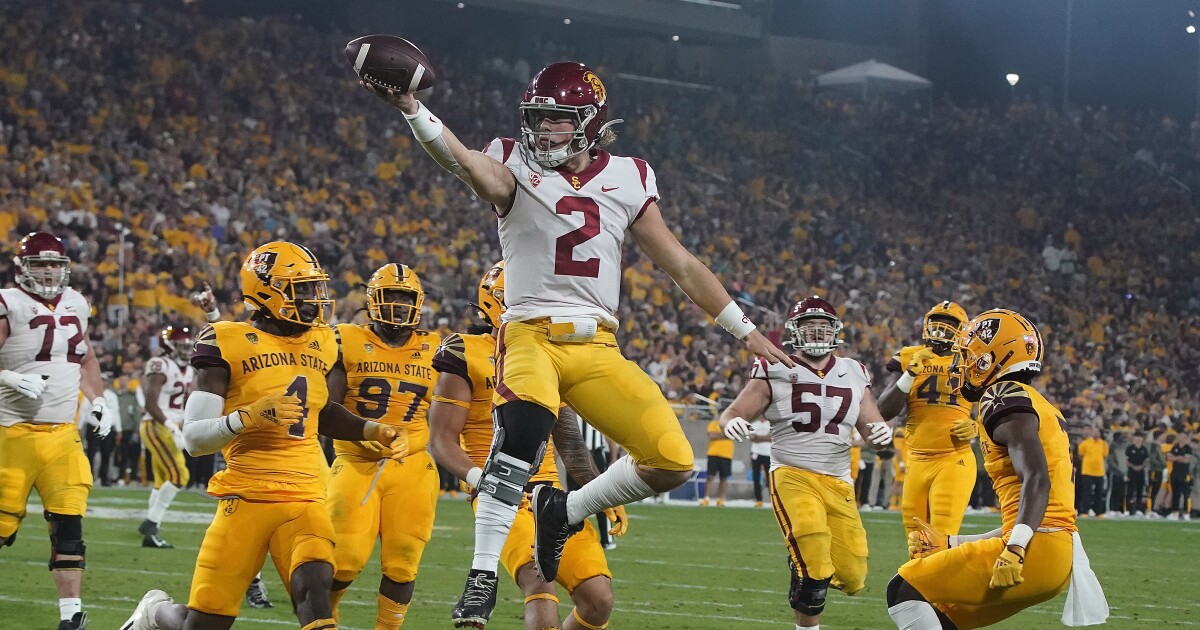 Jaxson Dart will make first start for USC in rivalry game vs. UCLA

With Kedon Slovis still sidelined by a lower leg injury and its season at a crossroads, USC will turn to dynamic freshman quarterback Jaxson Dart to make his first college start against UCLA on Saturday at the Coliseum.

USC interim coach Donte Williams made the news official during the Trojans Live radio show Monday night, breaking with his previous trend of not announcing the starter.

“Right now, Kedon, we still don’t like where he’s at right now just from a health standpoint, so he’s not truly able to go right now,” Williams said. “So Jaxson’s going to be our starter, and just like everyone else he’ll continue to fight for that until Kedon is back and fully into that competition.”

The severity of his injury remains unclear. Slovis didn’t appear to suffer any noticeable injury during USC’s 31-16 loss at Arizona State on Nov. 6 and even spoke with reporters after the game. Williams made note of minor injuries to both quarterbacks during his postgame comments, but he didn’t seem concerned about the long-term outlook of either.

Slovis hasn’t practiced in the nine days since. Last week, as he watched from the sideline at practice, he wore a compression sleeve on his knee and walked with a slight limp. When discussing a possible return to compete with Dart, Williams was cryptic about his starting quarterback’s status the rest of the season.

“It’s an injury, and you don’t know where that may take you,” Williams said.

The two quarterbacks were already splitting reps as part of a rotation that rendered both largely ineffective. Slovis has been the more consistent of the pair under those circumstances, while Dart remains the more dynamic option as a dual threat. It was Dart in the driver’s seat for the fourth quarter of a 41-34 win against Arizona on Oct. 30. Then, Slovis came in on USC’s decisive drive in Tempe, only for the Trojans to go three and out and punt.

USC’s game scheduled for this past Saturday at California was rescheduled for Dec. 4 because of COVID-19 cases among the Golden Bears after the Pac-12 granted Cal’s request to avoid a forfeit.

Now, it’s Dart who will take the reins for USC in its crosstown rivalry with UCLA. The Trojans (4-5, 3-4 Pac-12) need to win two out of their remaining three games to qualify for a bowl bid, making Saturday’s game against the Bruins (6-4, 4-3) especially crucial for their postseason hopes.

For Dart, it will be the first of likely many starts as USC’s quarterback. What it means for Slovis and his future could prove a bit more complicated.

Denial of responsibility! NewsUpdate is an automatic aggregator around the global media. All the content are available free on Internet. We have just arranged it in one platform for educational purpose only. In each content, the hyperlink to the primary source is specified. All trademarks belong to their rightful owners, all materials to their authors. If you are the owner of the content and do not want us to publish your materials on our website, please contact us by email – [email protected]. The content will be deleted within 24 hours.
best sports newsDartGameJaxsonnews update sportsnewsupdateRivalrysports news