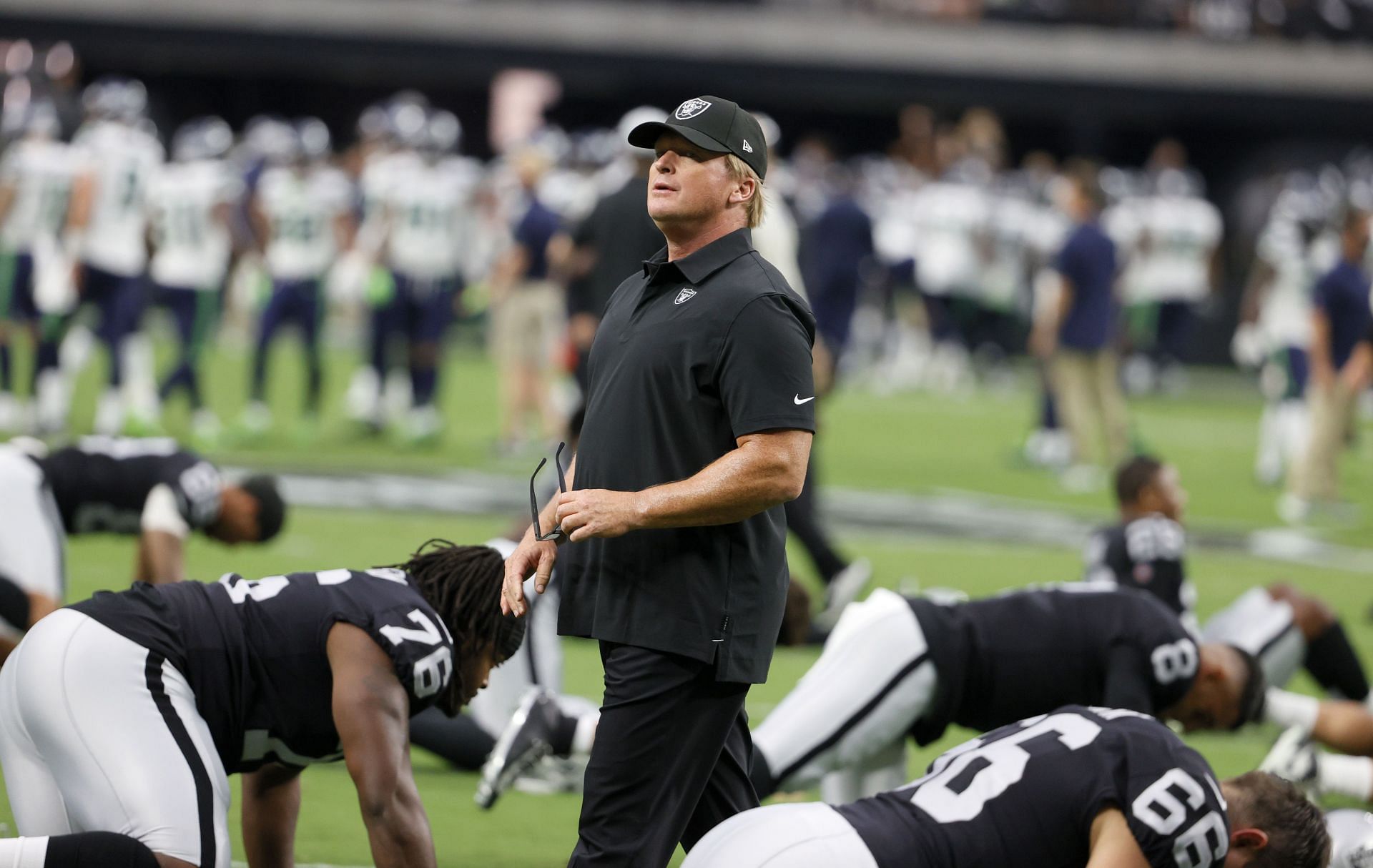 In an odd turn of events, it appears that Jon Gruden is now suing the NFL and Roger Goodell based on leaked emails that led to his resignation.

This is the latest news in the crazy saga that has existed between the Las Vegas Raiders and Gruden. A series of events started the NFL and Gruden down this path in early October and it now seemingly has no end in sight.

What happened that caused these emails to get leaked? And where does the NFL go from here in handling Gruden’s lawsuit?

The first email was released by The Wall Street Journal on October 8th. This email revealed racist language used by the 58-year-old football coach. The email was an exchange between Gruden and a friend, Bruce Allen, who was a higher-up that worked for the Washington Football Team at the time.

The initial email was about DeMaurice Smith, an executive board member of the NFLPA. Gruden’s email read: “Dumboriss Smith has lips the size of Michellin (sic) tires.”

The racist trope used by Gruden was made evident to the public, but there was no course of action taken by the Raiders organization, which was odd.

On this day, more emails were released to the public, this time by The New York Times. This second round of emails contained further horrendous language in regards to former NFL player Michael Sam. Gruden claimed the NFL was being made to include gay players in their ranks.

Gruden also used a homophobic slur multiple times when referring to NFL Commissioner Roger Goodell. On top of the already-unacceptable language in that regard, Gruden was also very vocal and displeased that women were now being allowed to referee NFL games.

The same day these further damaging emails were made public, Gruden resigned from his position as head coach of the Raiders. Whether the Raiders forced Gruden out has not been made public or evident.

How did the NFL and reporters obtain these emails?

Gruden being outed as a particularly awful human being was a happenstance created by the NFL’s investigation into workplace conditions that involved the owner of the Washington Football Team, Dan Snyder.

Gruden and his lawyer have officially made statements in regards to the leaked emails, which claim that the NFL has essentially had it out for Gruden and used his emails to get rid of him altogether.

Former #Raiders coach Jon Gruden is suing the NFL and Roger Goodell in Nevada district court, alleging they sought to destroy Gruden’s career and reputation through a “malicious and orchestrated campaign” that led to his resignation last month, Gruden’s attorney tells me.

Former #Raiders coach Jon Gruden is suing the NFL and Roger Goodell in Nevada district court, alleging they sought to destroy Gruden’s career and reputation through a “malicious and orchestrated campaign” that led to his resignation last month, Gruden’s attorney tells me.

It has now been a month since the entirety of these releases have happened, and Jon Gruden is suing the NFL. He claims that the NFL and Goodell banded together to destroy his career with a “malicious and orchestrated campaign.” Gruden’s lawsuit is being filed in Nevada district court.

Statement below from Jon Gruden’s attorney, Adam Hosmer-Henner, who filed the complaint Thursday in Clark County, Nevada court. Gruden is seeking damages on seven claims, as well as punitive damages and attorneys’ fees.

Gruden has no basis of fact for this case against the NFL. His emails were made public by reporters and investigators. His language cannot and will not be tolerated. The NFL is a place that welcomes inclusion and unity. There is simply no place for the comments Gruden made in the world of football or anywhere, for that matter.

Denial of responsibility! NewsUpdate is an automatic aggregator around the global media. All the content are available free on Internet. We have just arranged it in one platform for educational purpose only. In each content, the hyperlink to the primary source is specified. All trademarks belong to their rightful owners, all materials to their authors. If you are the owner of the content and do not want us to publish your materials on our website, please contact us by email – [email protected]. The content will be deleted within 24 hours.
best sports newsemailEventsGrudenJonJon GrudenJon Gruden Net WorthLas Vegas Raiders