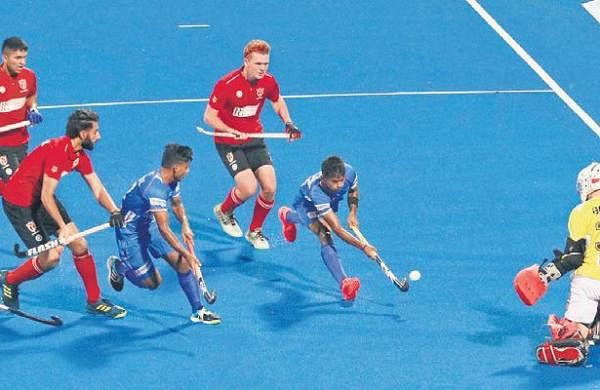 BHUBANESWAR:  In India’s first match against France, the latter seemed to be in constant dialogue. The entire XI either seemed to be egging on their colleagues or passing words of advice. In comparison, the Indian team was subdued, almost quiet. Save the goalkeeper Pawan who was a one-man radio unit, the others seemed to be cut off from the rest even if they were all inside one single turf. The lack of talking to each other perhaps contributed to that 4-5 reverse.

On Thursday, though, there was chatter, lots of it. You could hear a smattering of Hindi right from the first minute. That was one of the big differences as India, playing to remain relevant in the junior World Cup, ran out big winners against Canada. The other big difference was in the scoreline:13-1. These are the kind of things chief coach Graham Reid would have wanted to see, to see if the team was capable of identifying their mistakes, learning from it and course-correcting within 24 hours.

If they began slowly against France, they were on the money against the Canadians, who it has to be said came into the tournament without any sort of funding or competition to speak of since the pandemic began. “I am super proud of my boys, they had emptied their tank on the pitch and that’s all you can ask for,” was how their chief coach, Indy Sehmbi, summed up the game.

Reid will have privately echoed similar thoughts because this was his team giving a positive reaction after a loss. Eight minutes in, both Uttam Singh and Vivek Sagar Prasad had already sounded the board. The passes were flowing, the press was working and the visitors, boxed in for the majority of the match, had nowhere to turn on multiple occasions. That dominance ultimately showed as they scored six goals in the last quarter alone.

The biggest pluses from an Indian perspective two hours into the tournament is their nous of dead-ball situations. Sanjay, one of the team’s four dragflickers, now has two hat-tricks in consecutive days. However, this isn’t a team that just relies on creating penalty corner opportunities. They are equally adept at working angles for shots on goal, it’s one of Araijeet Singh Hundal’s strengths according to himself. The 6’2” forward, the other Indian to score a hat-trick, conceded as much after the match.

Denial of responsibility! NewsUpdate is an automatic aggregator around the global media. All the content are available free on Internet. We have just arranged it in one platform for educational purpose only. In each content, the hyperlink to the primary source is specified. All trademarks belong to their rightful owners, all materials to their authors. If you are the owner of the content and do not want us to publish your materials on our website, please contact us by email – [email protected]. The content will be deleted within 24 hours.
best sports newsCanadaCupHockeyIndia vs Canada Junior Hockey World CupIndiansJuniorjunior hockey world cup

Sihle Ntuli the path-breaker: The only black coach at Junior Hockey World Cup