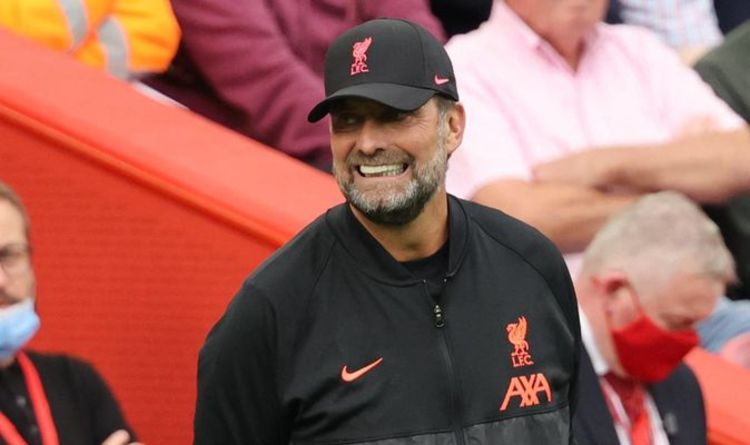 Liverpool have made an impressive start to the season, going unbeaten in their opening six matches, despite having a quiet summer in the transfer window. The Reds made just one signing in the off-season, yet their solid beginning to the 2021/22 appears to have justified the club’s approach.

While Manchester United, Arsenal and Tottenham were busy snapping up players, Liverpool made the decision to stick rather than twist.

Ibrahima Konate was signed for £36million from RB Leipzig to address the team’s long-standing difficulties in central defence, but he was alone in joining the red half of Merseyside.

Liverpool instead focused on keeping what they already had while moving on fringe players who were not in Jurgen Klopp’s plans.

Mohamed Salah, Sadio Mane and Roberto Firmino remain a work in progress, with contracts until June 2023, but sizable transfer fees were brought in from the sales of Harry Wilson, Marko Grujic, Taiwo Awoniyi and Xherdan Shaqiri.

JUST IN: James Rodriguez ‘in Qatar for talks’ as Everton spell fades

He was down to the bare bones in defence, with Nat Phillips, Ozan Kabak and Rhys Williams all playing valuable roles following the injuries to Van Dijk, Joel Matip and Joe Gomez.

Already this season we have seen the value of having players fit after an intense and productive pre-season.

After a slow and frustrating start at Liverpool, Kostas Tsimikas is now a viable alternative to Robertson at left-back.

The Greek international has started three of Liverpool’s five league games, all of which have been clean sheets, while also contributing an assist. Klopp can now give Robertson the rest he needs without dramatically reducing the quality of his side.

It is a similar scenario in central defence where Konate made his Premier League debut in place of Matip against Palace. The 22-year-old was far from perfect, but his arrival means Klopp has four top-class centre-backs to call upon.

Alexander-Arnold’s absence through illness was a blow, but again there was an able alternative: James Milner was absolutely superb at right-back, rolling back the years to dominate the individual statistics, despite playing against the dangerous Wilfried Zaha.

Liverpool scored all three of their goals from set pieces and the 3-0 scoreline flattered them a bit, but it was still a hugely positive afternoon for Klopp, who addressed the rotation in his post-match press conference.

“I don’t know what it says exactly, but we had to do the changes, that was clear,” he explained.

“We will rotate – we always rotated – but you see in the last line in the last years we couldn’t rotate really because there were always a maximum of two fit [centre-backs] very often – and the third one was already a midfielder.

“In midfield, hopefully we have the numbers to do it and we need that because this is the engine room of the team and we need to make the changes there.

“Up front, we have different opportunities as well, so that’s good. How often we do it… I didn’t make a plan already for the season, but as often as necessary and possible.”

The 2021/22 season will be a long and gruelling one for Liverpool as they attempt to fight on all fronts once again after a difficult preceding campaign. Klopp’s ability to rotate his squad could prove to be a defining factor.

Denial of responsibility! NewsUpdate is an automatic aggregator around the global media. All the content are available free on Internet. We have just arranged it in one platform for educational purpose only. In each content, the hyperlink to the primary source is specified. All trademarks belong to their rightful owners, all materials to their authors. If you are the owner of the content and do not want us to publish your materials on our website, please contact us by email – [email protected]. The content will be deleted within 24 hours.
best sports newsBoostFinallyJurgenkeyKloppLiverpoolnews update sports