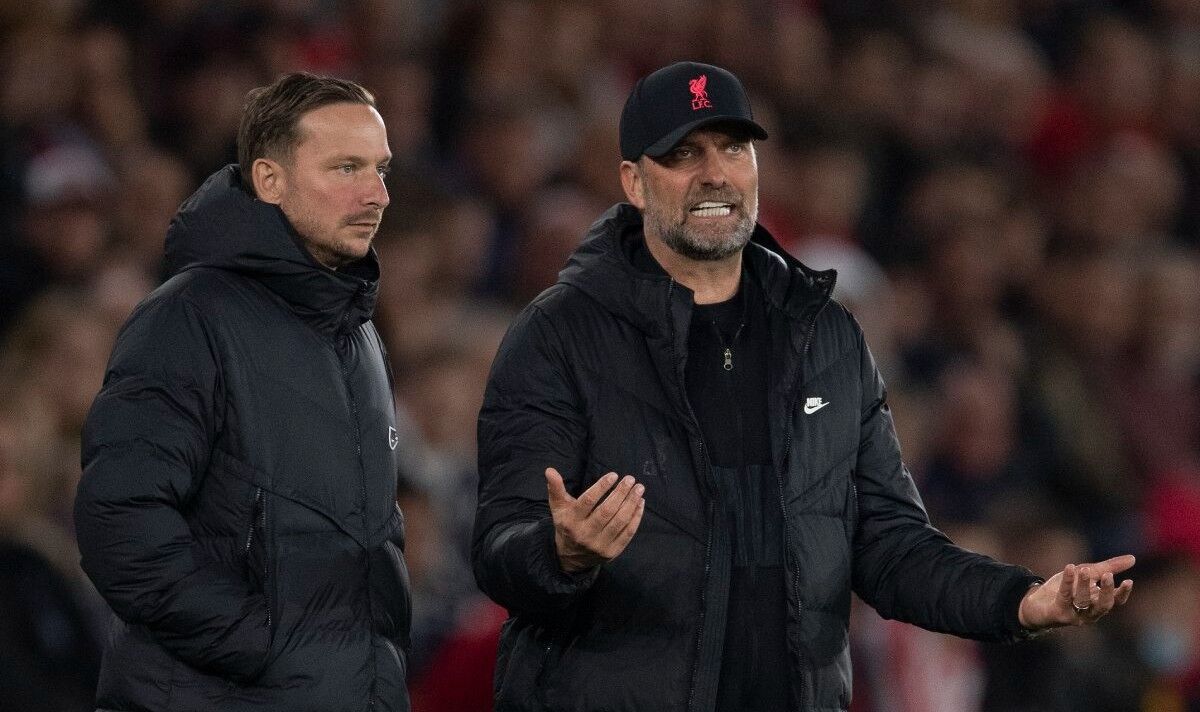 Liverpool assistant manager Pep Lijnders has revealed a three-word text he received from Jurgen Klopp on the morning after last season’s Champions League final defeat to Real Madrid. The Reds’ campaign was bitter-sweet, celebrating two major trophies but narrowly missing out on an extraordinary quadruple.

After lifting the Carabao Cup and FA Cup, Liverpool entered the final weeks of the 2021/22 season knowing they could be two games away from completing the first-time-ever feat. But despite beating Wolves on the Premier League’s final day at Anfield, Manchester City’s late comeback win over Aston Villa cruelly denied them a 20th top-flight title.

There was no time for anguish, with a stellar Champions League final showdown against Real on the horizon. But on an occasion marred by disturbing scenes out the Stade de France before a delayed kick-off, another night ended in disappointment for the Reds.

That said, you wouldn’t have thought the mood was sombre the day after as thousands of Liverpool fans lined the city’s streets to welcome home their heroes and celebrate winning both domestic cups. And in Lijnders’ upcoming book about the club, he revealed that Klopp was also positively reflecting on a memorable campaign rather than focusing on the downbeat finale.

JUST IN: Chelsea retaliate against Barcelona over Kounde with two deals off

In ‘Intensity: Inside Liverpool FC – Our Identity’, Lijnders wrote: “The morning after [the Champions League final], I woke up to a text from Jurgen: ‘What a season [love heart emoji].’ I respond: ‘We took everything out of it [love heart emoji].'”

Lijnders and his fellow assistant Peter Krawietz are set to stay at Liverpool until 2026 after Klopp signed a two-year contract extension in April. And there have even been suggestions the former could take over the managing mantle from Klopp when he departs Anfield.

All focus will be on the new season as Liverpool face the challenging prospect of improving on their largely successful 21/22 campaign. The £85million capture of Darwin Nunez will undoubtedly bolster Klopp’s options and smoothen the aftermath of Sadio Mane’s exit.

Many unsurprisingly expect Liverpool and Man City to go at it at the Premier League summit again, with both clubs also among the favourites for the Champions League once more. And Lijnders’ new book will be sure to provide fascinating insight behind the scenes at Anfield.

Pep Lijnders Intensity: Inside Liverpool FC – Our Identity, published by Reach Sport, on sale August 4 from liverpoolfc.com/store and reachsportshop.com.

Denial of responsibility! NewsUpdate is an automatic aggregator around the global media. All the content are available free on Internet. We have just arranged it in one platform for educational purpose only. In each content, the hyperlink to the primary source is specified. All trademarks belong to their rightful owners, all materials to their authors. If you are the owner of the content and do not want us to publish your materials on our website, please contact us by email – [email protected]. The content will be deleted within 24 hours.
best sports newschampionsJurgenKloppsLeagueLijndersLiverpoolsLoss

INTERVIEW | Chess Olympiad is going to be a big learning curve for me: Gukesh

Wordle 423 HINTS for August 16: Struggling with…

Come for the Broadcast, Stay for the Mets Game

W.N.B.A. Playoffs Preview: What to Know as the Sky Look to…

Everything you need to know about AMD Radeon™ RX GPUs for…