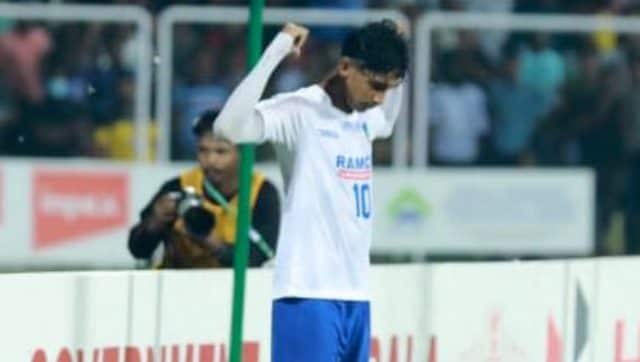 Jesin TK was one of the star performers as Kerala won the Santosh Trophy with thousands turning up to watch their matches.

A few days after FIFA launched the sports documentary Maitanam, celebrating Kerala’s love for football, the Indian state once again highlighted the kind of love the land and its people harbour for the sport through the Santosh Trophy tournament which became a national headline because of the support it received from the locals at the venue.

The 75th edition of the Santosh Trophy, a competition of regional and state association teams, which was hosted in the Malappuram district of Kerala witnessed thousands flocking to the Kottappadi and Payyanad stadiums to catch a glimpse of the beautiful game. The boisterous atmosphere during the games, which included chants, cheer, beats of the drum and music from the bands, became focal point of the tournament as much as the football. And it culminated with Kerala beating West Bengal in the final in front of more than 26,000 fans. The state team’s first competition win on home soil since 1993.

One of the stars of Kerala’s memorable campaign was the striker Jesin TK who finishes as the top scorer in the tournament with nine goals. The breakthrough performance for the 22-year-old came in the semi-final against Karnataka where he scored five goals after coming on as a substitute to inspire Kerala to a 7-3 win over Karnataka.

Jesin’s phone hasn’t stopped buzzing since Kerala lifted the trophy at the Payyanad Stadium. The media glare is not unexpected but it will take some time for “shy” Jesin to get used to.

“I have got a lot of calls. I am happy with the goals that I scored and happy that Kerala won the trophy. I am facing the media for the first time. Honestly, I am a feeling little shy facing the camera, since I don’t have the experience,” Jesin who isn’t very fluent in English tells Firstpost with his teammate Akhil P acting as a translator.

While the attention from journalists may have overwhelmed him just a bit, he found himself perfectly comfortable amid the raucous support his team and he received during the tournament.

“It was a dream come true to play in front of such a big crowd. Whenever we were on the ground they were supporting us and that allowed us to play the football we did. Our performance is because of the love that people from Kerala have shown us,” he says.

“My home is only 30 minutes away from the Payyanad Stadium, so most locals know me. They know about my game, and so I had a lot of support just for myself. I want to thank all of them for all the support. It was amazing.”

Jesin, who now holds the record for most goals scored in a match by a Kerala player in the history of the Santosh Trophy, has charted a unique route to the state team. He failed to make the cut for the district team but fortunately at 18 he was scouted by MES College Mampad, from where he was picked up for Kerala Premier League club Kerala United by head coach Bino George.

The young striker now hopes to take the big leap to the top level on the back of his impressive Santosh Trophy campaign. It has also been reported that he was linked with Kerala Blasters last season. The good thing now is that the young striker is getting calls from the agents as well, and not just the media.

“Now my aim is to play for the top-level clubs in ISL or I-League. There are many offers that I am receiving, there are calls from different agents but I am not sure where I want to go. But in the coming time, I want to take my career forward by playing at bigger clubs,” says the Kerala United player.

A veteran football strategist Bino George, an AFC Pro License coach, who also coaches the Kerala football team has played a major role in Jesin’s rise as a footballer despite setbacks in the past like not getting beyond the sub-district level.

“Bino George sir scouted me from a local college and I also play for him at Kerala United. He has had a big impact on me. My career has changed since I have come under him,” the striker says.

With his footballing life now making an upward rise, Jesin now also hopes to help his family financially with the support of the beautiful game. Currently, his father Mohammed Nizar, an auto-rickshaw driver, is the sole breadwinner in the family.

“My family is struggling financially now because my father is the only one who is working but I want to help my family in that regard and that remains my main aim,” Jesin says.

Denial of responsibility! NewsUpdate is an automatic aggregator around the global media. All the content are available free on Internet. We have just arranged it in one platform for educational purpose only. In each content, the hyperlink to the primary source is specified. All trademarks belong to their rightful owners, all materials to their authors. If you are the owner of the content and do not want us to publish your materials on our website, please contact us by email – [email protected]. The content will be deleted within 24 hours.
best sports newsbigdaresDreamFirstposthighSportsJesinKeralas