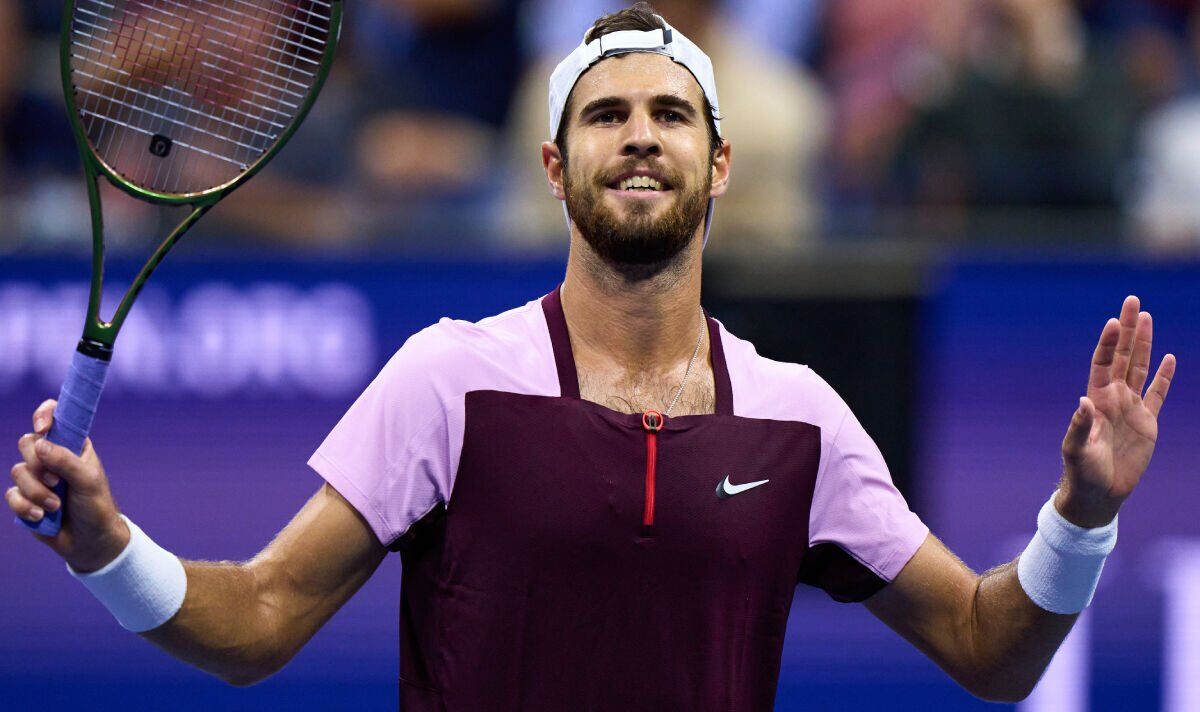 Karen Khachanov appeared to channel Daniil Medvedev after beating Nick Kyrgios to reach the semi-finals of the US Open. The Australian had been loudly backed inside Arthur Ashe Stadium all evening but Khachanov was able to secure a 8-5, 4-6, 7-5, 6-7 (3-7), 6-4 victory to reach the final four.

And the Russian, who was banned from Wimbledon in the summer, seemed to take umbrage post-match with just how one-sided the support inside the stadium was. In a similar manner to world No 1 Medvedev, Khachanov sarcastically thanked the New York crowd for their support in his on-court interview.

He said: “I did it. I did it guys. Thank you. Yeah I mean, now you’re giving me some love, thank you guys, I appreciate it. Thank you. It was a crazy match. I was expecting it to be like this. I’m ready to run, to fight, to play five sets. We played, again almost four hours and that’s the only way to beat Nick I think.”

The incident was similar to when Medvedev blasted the Australian Open crowd for being so pro-Kyrgios in his victory earlier this year. He said: “I came here to win this match and I’m happy I managed to do it… that’s the only choice when you get booed between first and second serve, it’s not easy so you just had to stay calm and win the match.

“Sorry I can’t hear you [interview Jim Courier]. Guys I can’t hear him, show some respect for Jim Courier he won here guys, thank you. Let him speak please guys, if you respect someone at least respect Jim Courier.”

“I’m really proud of myself, I was really focused from the beginning to the end and I got the win.” He added, looking to his box: “Thank you guys, my coach, my wife, my physio, my friend and agent. They’re here with me. They’re closest to me. I don’t like to see many people in the box, my mind is not clear.

“I want to see the people who I want in my box. Like this it works.” Previewing his semi-final against Ruud, who dispatched of Matteo Berrettini in straight sets in his own quarter-final: “I mean, I would like to win it! The deeper you go, the expectation rises up.

“I made the step forward, I made my first semi-final. I have nothing to lose, I want to go for it and be ready for the next match and hopefully it’ll be a good one.” Moscow-born Khachanov has only ever played Ruud once before, losing to the Norwegian at the Rome Masters in 2020.

Denial of responsibility! NewsUpdate is an automatic aggregator around the global media. All the content are available free on Internet. We have just arranged it in one platform for educational purpose only. In each content, the hyperlink to the primary source is specified. All trademarks belong to their rightful owners, all materials to their authors. If you are the owner of the content and do not want us to publish your materials on our website, please contact us by email – [email protected]. The content will be deleted within 24 hours.
Appearsbest sports newsdigFansKhachanovKyrgiosnews update sportsnewsupdate

The Game Awards 2022: Here are All The Award Winners…