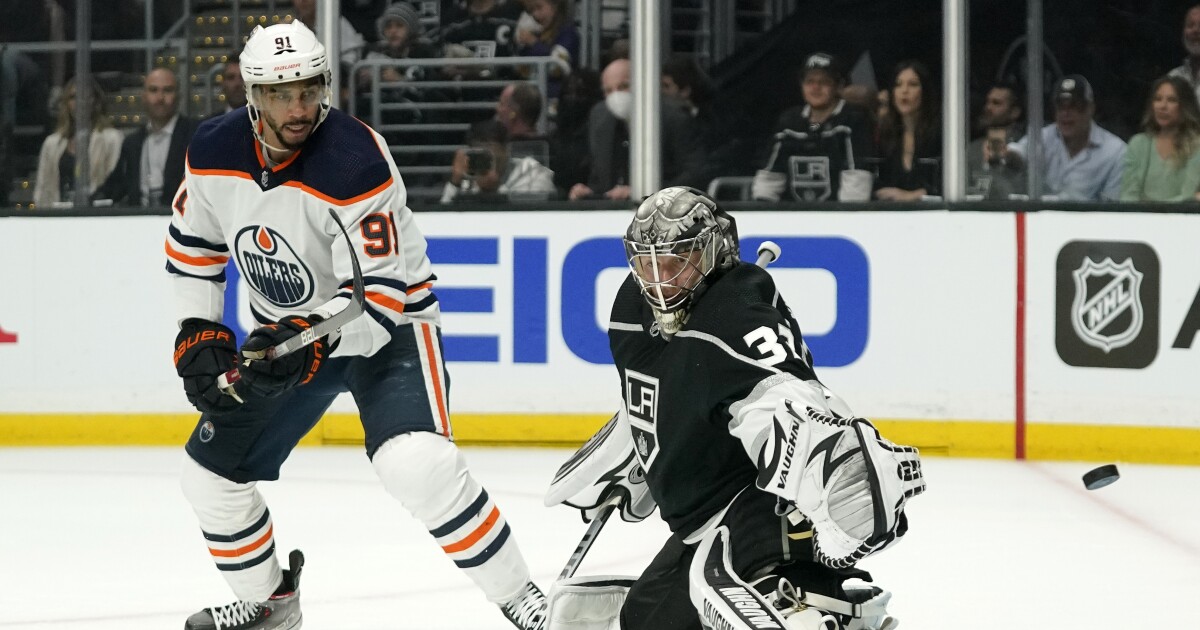 The bronze likeness of former Kings’ broadcaster Bob Miller, frozen in mid-wave outside Crypto.com Arena, was dressed for a celebration Friday, with dozens of black, white and silver balloons floating above and behind him as he stared, unblinking, over a stretch of Olympic Boulevard that had been taken over by a street festival.

Give Los Angeles a reason to party and you won’t have to ask twice for someone to throw one. In this case, it was the return of the Stanley Cup playoffs.

“There is pent-up excitement for sure,” said Arthur Whang, 48, a Woodland Hills employment lawyer and longtime Kings season-ticket holder. “There’s nothing worse than irrelevant games in the second half of the regular season.

How rough? Until Friday, the Kings hadn’t played a postseason game at home in more than four years; they haven’t won one here in eight years. The last home win was so long ago, in fact, the arena was still called the Staples Center then and Miller was a flesh-and-blood announcer, not a statue.

So call it the Curse of Bob Miller because the Kings haven’t tasted victory in a home playoff game since the Hall of Famer was cast in bronze. And even though the real-life Miller came back for a cameo during the pre-game show Friday, briefly sharing Star Plaza with his heavy-metal doppelganger, the hex continued with the Edmonton Oilers riding a hat trick from Evander Kane and two-goal performances from Zach Hyman and Ryan Nugent-Hopkins to an 8-2 victory.

That result extended the Kings’ playoff losing streak to six games and gave the Oilers a 2-1 lead in the best-of-seven series, which continues Sunday in Los Angeles.

The mood was buoyant outside the arena three hours before the opening faceoff, with a sun-splashed crowd in purple Kings’ jerseys and blue-and-orange Edmonton Oilers’ sweaters gathering in front of a stage to hear live music. Nearby, kids crowded into a small street hockey rink.

But after the puck dropped the celebration ended early for most in the sellout crowd, with Leon Draisaitl and Hyman giving the Oilers a 2-0 lead before many fans had found their seats. After Hyman’s goal — Edmonton’s fifth power-play score of the series — the building fell silent.

When Kane and Hyman doubled the lead with goals 75 seconds apart early in the second period, the silence turned to rumbles of disapproval. Kings coach Todd McLellan responded by pulling goalie Jonathan Quick, who had given up 13 goals in less than five periods, but that hardly stopped the bleeding with Kane welcoming back-up Cal Petersen to the ice with a goal two minutes later. Connor McDavid and Cody Ceci had two assists each for Edmonton.

The Kings eventually answered with second-period goals from Anze Kopitar and Phillip Danault, with Danault’s coming on the power play. That was significant since it was the team’s first score with the man advantage in 11 chances in the series.

After Edmonton pulled both those back in the third period on goals 81 seconds apart from Nugent-Hopkins, the stairways filled as fans headed for the exits. Kane scored his third goal with less than 20 seconds left in the game to seal the commanding win. The Oilers have outscored the Kings 16-6 in the series.

If the Kings’ postseason absence, their longest in a dozen years, seemed lengthy, for Whang, a fan since the 1990s and a season-ticket holder since 2013, it ended earlier than anticipated. He thought the team’s rebuild would take a couple of more seasons, making this playoff series a pleasant surprise — even if it’s one he doesn’t expect to last.

“I worry about this series, but it’s all gravy,” said Whang, who was decked out in a silver Quick sweater while his wife Lindsey wore a black No. 11 Kopitar jersey. “No expectations except to compete and learn. Of course, you hope they can pull a 2012 again.”

That was the season the Kings finished third in the Pacific Division, then caught fire in the playoffs, winning their first Stanley Cup on their home ice. They repeated in 2014, again lifting the Cup in Los Angeles.

Three years later Miller retired and the Kings, like the bronze broadcaster in front of their building, have been stuck in place ever since.

Denial of responsibility! NewsUpdate is an automatic aggregator around the global media. All the content are available free on Internet. We have just arranged it in one platform for educational purpose only. In each content, the hyperlink to the primary source is specified. All trademarks belong to their rightful owners, all materials to their authors. If you are the owner of the content and do not want us to publish your materials on our website, please contact us by email – [email protected]. The content will be deleted within 24 hours.
attackbest sports newsGameHelplesshighpoweredKingsLossnews update sports