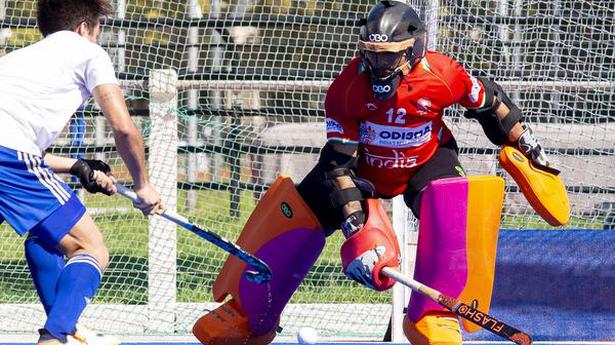 Young goalkeeper Krishan Pathak, who was one of the architects of India’s superb show against Argentina, said he wants to be in top form for the Tokyo Olympics and is eyeing another superlative performance against Great Britain in the FIH Pro League games next month.

The 23-year-old, who earned his 50th international cap during India’s tour of Argentina, played a big role in his side registering back-to-back victories against the reigning Olympic champion in the FIH Pro League this month.

“I am very happy to have completed 50 international caps. So much has happened in such a short space of time. I have had the opportunity to play in big tournaments and learnt a lot from my seniors,” Pathak said in a release issued by Hockey India.

“The coaches have always believed in my talent. I want to continue working hard and win games for India. Reaching this milestone makes me proud.”

While fellow custodian P.R. Sreejesh was brilliant when the visitor won the first match in a penalty shoot-out, Pathak was equally impressive during India’s 3-0 win over the host in the second game.

“I got to learn a lot from the Argentina tour. I know I have to prove my worth as a goalkeeper every time I am playing,” said Pathak.

“I feel we showed a lot of fight and character there. Over the past year, we’ve had good games against the top sides in the world and I feel that gives us the right kind of boost going into a tournament like the Olympics.”

India will play Great Britain in the FIH Pro League on May 8 and 9.

“We have to be focussed on the job at hand right now. Hope our good form continues against Great Britain,” Pathak said.

For much of his career, Pathak has been Sreejesh’s understudy and thinks the competition for places has only made him better.

“There’s so much one can learn from Sreejesh. He’s been playing at the highest level for so many years,” he said. “I have improved as a custodian in the last four years and that is because of what I have gathered and learnt watching people like Sreejesh and others play and train on a daily basis.”

Denial of responsibility! NewsUpdate is an automatic aggregator around the global media. All the content are available free on Internet. We have just arranged it in one platform for educational purpose only. In each content, the hyperlink to the primary source is specified. All trademarks belong to their rightful owners, all materials to their authors. If you are the owner of the content and do not want us to publish your materials on our website, please contact us by email – [email protected]. The content will be deleted within 24 hours.
Argentinabest sports newsgamesIndiaKrishanKrishan Pathaknews update sportsnewsupdate