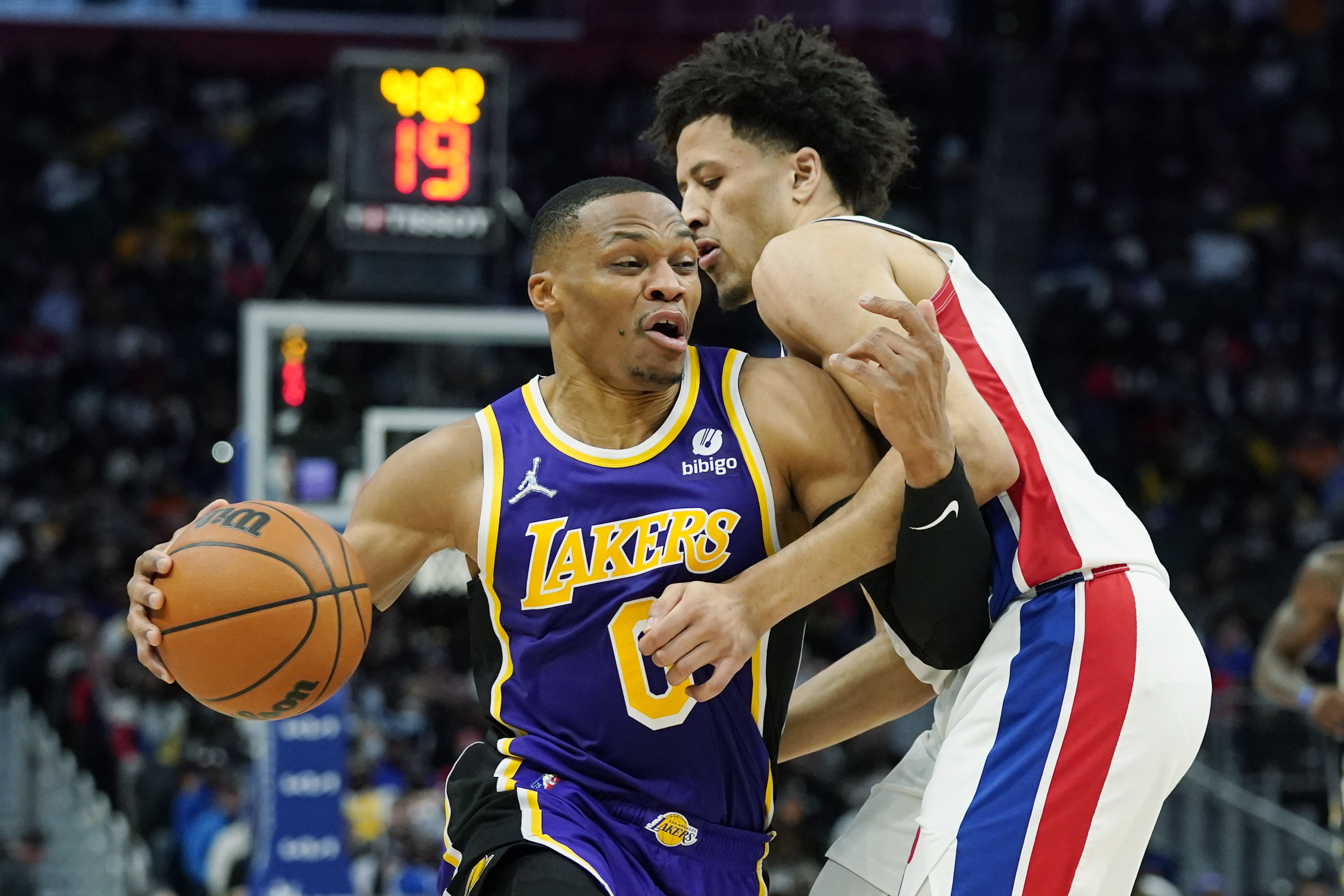 The Los Angeles Lakers bounced back from a disappointing 130-108 loss to the Boston Celtics on Friday night with a 121-116 win over the Detroit Pistons on Sunday to move to 9-9 on the season.

Sunday’s game marked L.A.’s first road victory since an Oct. 26 overtime win over the San Antonio Spurs. It was also LeBron James’ second game back after missing eight games with an abdominal injury.

The Lakers inconsistencies continued Sunday, and they didn’t play well for much of the game. However, they got the job done… but not without a little chaos.

A brawl broke out with 9:18 remaining in the third quarter after James elbowed Pistons center Isaiah Stewart while fighting for a rebound after a couple of foul shots from Jerami Grant.

Stewart fell to the floor, got up and confronted James immediately after being elbowed, bloody face and all. Both teams tried to separate the two, but Stewart charged back toward James and the Lakers multiple times before being forced to the locker room.

James was ejected for throwing the elbow (flagrant 2), while Stewart was also ejected for trying to fight the four-time NBA champion. It was just the second ejection of James’ storied career.

The Lakers and Pistons had to be separated multiple times after this play between LeBron and Isaiah Stewart. <a href=”https://t.co/im0o7fXeoI”>pic.twitter.com/im0o7fXeoI</a>

James was largely ineffective for most of Sunday’s game, recording just 10 points, one rebound and five assists before being tossed from the contest. However, James’ teammates didn’t do him any favors. Two starters — Avery Bradley and DeAndre Jordan — combined for six points, 12 rebounds and two assists.

If there’s one true positive from this game for the Lakers, it’s that Carmelo Anthony and Dwight Howard had solid performances off the bench, combining for 31 points and seven rebounds.

Grant has been one of Detroit’s best players this season, and he showed up big time against the Lakers on Sunday night. He kicked things off in the first half with 18 points on 7-of-12 shooting from the field and 4-of-5 shooting from deep, three rebounds, one assist and one steal.

Grant continued his impressive performance in the third quarter, tacking on 10 points, one rebound and two assists before closing out the fourth quarter with eight points.

Grant entered Sunday’s game averaging 18.1 points, 4.3 rebounds and 2.3 assists per game while shooting 40.1 percent from the field and 30.8 percent from deep. If the Pistons have any hope of finding success this season, they’ll need him to continue producing at a high level.

In addition to Grant, Cunningham was also spectacular. The rookie notched his second career double-double in just three quarters to help push Detroit over the edge. He had 13 points, eight rebounds, 10 assists and two steals entering the fourth quarter.

Cunningham also became the youngest player in Pistons history to record a triple-double, tacking on four rebounds in the fourth quarter.

It’s also important to note the Pistons got significant contributions from Hamidou Diallo and Frank Jackson off the bench. The duo combined for 32 points, eight rebounds and an assist.

Those bench contributions will be important for Detroit moving forward, but the team will also need more contributions from Stewart and Cory Joseph, two starters. While Stewart was ejected, he only had four points, one rebound, one assist and one block before being tossed in the third quarter.

The Lakers will move on to face the New York Knicks at Madison Square Garden on Tuesday, while the Pistons will host the Miami Heat.

Denial of responsibility! NewsUpdate is an automatic aggregator around the global media. All the content are available free on Internet. We have just arranged it in one platform for educational purpose only. In each content, the hyperlink to the primary source is specified. All trademarks belong to their rightful owners, all materials to their authors. If you are the owner of the content and do not want us to publish your materials on our website, please contact us by email – [email protected]. The content will be deleted within 24 hours.
best sports newsejectedFlagrant2IsaiahJamesLakersLeBronnews update sports