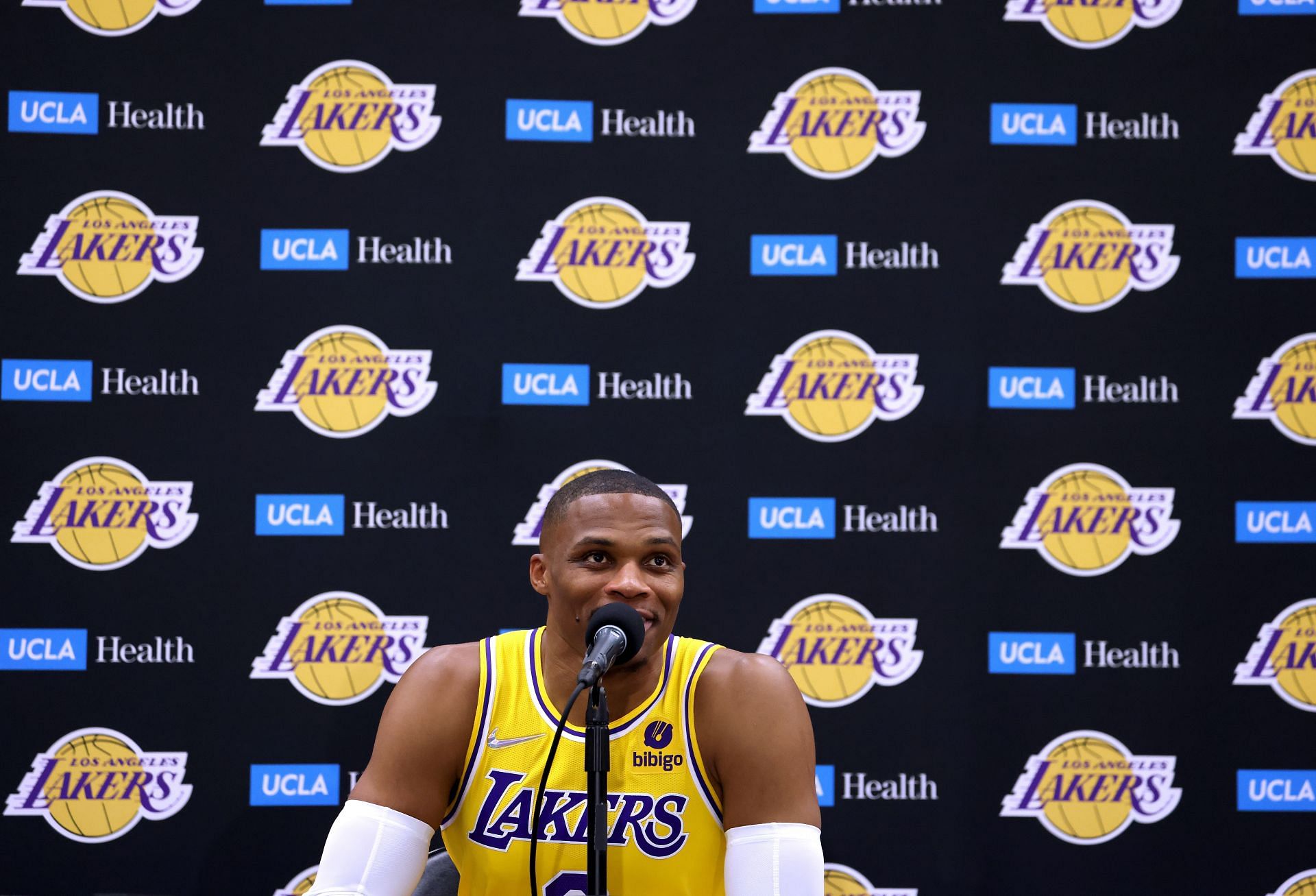 Superstar Russell Westbrook’s fitness with LeBron James and Anthony Davis after his blockbuster trade to the Los Angeles Lakers has been a highly debated topic throughout the offseason.

The Lakers were considered championship contenders prior to Westbrook’s trade, and even more so with the formation of their own big three to rival that of the Brooklyn Nets. However, Russ’ role has been contentious, with various NBA analysts pointing towards things such as his stat padding, lack of a reliable perimeter shot and inability to play off the ball as detrimental to the Lakers and LeBron James’ quest for a championship.

Skipp Bayless has been a vocal critic of Russell Westbrook for a while now and appeared on Fox Sports’ Undisputed to explain in detail why LeBron handing over the keys to Russ is a recipe for disaster. Here’s what Bayless said in the latest episode of Skipp and Shannon: Undisputed,

“LeBron is conceding the keys to the kingdom to Russell Westbrook and Russ is already playing completely out of control. This is a recipe for disaster.”

“LeBron is conceding the keys to the kingdom to Russell Westbrook and Russ is already playing completely out of control. This is a recipe for disaster.”— @RealSkipBayless

“LeBron is conceding the keys to the kingdom to Russell Westbrook and Russ is already playing completely out of control. This is a recipe for disaster.”— @RealSkipBayless https://t.co/QUmydG04x3

Bayless’ take seems alarming as Russell Westbrook has shown the ability to help elevate his teammates’ level of play due to his elite playmaking, with superstars such as Bradley Beal, Paul George and Kevin Durant all having career years while playing alongside him. Westbrook has taken his game to a different level come playoff time and has been unfortunate not to win an NBA title.

Like every other superstar traded to a different team, Russell Westbrook will take some time to adjust to the transition from a different offensive scheme as seen in the pre-season, but with high IQ veterans like LeBron James and Rajon Rondo on the roster, it will be a matter of time before he comes out firing on all cylinders.

Can Russell Westbrook win a championship with the Lakers and LeBron?

Russell Westbrook already has a first-ballot Hall-of-Fame worthy resume with numerous records to his name, but he still lacks the ultimate prize for any superstar in the league, an NBA championship.

Russell Westbrook has officially broke the record for most triple-doubles of all-time, now previously held by legend Oscar Robertson. Roberson has 181, while Westbrook now passes him with 182. Russ’ stats tonight: 23 PTS | 18 AST | 10 REB

Westbrook has been on multiple teams that could have been considered contenders, but this is the first time he has had a real chance to accomplish his goal of winning a title since he teamed u with Kevin Durant in OKC. The Los Angeles native has a once-in-a-lifetime opportunity to win a title for the franchise that he grew up supporting.

His trade to the Lakers has been highly debated in NBA circles, with former players and analysts swinging both ways. Westbrook has never been on a team with two top-5 NBA talents playing alongside him and he now has that luxury with a Lakers team featuring LeBron James and Anthony Davis.

His fit with both the aforementioned stars might be contentious, but both Westbrook and LeBron have showcased their ability to defer to another superstar. LeBron’s high IQ will be critical for the Lakers and Westbrook as they try to figure things out before going all guns blazing into a crucial post-season. Don’t be surprised if Westbrook has a career year while leading the Lakers to their 17th NBA championship.

Q. Can Westbrook win a title with the Lakers this season?

Denial of responsibility! NewsUpdate is an automatic aggregator around the global media. All the content are available free on Internet. We have just arranged it in one platform for educational purpose only. In each content, the hyperlink to the primary source is specified. All trademarks belong to their rightful owners, all materials to their authors. If you are the owner of the content and do not want us to publish your materials on our website, please contact us by email – [email protected]. The content will be deleted within 24 hours.
BasketballBaylessbest sports newsconcernDuosexplosionexpressesKind