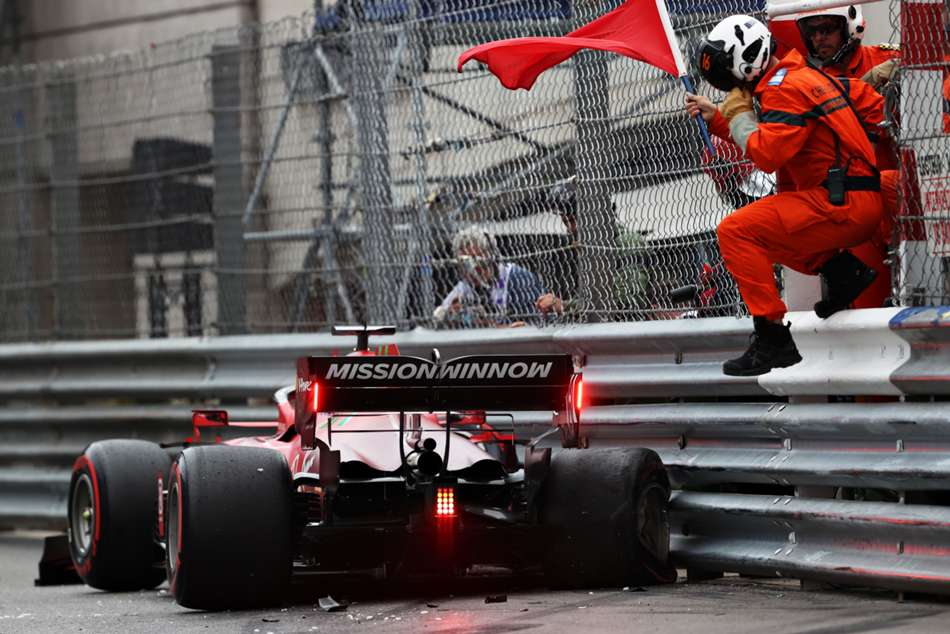 Ferrari driver Leclerc flicked off one barrier and crunched his car into another just as his rivals were building up to challenge his supremacy in the final minute of the session.

Championship leader Lewis Hamilton had to settle for seventh on the grid, a fortnight after registering his 100th career pole.

Leclerc admitted he was worried the impact and the damage to his car may mean its gearbox needs replacing, which would see him given a five-place grid penalty and hand over pole to Max Verstappen.

Reflecting on the sudden end to Q3, Leclerc said: “It’s a shame to finish in the wall. It doesn’t feel the same, but at the same time I’m incredibly happy about my first-time lap.

“The first corner was quite tricky. I didn’t do a great first corner, but then in the second and third sector I nailed it. I’m just very, very happy to be on pole.

“It was very, very difficult to manage myself mentally after Q2 – I could feel I was quite emotional in the car, but I told myself, ‘now it’s Q3 and it’s time to put everything together’, and I managed to do so.”

Leclerc might have left his fellow drivers frustrated with the timing of his crash, but the 23-year-old said: “I’m incredibly happy. It’s tomorrow that we score points, but I have to say that is a big surprise for everyone to be on pole and in fourth place for tomorrow.

Verstappen may have been primed to snatch pole from Leclerc on his final lap and said: “It was unfortunate, of course, with the red flag. I felt really comfortable. It was all going really well, but of course the red flag ruined the chance for pole, but we’ll see.

“You always plan around the best possible strategy and it was working out well – it’s just a shame about the red flag.”

Leclerc has been on pole seven times previously in his career but has yet to experience any success in Formula One at his home track.

Bottas was another driver frustrated to miss out on a clear final lap.

“For me it’s disappointing I didn’t get my last run with the red flag, but that’s how it is sometimes,” Bottas said. “I left everything out there for the last run.

“The first run [in Q3] wasn’t enough for pole, but in the second run with the first lap we did I was feeling good, I was quite a bit down on my lap time so I’m gutted.

“I think we made good progress throughout the weekend with the car. We should have had a shot at pole with the last run, so we’ll try everything we can tomorrow with the race. It’s Monaco; anything can happen.”

Fernando Alonso, a two-time former winner of this race, was knocked out in Q1 after managing only the 17th quickest lap.

Alonso, once a Ferrari driver but now at Alpine, said on BBC 5 Live: “Confidence was good. I was able to push the car and extract the maximum. We didn’t have the pace. The whole weekend we’ve been struggling a little with the pace.

“We would have expected more from Monaco on our package but we didn’t deliver. The race is going to be difficult, starting at the back, but let’s see what we can do.”

Lando Norris qualified fifth in the McLaren, but team-mate Daniel Ricciardo was a lowly 12th, while Pierre Gasly also finished ahead of Hamilton, taking sixth place.

Mick Schumacher, whose father Michael won this race five times, suffered a major blow in final practice when his Haas clattered heavily into roadside barriers after emerging from Casino Square.

Schumacher was not injured, but his team reported “chassis damage” to the sorry-looking car and pulled the 22-year-old out of qualifying.

Denial of responsibility! NewsUpdate is an automatic aggregator around the global media. All the content are available free on Internet. We have just arranged it in one platform for educational purpose only. In each content, the hyperlink to the primary source is specified. All trademarks belong to their rightful owners, all materials to their authors. If you are the owner of the content and do not want us to publish your materials on our website, please contact us by email – [email protected]. The content will be deleted within 24 hours.
best sports newscrashFerrarifrustratedGrandleavesLeclercMonaco

NASA’s Ingenuity helicopter’s mission with Perseverance has been extended

Hundreds Of PlayStation Games On Sale For $20 Or Less