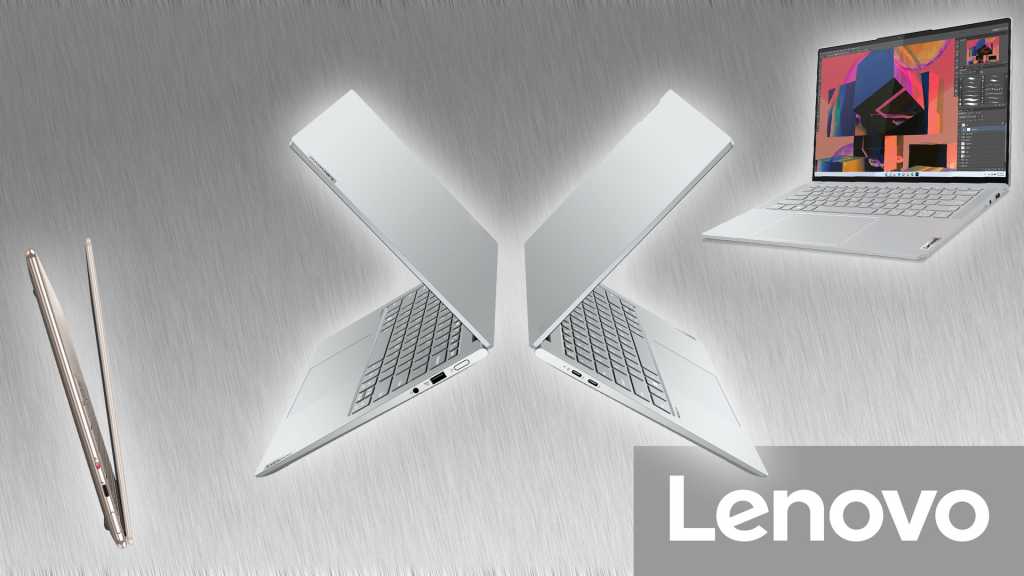 We’ve been eagerly awaiting the upgrade to Ryzen 6000 processors ever since we saw its amazing integrated graphics power. Lenovo is among the first to deliver for non-gaming laptops, refreshing its Slim line with both AMD and Intel options. The new laptops will start selling in May and June.

The Slim 7 is the entry-level clamshell of the line, starting at a strangely large 16-inch form factor with AMD’s new Ryzen 6000 series processors. Depending in your configuration you can go with a Ryzen 7 6800HS or Ryzen 6 6600HS, which come with the RDNA2-based Radeon 600M integrated graphics standard. If that’s not enough you can upgrade to an RTX 3050 or 3050 Ti discrete card. The standard configuration comes with 16GB of DDR5 RAM, with an upgrade to 32GB available, and storage comes from a Gen4 512GB or 1TB upgrade. You’ll want some pixel-pushing power if you plan on gaming on that that 2560×1600 16:10 touchscreen. The design comes with a full-sized SD card slot and USB-C for charging, though you’ll have to use a proprietary charger if you go with discrete graphics.

The Slim 7i is the same laptop design, but using Intel’s 12th-gen processors and Arc A370M discrete graphics. You can choose between a Core i7-12700H or Core i6-12600H CPU, but oddly it’s only available with 16GB of RAM. The storage is also downgraded to PCIe Gen3. Also note that the 7i version only comes with a proprietary charger.

There’s also a 14-inch version of the Slim 7 and 7i, though the AMD variant won’t be available in the US. The smaller laptop uses either a 2240×1400 or 2880×1800 screen with an OLED upgrade available on the higher-res option. Ryzen 5, 7, and 9 6900HS all come with integrated graphics, while Intel CPUs can be paired with RTX 2050 or MX550 discrete graphics or a Xe integrated GPU on the P-series.

The 14-inch Lenovo Slim 7i will be on sale later in May starting at $1200, but expect to pay a lot for those OLED upgrades.

This smaller 13-inch version of the Slim 7i uses a thinner, lighter magnesium alloy frame (carbon fiber interior, hence the name) that starts at just 2.2 pounds. Internals come in Intel flavor only, but this slimmer model uses an i7-1260p or i5-1240p with integrated Xe graphics. DDR5 memory comes in 8, 16, and 32GB capacities, with the same 512GB/1TB options for storage.

The Slim 7i Carbon will cost $1300 to start when it arrives in June.

Okay Lenovo, that’s enough laptops with “Slim 7” in the title. This super-duper-ultimate version of the clamshell design is 14 inches, comes in both Intel Core 12th-gen (i5 or i7) and Ryzen 6000 series (5, 7, and 9) flavors, and offers integrated and discrete graphics for both models. The screen for all models is an impressive 3072×1920 highly accurate IPS, with support for Nvidia G-SYNC if you go for the GTX 1650 or RTX 3050 graphics upgrade.

Along for the ride is either 16GB of 32GB of DDR5 memory (slightly faster on the AMD model) and PCIe 4.0 SSDs in 512GB or 1TB capacities. Despite the discrete graphics options, all models will charge with USB-C (Thunderbolt 4 on Intel models). The Intel version also sports an HDMI port; the AMD version gets an extra USB-A instead. With the improved screen, graphics, and input, the Slim 7i Pro X is a good bit heavier starting at 3.5 pounds.

The AMD versions of the Slim 7 Pro X start at $1500, with the Intel 7i Pro X versions starting at $1700. And check out that optional baby blue finish!

Despite the increase in title, this one is using the same 14-inch form factor as many of the laptops above, but with a sleek rounded body encased in “3D glass.” Low-voltage Intel 12th-gen processors are on offer with 16GB or 32GB of DDR5 RAM and 512GB or 1TB of storage. You can get any graphics you want, so long as you want integrated Xe.

Unlike even the loftiest of the 7 series, an OLED screen comes standard, with choices between 2880×1800 and 3840×2400 resolution. I/O is limited, but you do get three USB-C Thunderbolt 4 ports and a standard audio jack for good measure. Despite the .6-inch build, Lenovo says the 75Whr battery can last for up to 15 hours.

Denial of responsibility! NewsUpdate is an automatic aggregator around the global media. All the content are available free on Internet. We have just arranged it in one platform for educational purpose only. In each content, the hyperlink to the primary source is specified. All trademarks belong to their rightful owners, all materials to their authors. If you are the owner of the content and do not want us to publish your materials on our website, please contact us by email – [email protected]. The content will be deleted within 24 hours.
Arcbest technology newsgraphicsIntellaptopsLenovosnews update technewsupdate

Apple not accepting your credit/debit card? Here is how to make the payment