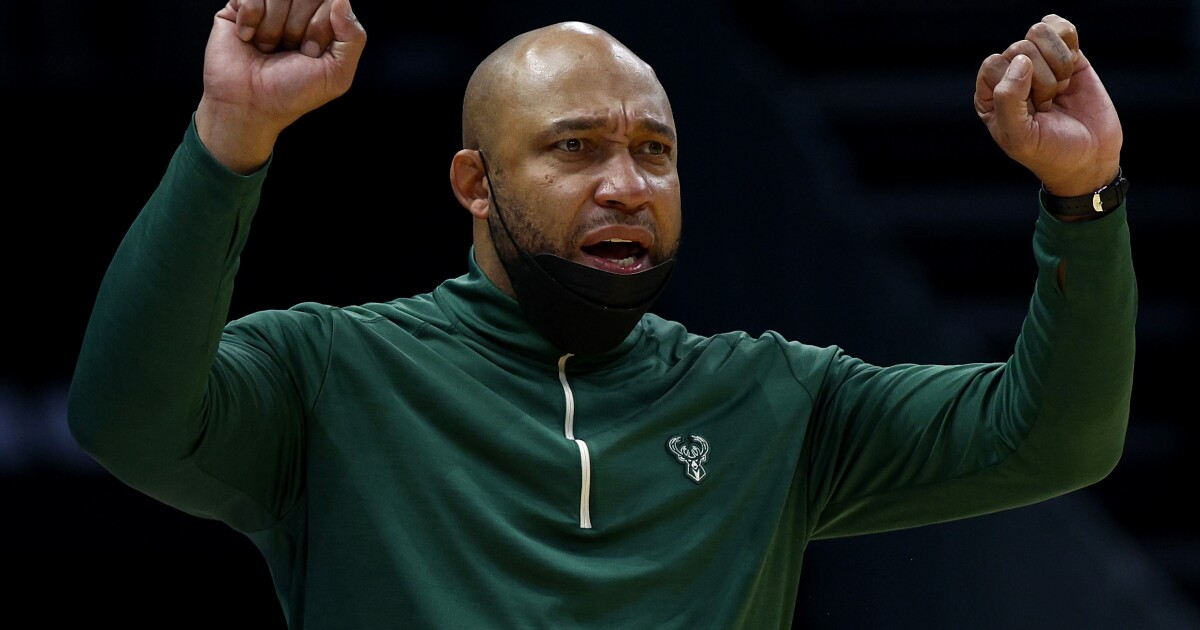 Why exactly? I really want to know why they hired Ham. Nice guy? Check. Good communicator? Check. NBA experience as a player and coach? Check. What I can’t find is his expertise with an offensive scheme or defensive one. I can’t find his history of leading a group to the playoffs and developing a championship culture.

This hire to me has a recurring smell to it. This is a guy that will be the ultimate yes man to the front office and LeBron James. There really is no other reason. Last year I said the Russell Westbrook trade would be the worst ever, it was and is. This will be the worst head coaching hiring ever. Mark my words!

One can only hope that Darvin Ham will actually have something to say about the makeup of the Lakers, and not simply be added pork. Most fans will agree the franchise has had enough of that in recent vintage.

All the Lakers’ maneuvering has left the team with aging and surrogate general manager LeBron James, aging and without-a-fit Russell Westbrook, and always injured Anthony Davis. And not a first-rounder to rebuild the team till 2027 and 2029.

Welcome to purgatory Darvin Ham. Let’s see if you can last long enough to salvage Jerry Buss’ legacy, which his children have now completely run into the ground.

I can’t believe Bill Plaschke again suggested that the Lakers ought to hire Doc Rivers as head coach. It is well known that the Lakers’ roster is a hot mess, and Rivers would be the absolute worst option for coach. Granted, Rivers won a title with the Celtics, but he managed to get only one despite having the league’s most talented team. As head coach of the Clippers, he allowed the players to adopt the “Lob City” moniker, as they celebrated every dunk like kids on a playground rather than focusing on playing solid basketball. Consequently, the Rivers-led Clippers collapsed in the playoffs. Rivers’ tenure in Philadelphia hasn’t been any better.

Doc Rivers has coached the most teams blowing 3-1 playoff series leads in NBA history. Since the Lakers as currently constituted are unlikely to ever lead a playoff series 3-1, Lakers management needn’t worry about that in deciding whether to hire him.

Bill Plaschke’s love affair with Doc Rivers knows no bounds. Was Plaschke asleep in 2015 when Rivers did nothing with a Clippers team that had Blake Griffin, Chris Paul and DeAndre Jordan as starters and the best sixth man in basketball that year, Jamal Crawford? That team never made it past the second round in the playoffs nor did any other Rivers coached Clippers team. Rivers failed again this year with the highly regarded 76ers. Frankly, he is overrated.

Bill Plaschke’s article about “Kerr marks violence in more than silence,” is undoubtedly the most important and best “sports article” ever written in recent years.

Thumbs up to Steve Kerr for putting life (and sadly death) before basketball. I hope his remarks were loud enough to be heard in D.C.

Bill Shaikin’s coverage in The Times of the stadium property sale situation has been extensive and excellent, but it still confuses me. If the Angels play in Los Angeles, as Arte Moreno says they do, why is Anaheim involved in so much controversy?

In response to reader Mark Sherwin’s letter regarding the Savannah Bananas innovations to keep fans interested as a mockery of the game of baseball.

Quite obviously Mr. Sherwin has never been to a minor league game or heard of Bill Veeck. Because how could they disrupt the sacrosanct traditions of baseball such as head hunting, pine-tarring, gambling and trash can lid beating to steal signs with mere mirth and joyous good fun?

I want to thank David Wharton for a fantastic job and riveting look at “Banana Ball,” as I thoroughly enjoyed it. I promptly sent it to everyone here in the Class A Salem Red Sox organization with the hopes of them scheduling the Bananas!

For those who wonder why people get so invested in sports, I’d direct them to Bill Plaschke’s excellent article about the Marshall High softball team. The scoreboard is only the front door to a world of drama, characters, triumph and a million and one life lessons. Thanks, Bill, and congrats on a superb season to the winners from Marshall High School.

Denial of responsibility! NewsUpdate is an automatic aggregator around the global media. All the content are available free on Internet. We have just arranged it in one platform for educational purpose only. In each content, the hyperlink to the primary source is specified. All trademarks belong to their rightful owners, all materials to their authors. If you are the owner of the content and do not want us to publish your materials on our website, please contact us by email – [email protected]. The content will be deleted within 24 hours.
best sports newsCoachLakersLettersnews update sportsnewsupdateproblemsports

IPL Final: Rajasthan Royals invite Class of ’08, to felicitate them during the final | Cricket News – Times of India

Wimbledon order of play: When Rafael Nadal, Nick Kyrgios and…

Where Do Trae Young, Dejounte Murray Rank Among NBA’s…