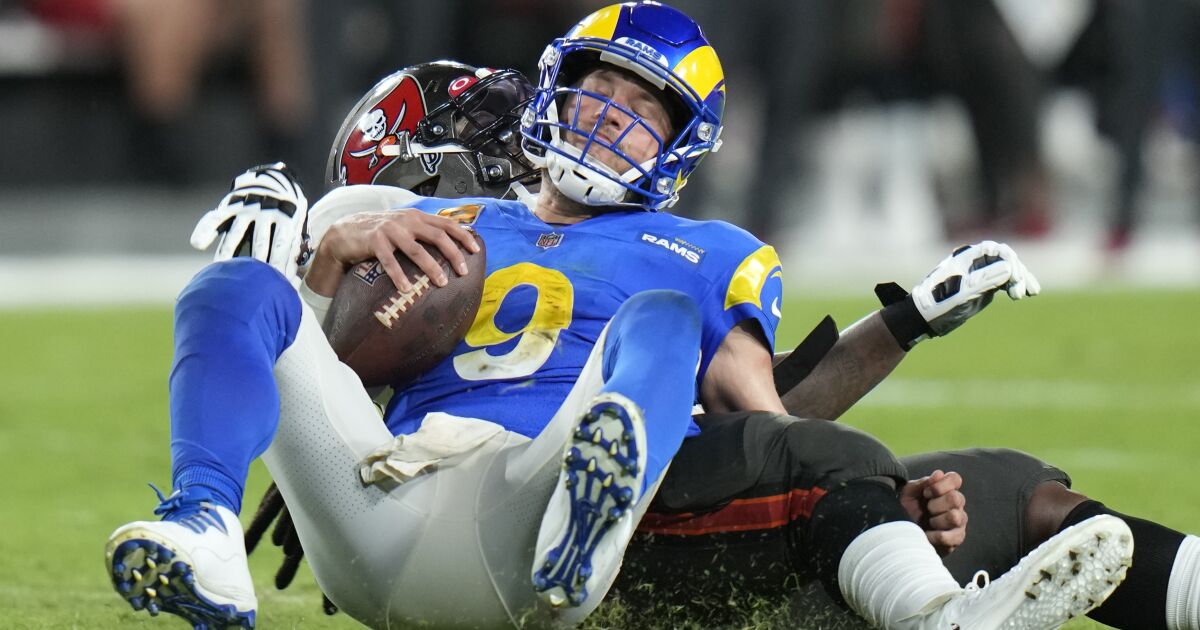 Letters to Sports: Rams, Lakers fall into the abyss

All the Rams really need is a quarterback who doesn’t have lead feet or turn the ball over repeatedly. It wasn’t all the Lions’ fault Matthew Stafford didn’t win there. And to give up picks and give him an extension as well? Do yourselves a favor and draft a blue-chip quarterback like the Chargers did. But wait, you need a high draft pick for that. I guess you’re stuck with what you have.

Really Sam Farmer, Matthew Stafford’s a “star quarterback”? Are you kidding? The guy who leads the league in interceptions and pick-sixes and you’re comparing or putting him in the same breath as Tom Brady? OK, you say he won a Super Bowl, but let’s face it, he was one dropped floater of an interception away from winning nothing. And if anyone won that Super Bowl it was the Rams defense and Cooper Kupp having a career year. The Rams got their one moment, but they also mortgaged their future, so call them what they are: a dynasty of one.

After the Rams’ embarrassing loss to Tampa Bay, Sean McVay said, “We got to really figure out a lot of different things to be able to do.” Actually, coach, it’s only one thing: win games.

Sean McVay has lost sight of the primary objective in pro sports: You play to win the game. If a first down will win the game, you make every effort to get a first down. The other team cannot score if they don’t have the ball. Period, end of story.

Of course it’s “not clear” when Matthew Stafford got a concussion. He’s been sacked about a hundred times this year. Take your pick.

Which is worse: The waves of nausea that hit me while watching the Rams attempt to play football or the uncontrollable laughing fits that deprive me of oxygen if I dare watch the Lakers?

Kudos to Dylan Hernández on trying to convey the insanity that was the MLS Cup championship game dramatically won by LAFC. One had to be there or have watched it on TV to have believed it.

A truly remarkable performance for a well-deserved championship by a winning franchise.

It’s ridiculous that a major sport’s title game is decided by a soccer skills demonstration (penalty kicks) and not continuing to play the game until there is a winner in overtime. Even the NHL doesn’t use shootouts in the playoffs.

As I watched LeBron James throw powder before the game, Russell Westbrook rock a baby and Anthony Davis flex his muscles after his baskets, I noticed a 2-10 record and multiple blowouts. Imagine if they would be as concerned with winning as they are with grandstanding. It seems their priorities are confused.

I’ve been a Lakers fan since they traded for Kareem in the 1970s, and a season-ticket holder since the early 1990s. Enough is enough. Jeanie Buss has destroyed what was one of the greatest brands in sports. A record of 7-34 against the Clippers in the last 41 games? Despicable. Take away the “bubble playoffs” and the Lakers have been dreadful for the most part since 2013-14.

In their first 53 years, the Lakers had eight losing seasons. After this year, it will be eight losing seasons in 10 years under Jeanie Buss. She has fired coaches, general managers and her brother. At what point does she look in the mirror and finally say, “I don’t know what the hell I’m doing”?

The Lakers season was clearly over before it began. I think it is time for the “Mitch Kupchak Please Stay Luncheon” for the season-ticket holders. Rob Pelinka will take over the starring role with guest stars Kurt and Linda Rambis providing the excuses. The season-ticket holders deserve an NBA team to cheer and not this garbage product they put on the court every game. The only other thing I am dreading is when the self-anointed King passes Kareem Abdul-Jabbar for the scoring record. The saving grace for Lakers fans is LeBron James will never ever be mentioned in the same breath as Kareem.

Seven night games for the Trojans this season. Personally I’m getting a little tired of reading about Trojans football in Monday’s paper. This won’t be happening in the Big Ten because of the different time zones, and joining a conference that has very few night games. Vaya con Dios Pac-12, enjoy your little conference and all the night games that go with it.

Isn’t it a bit disingenuous for The Times to be reporting the “snubbing” of the UCLA football team in the latest CFP rankings when The Times have been doing the same in their reporting vs. that of the Trojans since before the season began?

If there were no longer any Astros players or coaches on the team who were associated with the cheating scandal then I would say “congrats” instead of “yuck” for their World Series victory. There will always be a stench associated with this team.

It’s great to see Helene Elliott’s columns on hockey once a week or so, because she’s terrific and the short, bland Associated Press articles on Kings and Ducks games just don’t get the job done. I want the sports editor to know how disappointing it is to see a major newspaper like The Times give such short shrift to two local major sports franchises, the players and the fans.

I can understand, though not necessarily agree with, the idea that hockey writers don’t accompany the teams to away games. I can see The Times using Associated Press to cover those games. But The Times can’t even hire hockey sports writers to cover local games in downtown L.A. or Anaheim? Seriously? What a slap in the face to Kings and Ducks fans, as well as to the franchises.

Your lack of adequate coverage is a great disservice to the many hockey fans of both teams. If this is due to cost saving efforts in the sports department, I have news for you. I can engage in cost saving too. The way I’d do it is by stopping my subscription to The Times that I’ve maintained since the 1970s.

Am I the only one seeing the sad comparison between Bruce Rollinson of Mater Dei and Joe Paterno at Penn State?

No questioning the win-loss records, the championships and great players. And like Penn State the culture of win at all costs overshadowed the core values of the school and damage it did to kids. So the archdiocese lets Rollinson retire rather than subject the school to any more controversy. There was a statue of Paterno too.

Denial of responsibility! NewsUpdate is an automatic aggregator around the global media. All the content are available free on Internet. We have just arranged it in one platform for educational purpose only. In each content, the hyperlink to the primary source is specified. All trademarks belong to their rightful owners, all materials to their authors. If you are the owner of the content and do not want us to publish your materials on our website, please contact us by email – [email protected]. The content will be deleted within 24 hours.
abyssbest sports newsfallLakersLettersnews update sportsnewsupdateRams

We did not put up a good total on the board: Sachin Tendulkar on India’s semifinal loss against England

‘Diablo 4’ will offer players freedom from the main story