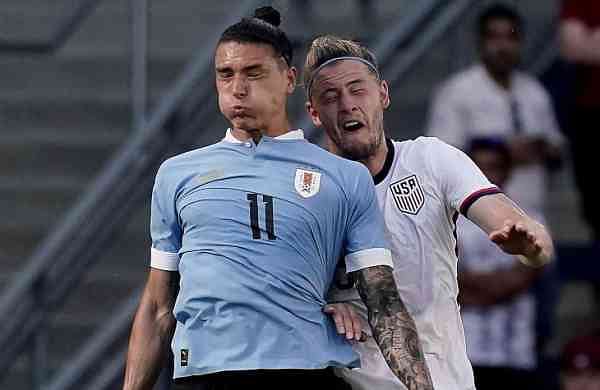 LISBON: Liverpool have reached a deal with Benfica to buy the Uruguay striker Darwin Nunez for an initial 75 million euros (£64 million), the Portuguese club said on Monday.

The 22-year-old, who was left out of Uruguay’s squad for Saturday’s 5-0 friendly victory over Panama, was expected to begin a medical on Monday which could take two days to complete.

Personal terms are not anticipated to be a problem, with the player having expressed his desire to play for Reds manager Jurgen Klopp despite interest from Manchester United.

Nunez is set to sign a reported six-year contract with Premier League and Champions League runners-up Liverpool, who have been in talks with Benfica for several weeks.

He netted in both legs of Benfica’s Champions League quarter-final defeat against Liverpool in April, earning praise from Klopp.

Nunez is likely to arrive at Anfield as a direct replacement for Sadio Mane after Bayern Munich stepped up their pursuit of the Senegal forward.

Liverpool have rejected two offers from the Bundesliga champions and are holding out for a fee in excess of £40 million for Mane, who has one year left on his contract.

Denial of responsibility! NewsUpdate is an automatic aggregator around the global media. All the content are available free on Internet. We have just arranged it in one platform for educational purpose only. In each content, the hyperlink to the primary source is specified. All trademarks belong to their rightful owners, all materials to their authors. If you are the owner of the content and do not want us to publish your materials on our website, please contact us by email – [email protected]. The content will be deleted within 24 hours.
agreeBenficabest sports newsDarwinDarwin NunezdealEurosLiverpool

Medvedev, Zverev No 1 and 2 on ATP rankings; Big Three miss out on top two spots for the first time since 2003-Sports News , Firstpost

Need for Speed to Be Revealed in July, Will Have Stylized…