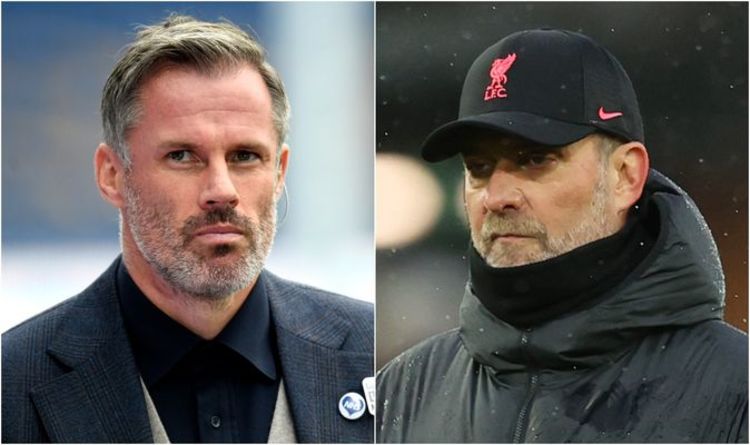 Liverpool manager Jurgen Klopp could be wise to listen to the transfer advice of Reds legend Jamie Carragher. The German missed a huge opportunity to put distance between his side and Arsenal in Thursday’s Carabao Cup semi-final first-leg tie, although the 10-man Gunners held on for an impressive 0-0 draw.

Despite suffering an embarrassing defeat against Nottingham Forest on Sunday, Arsenal have grown into a formidable opponent in recent weeks.

As such, Klopp can hardly be blamed for taking a cautious approach to his team selection, with Jordan Henderson and James Milner starting either side of Fabinho in midfield.

While that gave them the luxury of extra solidity against a confident side, it undoubtedly took away from the attacking threat which Liverpool have become known for under Klopp.

In fact, the home side failed to register a single shot on target until second-half stoppage time against their outnumbered opponents.

Creative sparks such as Curtis Jones and Alex Oxlade-Chamberlain began on the bench, and although both appeared in the second half, the performance highlighted a deficiency in Klopp’s squad.

Indeed, the Reds have been linked with a star who could give them plenty of solidity when on the back-foot, and plenty of threat going the other way.

When quizzed on who he wanted his former club to sign, Carragher touted Borussia Dortmund’s teenage midfielder Jude Bellingham.

The 18-year-old has become one of the first names on the team sheet in Germany, forging an exciting partnership with attacking sensation Erling Haaland.

While he has earned plaudits for his tenacious style of play and tough tackling, particularly considering his young age, Bellingham has also notched an impressive eight goal involvements in 16 Bundesliga matches this campaign.

Ultimately, that could give Klopp a missing ingredient – a player who can grab the game by the scruff of the neck without leaving the rest of his team-mates defensively vulnerable.

With the Birmingham City youth product enjoying his football out in Dortmund, there is little hope of a move unfolding this month.

But the Reds have still been tipped to move for the youngster during the summer, when owners FSG supposedly plan to revamp the squad after a series of quiet transfer windows.

They will inevitably have to fend off interest from the continent’s big hitters, although early career paths like those of Jadon Sancho and Demarai Gray suggest that Bellingham may favour a return to his homeland.

Whatever the case, his services will not come cheap, and Dortmund have supposedly slapped a whopping £101million price-tag on his head.

But the Reds have hardly splashed the cash over the past couple of years, and they would be getting their hands on a difference-maker for now and the future.

And nowhere more so could that have been more important than in Thursday’s clash with Arsenal, where a lack of well-rounded options led to a missed opportunity for Klopp and his Liverpool team.

Denial of responsibility! NewsUpdate is an automatic aggregator around the global media. All the content are available free on Internet. We have just arranged it in one platform for educational purpose only. In each content, the hyperlink to the primary source is specified. All trademarks belong to their rightful owners, all materials to their authors. If you are the owner of the content and do not want us to publish your materials on our website, please contact us by email – [email protected]. The content will be deleted within 24 hours.
Arsenalbest sports newsBossCarraghersdrawJamieJurgenKlopp