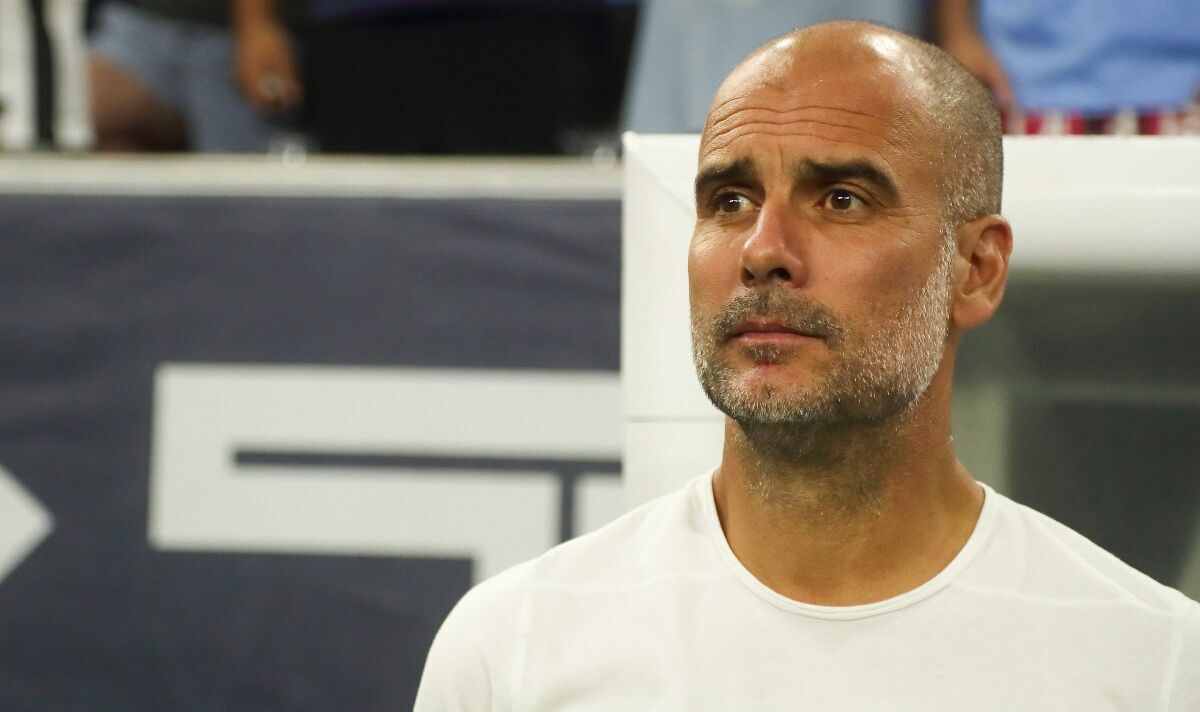 Sky Sports pundit Paul Merson has argued that Manchester City will go into the new season in a weaker position than last year following Pep Guardiola’s decision to sell Raheem Sterling, Gabriel Jesus and Oleksandr Zinchenko. Should the Arsenal legend’s prediction prove true it would be a welcome boost for Liverpool’s title chances after they were narrowly beaten by the Sky Blues to the Premier League last season.

City have actively sought to replace their outgoing stars, bringing in Kalvin Phillips, Julian Alvarez and most notably Erling Haaland in big money deals. The club have also been heavily linked with a move for Brighton left-back Marc Cucurella as a replacement for Zinchenko.

Despite this, Merson is convinced that they are now a ‘weaker’ proposition to what they were last year. In his column for the Daily Star the Sky Sports pundit claimed that their new attacking talents could struggle to adapt to the league.

“They are losing a lot of good players who have been important for them, and we don’t know how quickly the new signings will adapt,” the 54-year-old explained. “It wouldn’t surprise me if they start the season slowly, and you don’t want to give anyone a head start in this league or it can be hard to catch up.

“Erling Haaland and Julian Alvarez could turn out to be the best signings ever. Haaland could be unreal. But it takes time to get used to Pep Guardiola’s system.

“And it takes time to adapt to a new league and settle in a new country. There’s no guarantee it works straight away. I think it’s definitely: ‘Watch this space.”

Merson also cited the Premier League champions’ less than ideal pre-season. John Stones, Phil Foden and Ilkay Gundogan were all forced to miss the club’s American tour as a result of their vaccination status. The former England midfielder believes this could make the bedding in process for their new stars even harder.

“I saw this week that Pep is worried because a few of his players had to stay behind while the team went on tour, because they’re not fully vaccinated,” he wrote. “He will have to work on stuff like the team shape and pattern and he’s worried it will affect them, because this is all new to Haaland.

“It will be different to him than it is with Borussia Dortmund or Norway. Playing for City is a totally different ball game.”

Merson believes Guardiola will come to regret letting three of his most consistent players go particularly in the big games. Jesus, in particular, had an impressive record against most of City’s closest opposition.

“You’re taking away a lot of goals losing Raheem Sterling and Gabriel Jesus. Sterling fitted the system better than anyone – no-one else scores those far-post tap-ins.

“And Guardiola trusted Jesus in the big games. They were too reliable players. So was Oleksandr Zinchenko.”

It remains to be seen whether or not Merson will be proved right in his prediction for City next season. The picture will become clearer when the club get their season properly underway against West Ham on August 7th.

Denial of responsibility! NewsUpdate is an automatic aggregator around the global media. All the content are available free on Internet. We have just arranged it in one platform for educational purpose only. In each content, the hyperlink to the primary source is specified. All trademarks belong to their rightful owners, all materials to their authors. If you are the owner of the content and do not want us to publish your materials on our website, please contact us by email – [email protected]. The content will be deleted within 24 hours.
best sports newsCityGuardiolaLiverpoolManmessagemistakesnews update sports

RFU to vote on restricting transgender participation in women’s game

Exclusive: Base price for ICC media rights for India can…

Explore And Command An Army Of Wyverns In Upcoming Strategy…

FIFA bans AIFF | Why it happened and what it means for…