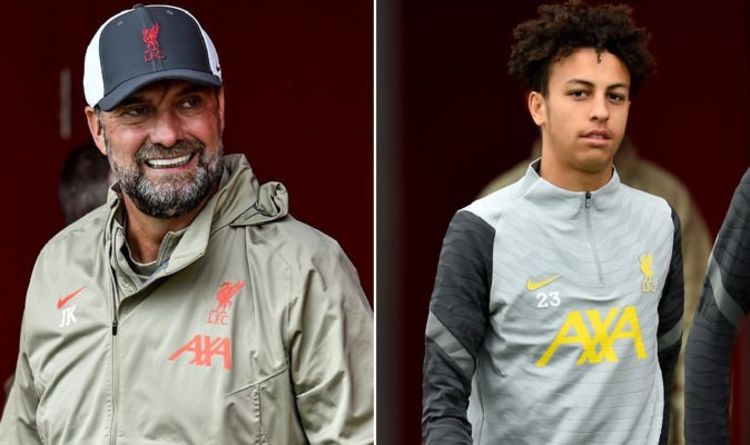 Liverpool take on Norwich, who they defeated in their opening Premier League game this season, at Carrow Road in the third round of the Carabao Cup tonight (7.45pm). Despite reaching the final of the Leagu Cup in Jurgen Klopp’s first year, the Reds have only got past round four once in the past four seasons and will hope for a deeper run into the competition this time around. Express Sport looks at the much-changed line-up Klopp could name in Norfolk.

Alisson has enjoyed a brilliant start to the season for Liverpool and was superb again at home to Crystal Palace at the weekend, producing several top-class saves for his fourth clean sheet from five league games.

But the Brazilian should drop out of the team for the first time this season to allow Caoimhin Kelleher his first outing.

The 22-year-old Irishman has been an unused substitute in Liverpool’s six Premier League and Champions League matches and was a dependable understudy last term when he played five times, conceding just three goals.

Kelleher had been primed to replace the banned Alisson away at Leeds United earlier this month before Brazil’s football federation backed down from enforcing a five-day suspension to players who did not report for international duty and gave permission for their No 1 shot-stopper to play at Elland Road.

Trent Alexander-Arnold missed the weekend’s win over Palace due to illness but it would be a huge surprise were he to start here, given he is highly likely to then start Liverpool’s next three games before the international break.

With James Milner likely to be moved into midfield after impressing at right-back against the Eagles and Neco Williams out injured, Conor Bradley should come in for his Liverpool debut.

The 18-year-old, a Northern Ireland international, is highly rated behind the scenes at the club and was not involved in the under-23s’ defeat to Leeds on Sunday which suggests he will at the very least be in the match-day squad to face Norwich.

Summer signing Ibrahima Konate made his debut against Palace while Joe Gomez played in the European Cup win over AC Milan at Anfield last Wednesday. Most likely here is that fifth-choice centre-half Nat Phillips comes in, probably to partner Gomez.

At left-back Kostas Tsimikas played over Andy Robertson for the visit of Palace but the Scot should once more be rested at Carrow Road given the Greek’s fine form this term.

Fabinho has started all of Liverpool’s past four games and completed the full 90 minutes on each occasion but should be afforded some welcome rest here, with the versatile Milner the most likely to step into the holding midfield role.

Thiago Alcantara and Harvey Elliott’s injuries mean Klopp will want to be careful with the likes of Naby Keita and Jordan Henderson, so another two changes should see Curtis Jones and Alex Oxlade-Chamberlain come in.

Jones impressed off the bench against Palace and will make his first start of the campaign while Oxlade-Chamberlain started and played an hour against Norwich in their league meeting on August 14.

Leighton Clarkson and Jake Cain might have been in the thinking for minutes in midfield had they not both headed out on loan for more consistent senior game time this season. Tyler Morton could be involved off the bench.

In addition to Bradley, there could be a second first-team debut for Liverpool in attack for wonderkid Kaide Gordon, who like Bradley did not play against Leeds on Sunday despite scoring twice in three under-23s games this term.

The 16-year-old, who turns 17 next month, shone in pre-season for the Reds and would give them a direct natural wide-man in the expected absence of Diogo Jota, Mohamed Salah and Sadio Mane.

Divock Origi should lead the line after giving his Liverpool career a new lease of life with an industrious showing – including a superb assist – in the 3-2 win over Milan last midweek.

On the left flank, Takumi Minamino is expected to get his first minutes of the season having yet to come off the bench in the league or in Europe, and the Japan international will know he needs to impress if he does start.

Roberto Firmino was not available for the win over Palace having yet to return to team training and it remains to be seen whether he will be fit enough for a place on the bench.

Denial of responsibility! NewsUpdate is an automatic aggregator around the global media. All the content are available free on Internet. We have just arranged it in one platform for educational purpose only. In each content, the hyperlink to the primary source is specified. All trademarks belong to their rightful owners, all materials to their authors. If you are the owner of the content and do not want us to publish your materials on our website, please contact us by email – [email protected]. The content will be deleted within 24 hours.
best sports newsdebutsExpectedLiverpoolNewsnews update sportsnewsupdateNorwich