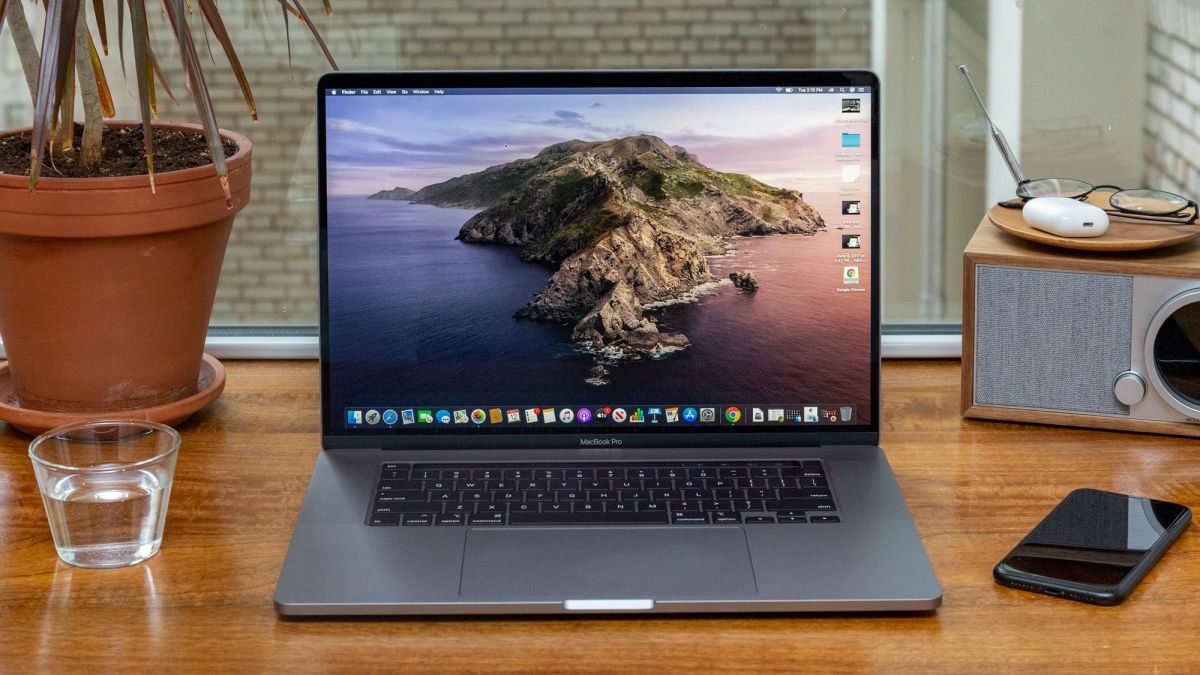 The MacBook 16-inch 2021 is poised to arrive at just the right time. The M1 MacBook Air and M1 MacBook Pro have rightfully been in the spotlight for ushering in a new age of Apple computing, but things are always moving forward. So it’s time to talk about what Apple’s next MacBook Pro 16-inch has in store.

Recent rumors paint a pretty fantastic picture. Not only is Apple expected to finally upgrade the MacBook Pro’s display, and the inclusion of the new Apple Silicon M2 chip, we’re also expected to see the return of some much-needed features from days gone by, including the still-mourned MagSafe charger. The MacBook Pro 16-inch 2021 is shaping up to be an incredible machine.

As great as the 13-inch M1 MacBook Pro has proven to be, nothing quite beats the joy of working on a larger screen. And since Apple’s first 16-inch MacBook Pro was very well received, we have exceptionally high hopes for the follow-up.

So far Apple hasn’t made any official announcements about future MacBooks, but word has been that the Macbook Pro 16-inch 2021will debut sometime during the second half of 2021.

Digitimes reports that the MacBook Pro with mini-LED display may be delayed until 2022, according to industry sources. But thus far this is the only publication reporting on this rumor.

Well-known Apple analyst Ming-Chi Kuo and Bloomberg’s Mark Gurman both expect a new wave of MacBooks to arrive later this year, available in both 14- and 16-inch options.

Kuo expects the new MacBooks to arrive sometime in Q2 or Q3, while Gurman reported that Apple was planning a release for the middle of the year. A recent DigiTimes report also corroborated the mid-2021 launch window, pointing to a Q2 debut.

Another leak has the 2021 MacBook Pro 14-inch tipped to release in the third quarter of the year, which adds credence to Kuo’s prediction but slightly knocks back Burman’s forecast. Time will tell which one is right.

Rumors haven’t divulged how much we can expect to pay for the new machine, though the current 16-inch MacBook model starts at $2,399 (£2,399). Considering the refreshed M1 machines cost the same as their predecessors, barring any major hardware changes we can reasonably assume that Apple will be prepping the 2021 16-inch MacBook pro to have a similar price tag this time around.

The biggest change set to come to the 2021 MacBook Pro is the loss of the TouchBar. According to Ming-Chi Kuo, the ever-changing touchscreen band is being replaced by a set of physical keys — presumably like the ones found on other laptops and pre-2016 MacBooks.

According to Kuo, this model will include a larger range of ports. This decision has been partly made to reduce the need for dongles, and it will also be the first time since late 2015 that a new MacBook has had anything other than USB-C.

The biggest news is that the MacBook Pro 16-inch 2021 is set to see MagSafe return to the MacBook for the first time in several years. We already saw a version of MagSafe launch with the iPhone 12 but that was a specialized wireless charging pad and not the break-away cable MacBook Pro users had been accustomed to. HDMI and SD card readers are also rumored to return. Another rumor seemingly confirms this, and says that the 16-inch MacBook Pro (as well as the 14-inch model) will have a 1080p webcam, SD card reader, three Thunderbolt USB C ports, an updated MagSafe port, and an HDMI port.

However, Gurman claims that the revived MagSafe will use a “pill-shaped” design, suggesting that it really is the same MagSafe remembers. He also confirmed that there will be some smaller design changes, including a brighter screen.

Apple’s older Butterfly keyboards had terrible reception, and thankfully it’s finally gone in favor of the new Magic keyboards. The new key mechanism received a much better reception, and it’s safe to say Apple will be carrying those over onto the 2021 MacBook Pro.

And for more outlandish design changes, one newly-discovered patent suggests Apple is considering adding an AirPower charger to a future MacBook Pro. The patent shows off wireless charging coils around the MacBook’s outer surface. That includes three in front of the keyboard (including one under the trackpad) and another nine behind the screen.

Patents are purely hypothetical, and there’s no guarantee we’ll ever see the MacBook turned into an AirPower-style wireless charging pad. Of course, it’s not the most farfetched idea, and it’s not like Apple doesn’t have the means to make it happen.

We’ve been hearing lots of rumors that the next iPad Pro will come packing a mini-LED display, but according to Ming-Chi Kuo that’s only the beginning of Apple’s plans.

Apple’s plan is reportedly to have multiple gadgets rocking mini-LED screens, including iPads, iMacs and MacBook Pros. There are a lot of advantages to having mini-LEDs, which use clusters of tiny LEDs for backlighting. This rumor is back in the news again, so we’re getting more reason to expect it.

The nature of display means it can offer deeper colors and blacks, better contrast, higher brightness, all while being more power-efficient. In other words, it’s a much better image, but with a fraction of the power consumption.

The iMac is almost guaranteed to have a mini-LED option in the very near future, especially given their benefits for professionals, but the fate of the 16-inch MacBook Pro is less clear. After all, mini-LED is still quite new, and thus expensive tech.

But the MacBook Pro was never intended to be a budget device. If any MacBook is going to get a mini-LED display this year, there’s a very good chance that it’s this one. And it would give us the brighter screen promised by Gurman.

There’s not a lot that we know about the specs of the MacBook Pro 16-inch 2021, but Ming-Chi Kuo has already predicted that it won’t have an Intel CPU. Instead, it’ll be Apple Silicon all the way, which is no surprise given how much better the M1 chip performed when compared to 2020’s Intel-based MacBooks.

A recent leak has claimed that Apple has booked production of a new M2 chip, set for use its next-gen MacBooks. Apparently, it’ll use a 4-nanometer process node, which in turn promises a bigger boost in performance but not at the cost of power efficiency.

With news that the M2 chip has now gone into mass production, it seems more and more likely that the MacBook Pro 16-inch 2021 will be bringing the M2 along for the ride.

That’s not to say power consumption is a big worry. The old 16-inch MacBook Pro offered 11 hours of battery with a 100 watt-hour battery, and the M1 MacBook Pro could reach 20 hours on battery nearly half that size. In other words, even if it does have higher power requirements, the MacBook Pro 16-inch 2021 should still have a stellar battery life.

As for battery size, FAA regulations mean 100-watt hours is the largest battery you’re allowed to take on a plane. So don’t expect Apple to go bigger than that. If the M1X is more efficient than the old Intel models, we could Apple offer a smaller battery while still offering a significant boost to battery life.

While there’s still a lot we don’t know about the MacBook Pro 16-inch 2021, what we’ve heard so far suggests we’re going to be getting one heck of a machine. Even if it doesn’t end up with ultra-premium features like the mini-LED display.

The biggest deal is the M1X chip. The original M1 absolutely wowed us with its performance, and the prospect of a newer chip that can do even more is very exciting. M1 was a great introduction to what Apple Silicon could do, but an overachieving second generation would firmly cement Cupertino as one of the top laptop chip makers.

And of course, the fact MagSafe is expected to return is another big win. Switching MacBooks to USB-C ports had a lot of advantages, especially since the rest of the industry followed Apple’s example. But people still mourn MagSafe’s untimely death to this day. Because, let’s face it, the iPhone 12’s MagSafe just isn’t the same.

Even if the next MacBook Pro 16-inch 2021 only has some of these features, we’re likely to see one fantastic piece of kit.

Denial of responsibility! NewsUpdate is an automatic aggregator around the global media. All the content are available free on Internet. We have just arranged it in one platform for educational purpose only. In each content, the hyperlink to the primary source is specified. All trademarks belong to their rightful owners, all materials to their authors. If you are the owner of the content and do not want us to publish your materials on our website, please contact us by email – [email protected]. The content will be deleted within 24 hours.
16inchbest technology newsdateleaksMacBooknews update technewsupdateprice

75 Days for Tokyo: ‘Staying focused on our mission despite the hurdles,’ say India Captains Manpreet and Rani