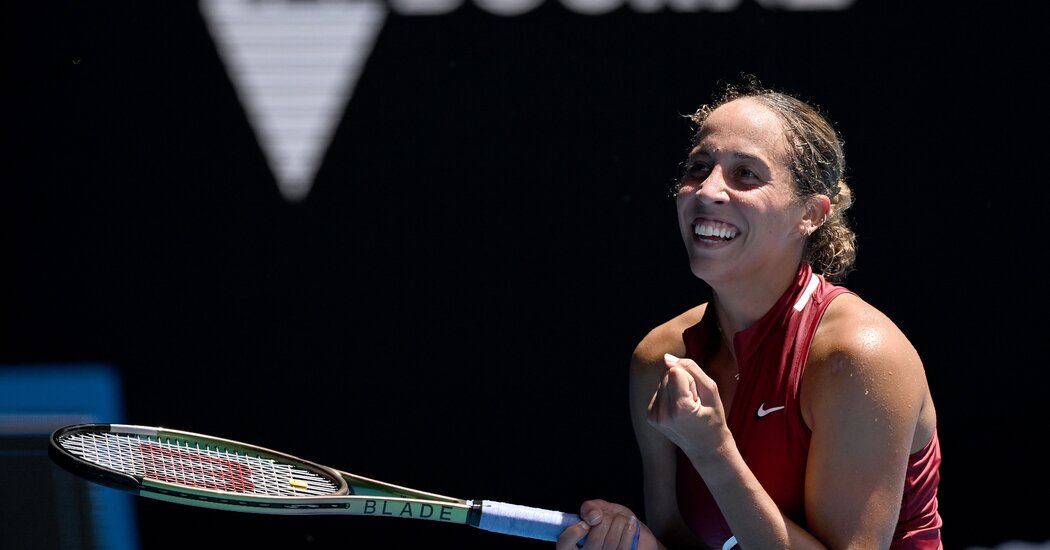 MELBOURNE, Australia — Before Madison Keys plays a match, her new coach Georgi Rumenov likes to remind her that “there is no need to, there is no have to.”

The message is that it is not about the implications or the expectations. It is all about the rally, the shot at hand.

That is easier said than achieved for Keys, an American tennis star who despite all the thunder in her serve and groundstrokes, has long struggled to find peace in the matches that matter most.

Last year, she found herself obsessing over results and comparing herself to her peers, tossing and turning at night and trying to calm her anxiety.

“I wasn’t sleeping as well,” she said. “Felt like there was literally a weight on my chest just because I became so focused and obsessed with it that I wasn’t enjoying really anything, because it’s all that I was thinking about.”

But even though tennis has one of the shortest off-seasons of any professional sport, it was long enough for Keys to change her thinking and form with Rumenov’s help.

After winning just 11 singles matches in 2021, Keys has won 11 in less than a month in 2022: taking the title in Adelaide and sweeping back into the semifinals of the Australian Open on Tuesday with a dominant victory, 6-3, 6-2, over Barbora Krejcikova, the No. 4 seed and reigning French Open champion.

“It means a lot,” said Keys, 26, who is unseeded this year after being ranked as high as No. 7 earlier in her career. “Last year was really hard, and I did everything I could with my team to really reset this off-season and focus on starting fresh and new and really just starting from zero and not worrying about last year. And wow, that’s going well so far.”

Keys has long played a high-risk game and she has, to her detriment under duress, often taken too much chance when in command of a point. There have been signs of progress in that department this year, as she has hit with more topspin and net clearance, and opted for placing the ball rather than pounding it.

“I’ve been working on it,” Keys said when asked about her approach. “As you said, it’s not something that I used to necessarily do in the past. Really just trying to be a lot more measured and just playing within myself a little bit more, not necessarily trying to hit a winner on that ball, just constantly trying to set the point up to get to the net to try to finish off on even the next ball. If it happens to be a winner, then it happens to be a winner.”

The winners keep coming in bunches. Her easy power remains. Keys hit 11 aces against Krejcikova, one of the world’s premier returners and a doubles champion before she became a singles champion. Keys dominated the short exchanges and as an Orlando resident seemed far more at ease in the humidity and heat with the temperature on-court surpassing 90 degrees.

Krejcikova struggled, putting her ice-filled towel not only around her neck on changeovers but on top of her head. Down 2-5 in the opening set, she called for the trainer and was also attended to by a tournament doctor, who took her blood pressure and temperature. Though her coach Ales Kartus was telling her from the stands that she should retire from the match, she persevered as the errors piled up.

Krejcikova declined to explain what was troubling her.

Krejcikova also struggled with breathing and dizziness on a muggy night in New York last year in a tempestuous fourth-round victory over Garbiñe Muguruza at the U.S. Open.

Krejcikova said she was not experiencing the same issues on Tuesday. “Today it was the heat that started to bother me after five games,” she said. “From there on, I just couldn’t put it together. Still, I didn’t want to end it up. I wanted to finish up. I wanted to try to do my best. I wasn’t really able to do that.”

Tuesday’s defeat guaranteed that Krejcikova, a tactically astute Czech player, cannot displace Ashleigh Barty at No. 1 in the next rankings. But she continues her rapid rise nonetheless. Outside the top 100 in 2020 in singles, Krejcikova has become a consistent threat in a women’s game filled with upsets and unexpected plot twists: Consider British qualifier Emma Raducanu’s run to the U.S. Open title last year.

It is Key’s turn to be the surprise so far in 2022. After dropping out of the top 50 by the end of last season, she is back in the final four in Australia, where she reached her first Grand Slam semifinal in 2015 at age 19.

“It mostly feels different because I’m seven years older, and it’s not my first semifinal of a Slam,” she said. “I think I’m a little bit more prepared this time around than I was all those years ago.”

Her opponent in that 2015 semifinal was No. 1 Serena Williams, the greatest women’s player of this era, who defeated her, 7-6 (5), 6-2, on her way to the title. Williams, now 40, is not playing in Melbourne this year, but Keys could face another No. 1 in Barty, who was to play American Jessica Pegula later on Tuesday.

Keys, who lost in the 2017 U.S. Open final to her close friend Sloane Stephens, has long been considered a potential Grand Slam champion. She is back in range again.

Chris Evert, who has known Keys since she trained as a teenager at the Evert Tennis Academy in Boca Raton, Fla., said it is apparent that Keys is enjoying herself on the court more than last year.

“I’m seeing a very calm and focused Madison who is in control and managing her emotions like never before,” Evert wrote in a text message. “I’m seeing a fit and healthy Madison who is moving really well in and out of corners and not hitting risky shots because she can’t get back in the court. Her serve is almost unreturnable.”

Evert added: “She had to find this place of calm herself, in her own time, no one could teach her this. I am thrilled for her. No one deserves a crack at a Grand Slam title more than her.”

But Keys has been on tour long enough to know that thinking ahead is not the right approach for her. As Rumenov keeps telling her, “there is no need to, there is no have to.”

Staying in the moment is the focus.

“I think that’s really important,” she said. “I think it’s still something that I don’t think anyone is perfect at. You can kind of lose that even throughout a match, just getting a little bit ahead of yourself. I think I even did that today early in the second set. I think the biggest key is just being able to reel it back in and then refocus very quickly and catch yourself.”

Denial of responsibility! NewsUpdate is an automatic aggregator around the global media. All the content are available free on Internet. We have just arranged it in one platform for educational purpose only. In each content, the hyperlink to the primary source is specified. All trademarks belong to their rightful owners, all materials to their authors. If you are the owner of the content and do not want us to publish your materials on our website, please contact us by email – [email protected]. The content will be deleted within 24 hours.
Australianbest sports newskeysMadisonnews update sportsnewsupdateOpenpowers

“Adam is evil”: SkyDoesMinecraft gets berated online as enraged fans continue to react