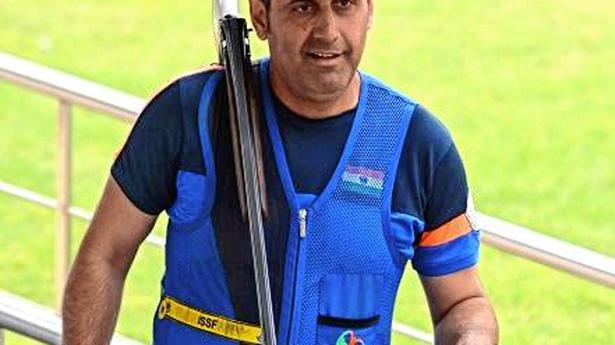 Mairaj delighted to be training with Ennio

It is the final stretch of preparation for the Tokyo Games despite all the chaos due to the pandemic. Mairaj Ahmad Khan is happy to be training with coach Ennio Falco, the 1996 Atlanta Olympics gold medallist, at his range in Capua, Italy.

“It was smooth travel. I reached here last week, flying through Paris and Rome. I am delighted to be training with Ennio after about two years,” said the 45-year-old Mairaj, who had missed the skeet final of the 2016 Rio Olympics in a shoot-off.

Having lost his father recently, Mairaj faced a tough time, but took things in his stride.

“I have not lost any training. I am taking it as a good recovery break for the hectic training coming up from now till the Olympics. Ennio’s range in Capua is the base for me till the Olympics. I will go to Tokyo from here. Before that, I will take part in a few local competitions in Italy,” said Mairaj.

Mairaj had also trained for a week at the Dr. Karni Singh Range in Tughlakabad before boarding the flight to Rome. Being based in Europe could be the best thing at the moment, especially with a World Cup in Osijek, Croatia, scheduled just before the Games.

“We will decide next week about shooting in the World Cup after Ennio has a good look at what I need,” said Mairaj.

Going into the 2016 Olympics, Mairaj had shot brilliantly in the World Cup in Rio that year, with 122 in qualification and missed a gold in a shoot-off. After such a high, in the run-up to the Games, it was not easy to maintain that intensity during the Olympics. Interestingly, Marcus Svensson of Sweden who beat Mairaj to the gold in the Rio World Cup, went on to bag the silver in the Rio Olympics.

Mairaj is glad the National federation and Sports Authority of India (SAI) made all arrangements for him in a professional manner.

With trainer Jitender Arya to assist him in physical conditioning, Mairaj is confident of preparing well and making an impact at the Tokyo Olympics.

Denial of responsibility! NewsUpdate is an automatic aggregator around the global media. All the content are available free on Internet. We have just arranged it in one platform for educational purpose only. In each content, the hyperlink to the primary source is specified. All trademarks belong to their rightful owners, all materials to their authors. If you are the owner of the content and do not want us to publish your materials on our website, please contact us by email – [email protected]. The content will be deleted within 24 hours.
best sports newsCoachdelightedEnnioennio falcoMairajMairaj Ahmad Khannews update sports