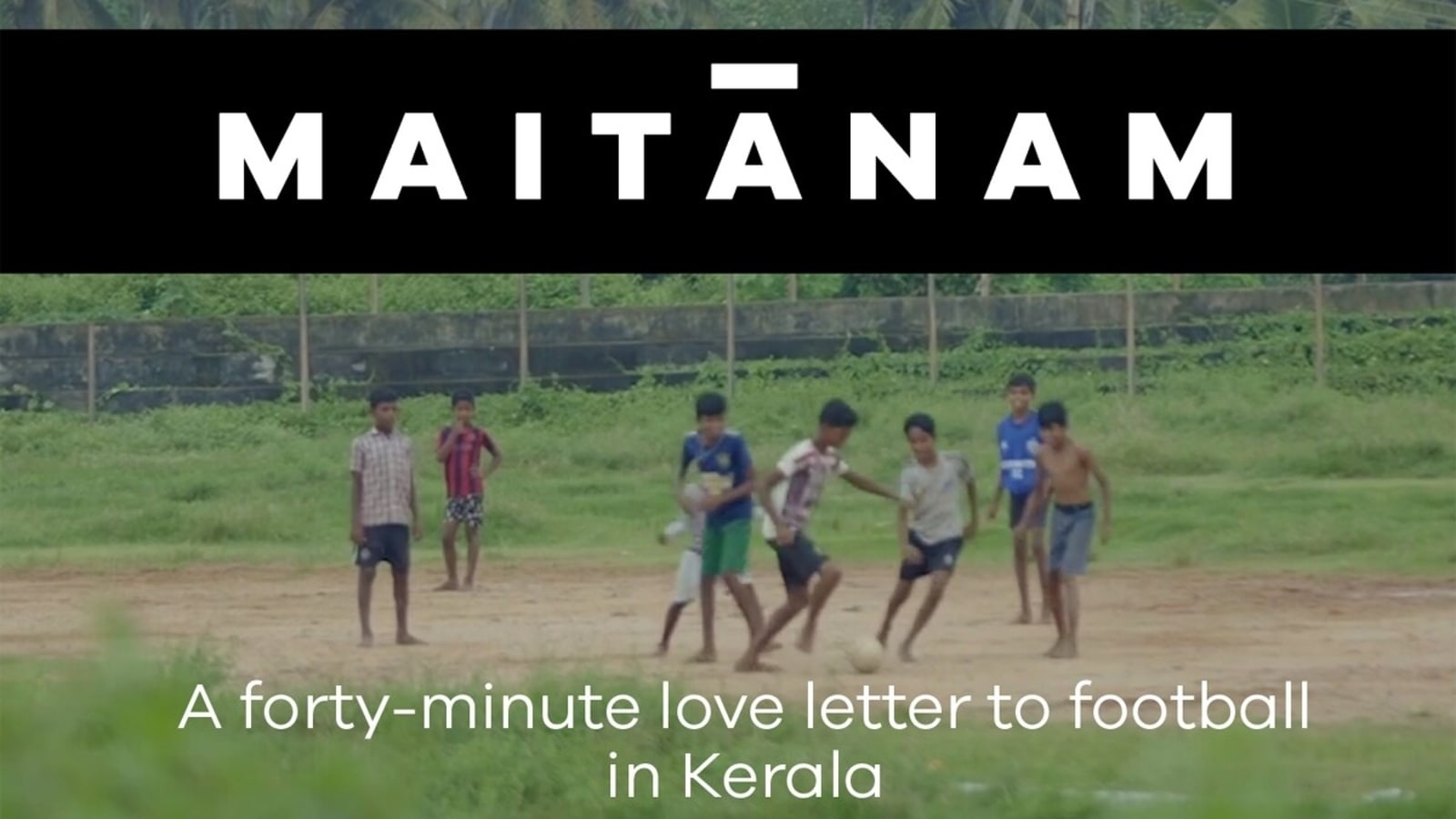 ‘Maitanam’ is a toe dip into Kerala’s passion for football

This narrative on one of the most passionate football territories in the world is shorter than one half of a match. “Maitanam” (Malayalam for playground), the documentary by Fifa and RISE Worldwide that attempts to showcase capture Kerala’s bond with the beautiful game is a mere toe dip because it is so difficult to capture the heartbeat of football fans or those dreaming to turn their passion into profession.

The documentary tells six inspirational stories to project how football is a way of life. There is that coastal ‘Santosh Trophy village’ south of capital Thiruvananthapuram where every youngster wants to emulate his neighbour who has played for the state in the national championship. Be it playing football on beach barefoot along the length of the state, or the sevens version that is the soul of the game in Kerala, especially in the north, they all find mention.

The ‘manjappada’ (yellow army fans) of ISL team Kerala Blasters or the 30,000 who trooped into a stadium in the middle of nowhere to watch Kerala beat Bengal in the Santosh Trophy final in Manjeri (in the northern district of Malappuram) is in the here and now. If these celebrations capture the fans’ heartbeat, wait for a few more months.

Massive celebrations, and fights to prove a point, will all start closer to the 2022 Fifa World Cup in Qatar. Argentine fans chasing Brazilian supporters will be regular fare – the narrator of the documentary explains that Kerala’s devotion to these two teams is because their players live the dream of influencing games with individual skill and flair.

Now, on why nostalgia adds plenty to the mind’s eye as the documentary rolls on.

Growing up in Kerala in the 1970s meant listening to seniors talk proudly of their playing trip from south to north for sevens football, how fans bought them clothes to appreciate their good performances and how organisers ensured winning resulted in some winnings. And watching Thomas Sebastian, an India winger in the 1980s and a sevens hero from Thiruvananthapuram, kick and run around the defender to show off his speed and stamina for the now-defunct Titanium team.

This week’s Santosh Trophy final reminded one of the 1993 final at Kochi’s Maharaja’s ground. The capacity, including the temporary galleries, was around 25,000 but the rough estimate for the final between Kerala and Maharashtra was almost double that figure. Kerala had not won the title for 20 years and the state’s home minister didn’t mind sharing a modest steel chair with a working journalist.

Safety concerns could not have halted the game. The crowd though would have put ball boys at the highest club games to shame – they promptly moved aside for corners by both teams. A Kerala win meant celebrations could continue on the streets.

Rufus d’Souza, the venerable coach at Fort Kochi’s Parade Ground for decades, talks in the documentary how being drenched by monsoon rain never made him skip a day’s training of the youngsters. The venue itself is steeped in history. The church overlooking the ground was built by the Portuguese in 1503 and explorer Vasco da Gama was buried there in 1524 before his body was taken to Portugal. The Dutch, the English and then the Church of South India took over, explains the Kerala tourism website.

For those more musically inclined, the ground where D’Souza trains is barely a stone’s throw from the family home of legendary singer Yesudas.

Kerala is enjoying a modest upswing among its players and teams. Sahal Abdul Samad and Ashique Kuruniyan have broken through to the India team, Gokulam Kerala FC won the 2020-21 I-League title and lead the standings this time. And Gokulam Kerala’s women’s team became the first Indian club to feature in the AFC Women’s Club Championship.

The documentary on the new streaming platform Fifa+ attempts to strike the right notes but falls short when it comes to getting the voice of Kerala’s most famous football sons. Neither IM Vijayan nor CV Pappachan – both no less stalwarts in the sevens game – get a word in. The story of football promotion by Kerala’s universities – the college and varsity teams are hugely popular – too is not told and the success of Kerala Police in the 1980s and 1990s glossed over.

May be this football genie can’t really be bottled.

Denial of responsibility! NewsUpdate is an automatic aggregator around the global media. All the content are available free on Internet. We have just arranged it in one platform for educational purpose only. In each content, the hyperlink to the primary source is specified. All trademarks belong to their rightful owners, all materials to their authors. If you are the owner of the content and do not want us to publish your materials on our website, please contact us by email – [email protected]. The content will be deleted within 24 hours.
best sports newsDipFootballKerala footballKeralasMaitanamMaitanam documentaryMaitanam review

OnePlus 10R 5G and the gaming prowess it has