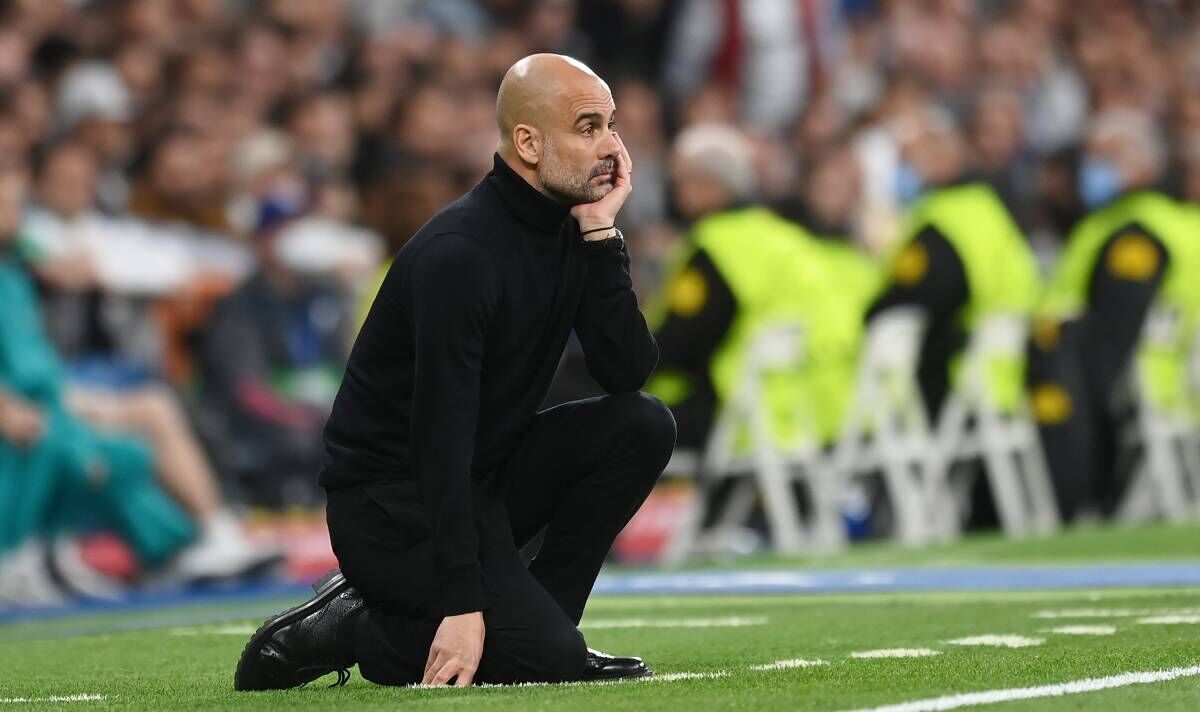 Manchester City have been sent crashing out of the Champions League after being seconds away from the final before Rodrygo scored twice in the dying seconds of the match to take the game to extra-time. Karim Benzema scored the winner with a typically cool penalty in extra-time as Pep Guardiola falters in his quest to lift the European trophy for the first time for the Etihad outfit.

City have been sent crashing out of the Champions League in the most dramatic of circumstances after Rodrygo’s late double sent the match to extra-time. Riyad Mahrez had scored with 15 minutes to go which looked to have ended any hopes of a comeback but this is Real Madrid – and this is how they operate.

Karim Benzema then scored a penalty just moments into extra-time to force Pep Guardiola into going for broke. But the Catalan coach was shellshocked in a frenetic Bernabeu while his counterpart, Carlo Ancelotti, contained himself in the only way the Italian knows.

But it means Liverpool will have the chance at redemption after falling at the last hurdle in the Champions League final of 2019 where they were beaten by Real Madrid. But what did we learn after Wednesday night’s performance?

Real Madrid are made for moments

City had been unperturbed for 89 minutes where Ederson did not even face a single shot on target. But you simply do not write off Real Madrid. Ever. Even if there are literal seconds left on the clock.

Real might not have been even that good on the night but they are a club built on moments and that is exactly how the Champions League is won. They live in a constant state of drama that even Hollywood would fail to keep up with.

In the first leg, Guardiola was without Kyle Walker and Joao Cancelo with John Stones at right-back and Oleksandr Zinchenko at left-back. The difference is startling in a City side, where both positions are absolute crucial.

Walker’s lung-busting recovery runs were vital in nullifying the tricky Vinicius Jr while Cancelo is basically another playmaker in midfield the way he plays. No offence to Stones and Zinchenko, who are both class players in their own right, but at this stage of the Champions League – you need your main men.

It was no shock to see that City’s defence fell apart when Walker came off but there was nothing Guardiola could have done with the Englishman forced off through injury.

There were some eyebrows raised before the game started when it emerged that Raheem Sterling was not in the starting line-up and represents a small fall from grace for the Englishman, who did not start the first leg either.

Riyad Mahrez, Phil Foden and Gabriel Jesus were City’s preferred trio up top while Sterling has been linked with a move to Real Madrid in the past. While he came on for extra-time, the former Liverpool ace was largely ineffective and will be gutted not to get the chance to show the Bernabeu what he is made of.

Do not rule out a move away this summer ahead of Erling Haaland’s potential arrival at the Etihad.

The Spanish press billed this clash as a match-up between two of the top talents in the world right now in Vinicius Jr and Foden. However there was only one true winner here with the City star having a difficult eve.

The England international was sensational in the first-leg and truly announced himself as one of the best in the sport right now but Vinicius Jr might have reclaimed that crown, despite failing to get on the scoresheet himself.

Nevertheless, these are two players with brilliant futures ahead of them and more tantalising ties to come.

While Guardiola looked to rip off the heads of everyone within a five-metre radius, Ancelotti was the embodiment of ice in a margarita. Even on a night where football reached its most fever-pitch, its most dramatic, the sublime, the mad, the simply outrageous, the Real Madrid manager looked like he was waiting for a bus on the touchline.

There is talk that Real president Florentino Perez wants to bin Ancelotti off at the end of the season but that is simply baffling. There is literally no one better placed on this planet to manage this Madrid team.

Denial of responsibility! NewsUpdate is an automatic aggregator around the global media. All the content are available free on Internet. We have just arranged it in one platform for educational purpose only. In each content, the hyperlink to the primary source is specified. All trademarks belong to their rightful owners, all materials to their authors. If you are the owner of the content and do not want us to publish your materials on our website, please contact us by email – [email protected]. The content will be deleted within 24 hours.
Bernabeubest sports newscapitulationCitydramalateLearnedlose

Evil Dead: The Game will not arrive on Nintendo Switch next week

Why Streaming Services Are Driving People Back To Pirating