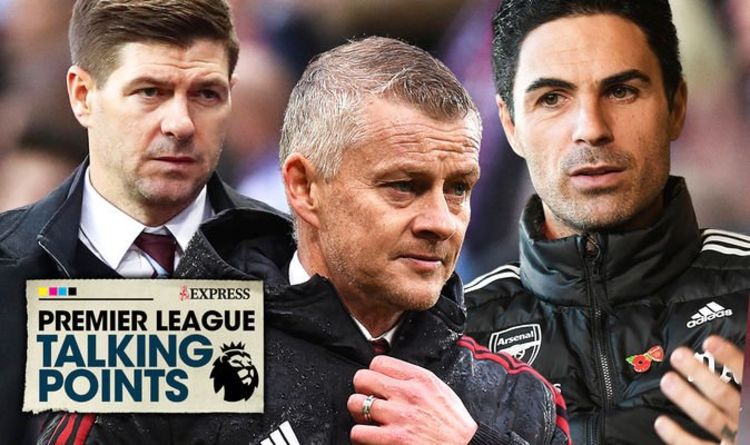 This weekend has seen the three ages of management. Manchester United finally sacked Ole Gunnar Solskjaer but it is a lack of direction from the very top of the club which has sent it spiralling down the plughole. Arsenal continue to trust a very long drawn-out process while Steven Gerrard began to build a brand new Premier League reputation for himself. Express Sport’s Matthew Dunn reviews the weekend’s action.

TIME TO THROW THE BOARD OUT WITH THE BATHWATER

When he said Edward Woodward’s name sounded “like a fart in a bathtub”, Sir Laurence Olivier was referring to the Equalizer actor, not the Manchester United vice-chairman.

But it might just explain the stench at United right now.

To appoint a caretaker to replace the original caretaker until an interim can be found stinks of the lack of decision-making that has destroyed any Sir Alex Ferguson legacy.

What the Glazers need to be looking at is finding a replacement for Woodward replacement Richard Arnold because the club seem to be dithering along the same PWC-accountant led path to indifference since their more successful predecessor David Gill left.

Then maybe that person will be the one finally to choose a new manager.

SALAH AND CO AN EYEFUL FOR ARTETA

The only thing Arsenal fans should be processing right now is that there is no progress – as Liverpool showed on Saturday evening.

Bright sparks Emile Smith Rowe and Bukayo Saka are no more than green shoots and pretty much everything wilted when faced by one of the teams Arsenal are supposed to be benchmarking against.

While Rome was not built in a day, the Eiffel Tower was constructed in less time than Arteta has had to put together this rather-too-shaky edifice.

Under Nuno Espirito Santo, Tottenham were going nowhere. Now, under Antonio Conte, they are definitely up-and-running. It really is that simple.

Seven games into the season, Spurs were the only team to have run less than 100km between them per match.

Yet on Sunday, their 112km eclipsed fitness-freaks Leeds for only the second time since their return to the top flight.

That is still not as much energy as Conte himself burned on the touchline but it is a reminder of how simple a game football still remains.

It took a long while to come but Steven Gerrard eventually got his new manager’s bounce against Brighton on Saturday.

But now comes a midfielder-manager clash of the ages.

Vintage Vieira against Supreme Stevie G was one of the battles of the season 16 years ago. Next week, two men with a very fixed single-mindedness on reaching the heights from the dugout.

It is early days yet, but I think the Premier League will be witnessing clashes between them for many years to come.

THREE IS THE MAGIC NUMBER

It is uncanny how many times Chelsea get to three then stop – points in the bag thank you very much.

“Running amok” just does not feel very Thomas Tuchel, and sure enough only Norwich have succumbed to any further humiliation in the Premier League since an early 4-1 win over Crystal Palace.

With Manchester City and Liverpool racking up scores rather more flamboyantly, will be interesting to see who has the staying power to last the distance over what is already looking like an intriguing three-horse race.

Denial of responsibility! NewsUpdate is an automatic aggregator around the global media. All the content are available free on Internet. We have just arranged it in one platform for educational purpose only. In each content, the hyperlink to the primary source is specified. All trademarks belong to their rightful owners, all materials to their authors. If you are the owner of the content and do not want us to publish your materials on our website, please contact us by email – [email protected]. The content will be deleted within 24 hours.
Arsenalsbattlesbest sports newsboardGerrardsissueMannews update sports

Save 15% on our favorite SSD for most people

“When you lose the fight, you don’t check the…