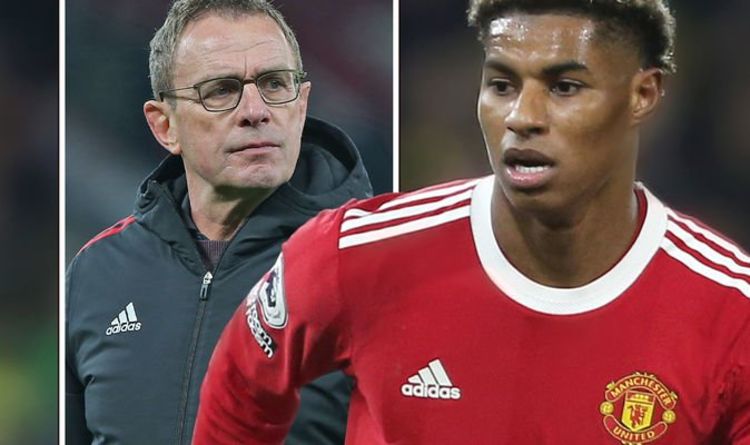 Manchester United chiefs are growing increasingly concerned with Marcus Rashford’s off-field commitments despite planning talks with the England ace over a new contract in the summer, according to reports. The 24-year-old has struggled to display his best form on a consistent basis for the Red Devils over the last few seasons, with his role in the squad diminishing as a result.

Rashford has only started seven Premier League matches since the beginning of the campaign, registering two goals and an assist in the process.

He is now equally known for his charity work as he is for his football, having emerged as a leading campaigner against racism and child hunger in recent years.

The United forward gained plenty of praise after forcing Boris Johnson into a U-turn over free school meals during the pandemic before he was awarded an MBE back in October.

However, it seems as though United bosses are far from happy with Rashford’s extracurricular commitments.

Senior figures at the club spoke to the Red Devils academy graduate earlier this season to voice their concerns over whether his charity efforts were having a detrimental effect on his game, according to the Daily Star.

It is said that United also believe that Rashford’s decision to sign with leading entertainment company Roc Nation may prove to be ill-judged if his form does not improve over the coming months.

He reportedly gave assurances that he would remain fully committed to the club but expressed a desire to continue helping those less fortunate than himself in the form of his off-field involvements.

United still believe that Rashford can establish himself as a key man at Old Trafford in spite of his other commitments and will enter talks with his representatives over a new and improved contract in the summer.

His current deal is set to expire in 2023, meaning that he will be able to leave the club as a free agent at the end of next season as things stand.

However, the Red Devils are determined to avoid such a possibility by tying him down to fresh terms before the start of the campaign.

It remains to be seen whether Rashford will eventually pen a new deal with United in order to extend his career-long stay at the club he joined at the age of seven.

Former United defender Paul Parker recently urged the forward to scale back his charity work and place a greater emphasis on performing for his team on the pitch, imploring him to forget the idea of a secondary career in politics.

“Manchester United are playing a system, which is very narrow, for which they haven’t really got the personnel to play,” said Parker last month.

“Too many wide players are being asked to tuck in and start inside and then go outside. Look at the likes of [Jadon] Sancho, [Mason] Greenwood, and Rashford.

“If he can wake up and remember he’s a footballer rather than thinking he’s a politician, then it might work.”

Rashford has already registered close to 300 professional appearances for United since bursting onto the scene back in 2016, chipping in with 91 goals and 57 assists in the process.

Denial of responsibility! NewsUpdate is an automatic aggregator around the global media. All the content are available free on Internet. We have just arranged it in one platform for educational purpose only. In each content, the hyperlink to the primary source is specified. All trademarks belong to their rightful owners, all materials to their authors. If you are the owner of the content and do not want us to publish your materials on our website, please contact us by email – [email protected]. The content will be deleted within 24 hours.
acebeliefbest sports newsDevilsenglandHoldManMarcus

iPhone 14 prices might end up being higher than anyone expected

Walmart Is Restocking The PS5 And Xbox Series X This Week