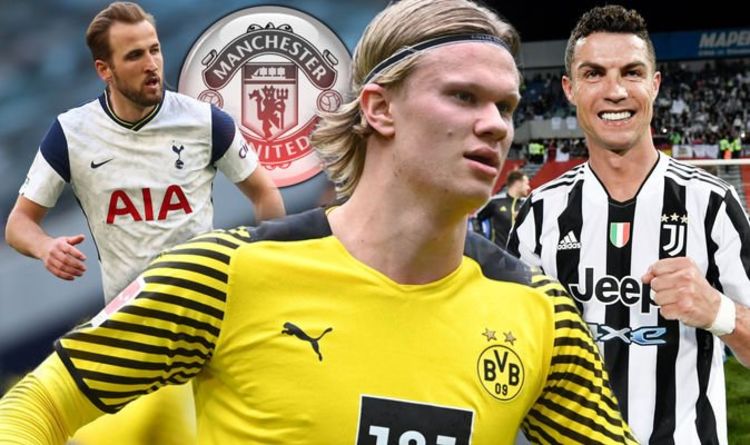 You’d do well to find a Manchester United transfer round-up not centered on something about Tottenham striker Harry Kane’s future right now. Unsurprisingly, the want-away Spurs talisman’s next move is a hot topic at present, with United, Manchester City and Chelsea all feasible destinations.

United’s stance on signing Kane, with their interest obvious but the exact chances of any bid less clear, promises to have huge repercussions on their plans for the rest of the window.

Opt to go big for the England captain, who will cost them at least £150million in transfer fees before even considering wages, and United are unlikely to be able to sign an elite-level centre-back as well for example.

The United hierarchy therefore have to ask themselves how important it is that they sign a world-class centre-forward, or whether they can afford to pass on Kane and potentially let him join City or Chelsea.

The 27-year-old Spurs frontman certainly seems determined to quit the north London outfit, and he wants to sit down and have an “honest conversation” with chairman Daniel Levy.

Cristiano Ronaldo is another potential high-profile acquisition as an alternative to Kane with Juventus’ Champions League qualification uncertain and the Portuguese still going strong at 36.

Serie A’s top scorer with 29 goals, United are thought to be keeping an eye on Ronaldo’s situation in Turin amid the possibility of a blockbuster return should Juve miss out on the top four in Italy.

Yet while speculation swirls particularly over Kane and now Ronaldo too, there is one man whose future was previously the talk of the town who has been consigned to the background – Dortmund’s Erling Braut Haaland.

When Mino Raiola and the player’s father Alf-Inge Haaland were holding meetings about the player’s future with Real Madrid and Barcelona, everyone was talking about him, but now discussions over the big Norwegian’s future are no longer as prominent.

Yet the 20-year-old has continued to excel for Dortmund nonetheless and on Saturday scored a brace to end the season on 27 Bundesliga goals, only outscored by Eintracht Frankfurt’s Andre Silva (28) and Bayern Munich’s Robert Lewandowski (41) in Germany’s top tier.

Across all competitions, Haaland concluded the campaign with 41 goals and 12 assists in as many appearances, despite the fact he does not even turn 21 years old until July. He now has a summer off with his country having failed to qualify for the Euros.

The Norway international’s overall record across his spells with Molde, Red Bull Salzburg and Dortmund – whom he left to join in January 2020 for £17m – reads: 136 games, 106 goals, 28 assists.

In the right attack at the right team, Haaland is a Ballon d’Or winner primed to score 500-plus goals at club level. That’s why Real Madrid, Barcelona, Man United, Man City and Chelsea all like him.

Kane and Ronaldo might be the more attainable signings in the immediate summer but Haaland is the most long-term of the trio, and the one best equipped to make United title challengers not just next season or in the next three or four, but the next 10.

The towering Leeds-born frontman looks ready to rival players such as Paris Saint-Germain’s Kylian Mbappe and Sancho for the tag of world’s best forward in the post-Lionel Messi and Ronaldo era.

And in Solskjaer, he would be working with a man he already knows well having played under his countryman at Molde. The United boss has repeatedly taken the change to laud his compatriot’s talents in the eye of the public in recent months.

While passing on Kane is risky and United fans might love a Ronaldo reunion, there is plenty of sense behind signing multiple players to improve the team such as Sancho and Varane this summer and then adding the final piece in a Haaland next year.

Such deals wouldn’t be easy to pull off given the competition but while others are focused on the likes of Kane, perhaps United would be wise to keep conversations with Haaland’s representatives going.

Getting the Dortmund striker to Old Trafford would mark a glorious start for United’s new-look recruitment staff, and could lead to even more glory on the pitch.

Denial of responsibility! NewsUpdate is an automatic aggregator around the global media. All the content are available free on Internet. We have just arranged it in one platform for educational purpose only. In each content, the hyperlink to the primary source is specified. All trademarks belong to their rightful owners, all materials to their authors. If you are the owner of the content and do not want us to publish your materials on our website, please contact us by email – [email protected]. The content will be deleted within 24 hours.
best sports newsCristianoErlingHaalandHarryKaneMannews update sports