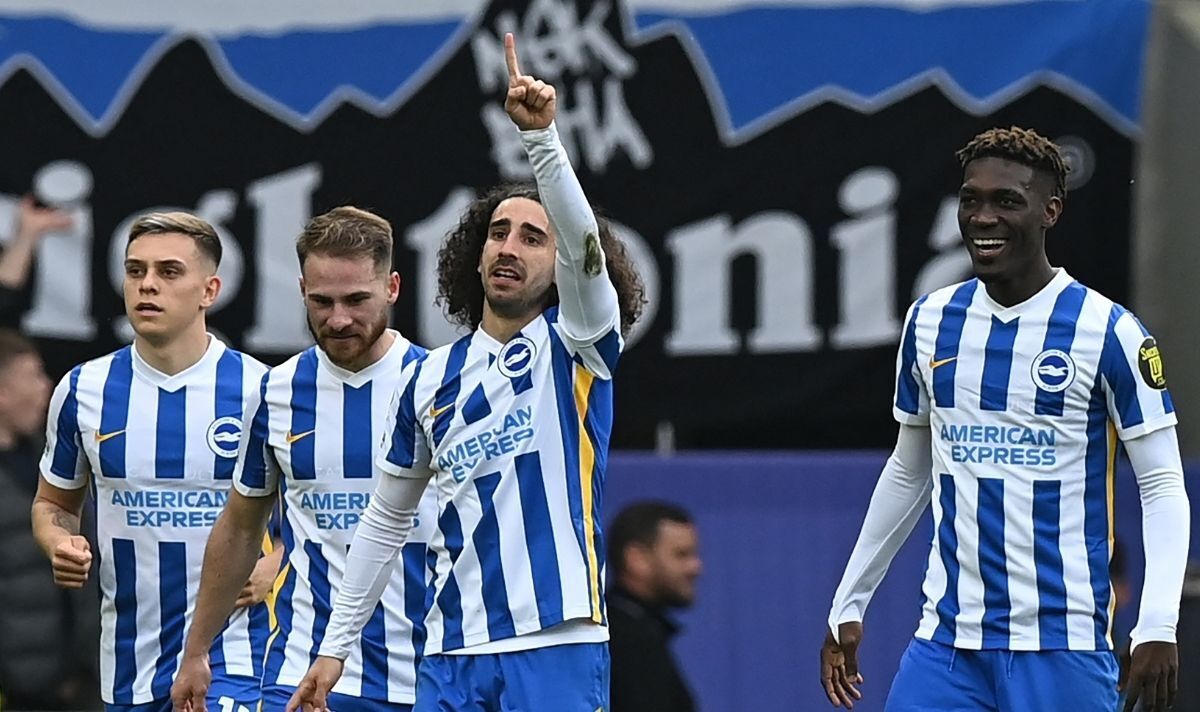 Man Utd would be lucky to have some of Brighton’s brilliant stars (Image: GETTY)

Scrap the trophies and history and Brighton are just about everything Manchester United are aspiring to be. The Seagulls are now boasting one of the most effective and efficient scouting networks in all of world football and the club’s lead negotiators certainly know how to navigate talks to secure a successful bargain. Couple that with an eye-catching style of play, masterminded by an innovative coach who knits it all together and you’re certainly onto a winner.

Brighton may have nothing other than pride to show for their most-successful Premier League campaign to date but they are a club making huge strides – both on and off the field.

That was evident on Saturday evening when Graham Potter’s side cut United to shreds at the Amex, dishing out a resounding 4-0 romping of the record 13-time champions.

The gulf in class and quality between the two sides was frightening and highly likely to trigger yet another internal inquest at United ahead of the arrival of Erik ten Hag this summer.

He will be handed a significant transfer budget to rebrand and redesign his new-look Red Devils side – virtually from scratch – upon arrival from Ajax but throwing money at it hasn’t always been the solution for the club, as recent history proves.

Leandro Trossard and Yves Bissouma have been brilliant for Brighton (Image: GETTY)

Because if that was the case, the arrivals of Cristiano Ronaldo, Raphael Varane and Jadon Sancho looked certain to help United eat up the ground on Manchester City and Liverpool – something that just has not happened. United have seemingly regressed.

But if there were further lessons to be learned from the embarrassing reality check on the South Coast, it’s that United’s recruitment team can certainly take note of the immaculate work being carried out upstairs by Brighton.

United were left red-faced in the opening exchanges when Ecuadorian international Moises Caicedo netted a sweetly-struck opener for Brighton. He was a player the club strongly considered signing in January 2021 before opting against the move, allowing the Seagulls to pounce. There was an undeniable irony to the goal.

If truth be told, there would quite frankly be no shame in looking to sign three of the Seagulls’ stars who were at the centre of the sobering demolition job…

Both Yves Bissouma and Leandro Trossard are now approaching the final 12 months of their current contracts at the Amex and talks over an extension appear to be dead in the water.

Bissouma is the master of interceptions, ball retention and breaking up play, enabling the forwards to do the damage in attack. He will not be short of offers both this summer and in 2023, when his contract expires.

The Mali international has proven himself time and time again over the past few seasons as one of the finest and most unsung players outside of the so-called Big Six.

United are craving a midfielder of his mould, who can help control the game from deep, particularly with Nemanja Matic set to depart in due course. Fred has improved but Scott McTominay has seemingly reached his ceiling at the club.

Trossard is also criminally under-appreciated and his knack of scoring goals against the top clubs shows he’s ready to make the step up should somebody be willing to take a chance on him.

Yes, the Belgian would not be a regular starter for United but with Jesse Lingard and Juan Mata off, he’s certainly more than capable of plugging a gap in their squad.

The winger, who has won 15 caps for Belgium, is hungry and has made huge, evident improvements under Potter. His attitude is exactly what United require, as opposed to some of the prima donnas that have arrived at Old Trafford for big bucks over the years and failed to deliver.

Much like the Diogo Jota and Sadio Manes of this world, there is a chance he could elevate his game to new heights in different surroundings – although admittedly, his numbers are not as good as the Liverpool duo’s during their time with Wolves and Southampton, respectively.

With both Bissouma and Trossard entering the final year of their contracts, Brighton will be placed under pressure to consider offers this summer to avoid potentially losing them on free transfers at the end of the 2022/23 campaign.

Marc Cucurella has been sensational for Brighton this season (Image: GETTY)

Furthermore, Marc Cucurella, who scored and assisted in an enthralling display from left-back, would be a signing for United supporters to get excited about.

The all-action, relentless Spanish international has won Brighton’s Player of the Season award in his debut season and it won’t be long before other clubs come calling.

Luke Shaw appears to have gone stale following his sensational showing at Euro 2020, while Alex Telles has proved prone to an error in his recent absence.

United are said to be open to adding cover at full-back and Cucurella would be the perfect starting point.

It would be telling of United’s current desperation if they were to raid Brighton of their most-prized assets following last weekend’s humbling, but these players could help the club draw a line in the sand when it comes to their awful track record with recruitment.

Denial of responsibility! NewsUpdate is an automatic aggregator around the global media. All the content are available free on Internet. We have just arranged it in one platform for educational purpose only. In each content, the hyperlink to the primary source is specified. All trademarks belong to their rightful owners, all materials to their authors. If you are the owner of the content and do not want us to publish your materials on our website, please contact us by email – [email protected]. The content will be deleted within 24 hours.
Addbest sports newsBrightonErikHagHorrorMannews update sports

Best VPN Deals – Find a cheap VPN for your Mac, iPhone or iPad