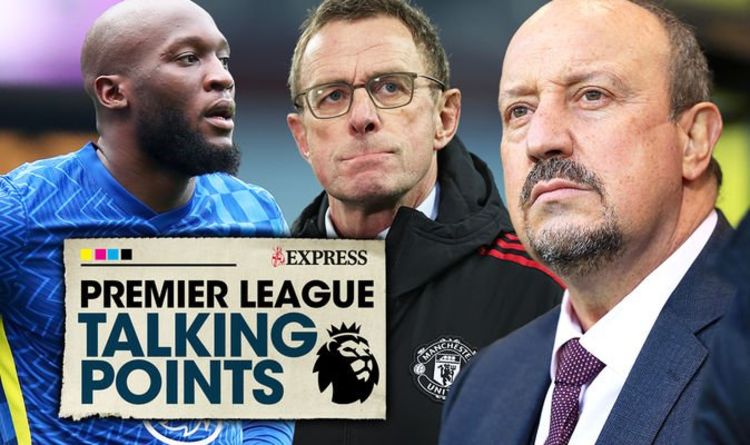 Ralf Rangnick’s not-so-super subs, troubled waters still at the Bridge and all the while Wayne Rooney must be patient while Rafa Benitez seeks to land his final mission for glory.

Finding the tactics to change a game is supposed to be the final lesson of manager school,

Yet relative newbie Steven Gerrard showed he was far more adept at it than his much more senior opposite number on Saturday, Ralf Rangnick.

Widening play was enough to bamboozle the United defence as Villa recovered from 2-0 down to pick up a well-deserved point.

It was that sort of shortcoming that ultimately cost Ole Gunnar Solskjaer his job – United now seem to have a manager better able to pull off one of his best players on the night, Anthony Elanga, than he is to pull off a tactical masterstroke.

The last thing United want, when they already have Cristiano Ronaldo’s ageing hips to contend with, is an ageing hipster to deal with.

Having insisted on an abject apology from Romelu Lukaku after his interview questioning his tactics, everything seemed to have calmed down behind the scenes at Chelsea.

Thomas Tuchel even had a little joke and some praise for his prodigal son after the first leg of the Carabao Cup semi-final against Spurs.

This weekend, though, Lukaku “had many ball losses”, showing at the same time the Chelsea manager had lost none of his by laying into his star player yet again.

It seemed slightly unfair to pick on the Belgium international after the 1-0 defeat to Manchester City and Tuchel has to be careful not to alienate Lukaku.

He will need him on side if he is to hope to build in future the title challenge which died, for this season, at the weekend.

Wayne Rooney needs to avoid the vacant Everton job if he is ever to be taken seriously as a football manager.

If Everton were to turn to the former England captain it would be the same desperation that left West Ham in the hands of Trevor Brooking and Newcastle under the control of Alan Shearer.

Rooney is not ready for the Everton job and all the expectation and emotion it entails and must learn his trade as Steven Gerrard has done at Rangers before Aston Villa.

The time for a second emotional homecoming to Goodison will be when he has the tools to do a difficult job.

Rafa Benitez, meanwhile, having wrecked Everton is just one disastrous spell at Manchester United away from becoming Liverpool’s greatest ever manager and having a stand named after him.

Liverpool ended a month of Premier League mayhem in fine style against Brentford but the damage is already done.

Even with their first win since December 16 against Newcastle to celebrate, they remain 11 points adrift. Immediately after that Newcastle victory the gap was only a single point.

Defeat to Leicester, a draw with Spurs and another draw with Chelsea might not be too bad a return in a normal era.

But this is the era of ludicrous winning streaks – and Pep Guardiola’s side are streaking away without a glance over their shoulders.

The trip to the Etihad on April 9 might just be a week or two early to concede the title race and already Liverpool’s best chance for next season looks to be Pep Guardiola remaining good to his word and stepping down at City.

Performance of the weekend has to go to Leeds who put not just the jab into the fight against the current situation, but the uppercut and right hook as well.

Some clubs may try to manipulate the rules to take advantage of the Premier League’s fearful kowtowing to a disease which has threatened to close them down completely.

But having had Covid problems in the past, Leeds simply got on with it against West Ham despite missing nine senior players and having a 15-year-old on the bench.

It sent a clear message around the world – perhaps even to Melbourne. If you want to be a winner, instead of looking for dodgy loopholes, sometimes you just have to roll up your sleeve and get on with it.

Denial of responsibility! NewsUpdate is an automatic aggregator around the global media. All the content are available free on Internet. We have just arranged it in one platform for educational purpose only. In each content, the hyperlink to the primary source is specified. All trademarks belong to their rightful owners, all materials to their authors. If you are the owner of the content and do not want us to publish your materials on our website, please contact us by email – [email protected]. The content will be deleted within 24 hours.
Benitezbest sports newsFailloveLukakuMannews update sportsnewsupdate

Movies to look forward to in January, February & March 2022 – Smartprix

IPL 2022: How the dramatic final over of the RR innings…