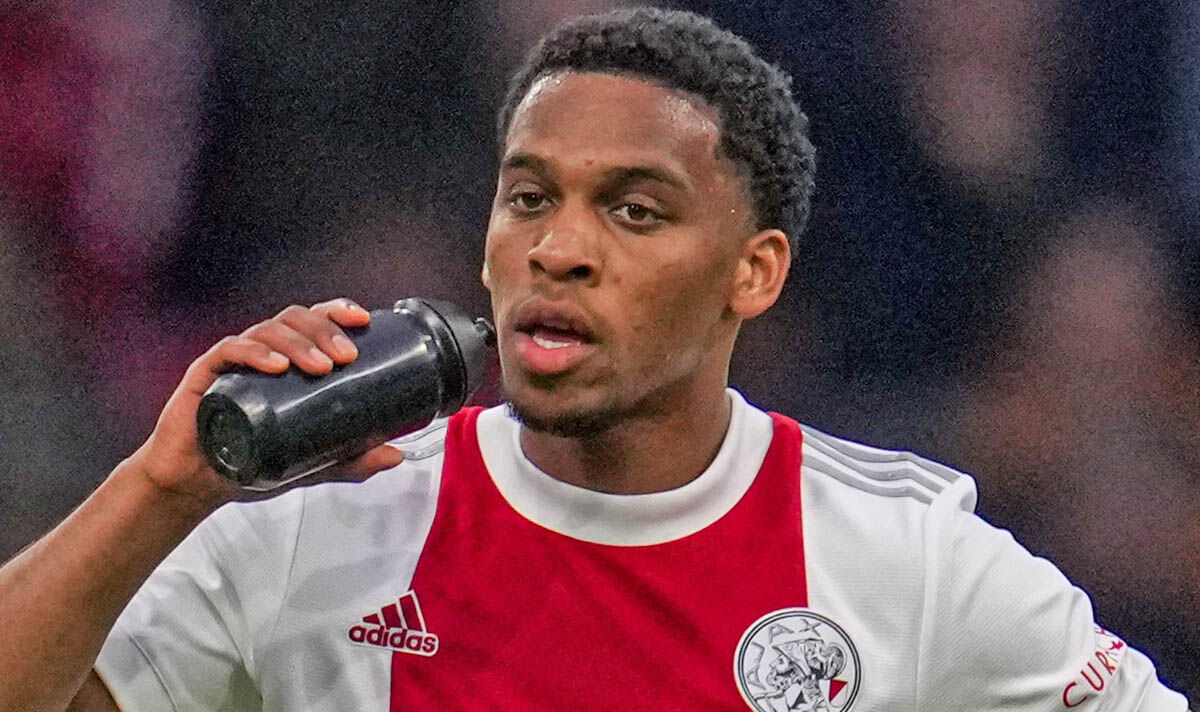 Manchester United will decide on signing a centre-back ‘soon’ after Jurrien Timber’s name was discussed in a meeting with Erik ten Hag, it has been claimed. The Red Devils want a new defender as they seek a better and brighter future at Old Trafford. And an Eredivisie raid may now be on the cards.

Raphael Varane was solid, if unspectacular, while the likes of Harry Maguire, Victor Lindelof and Eric Bailly all experienced chastening campaigns.

Now, according to Fabrizio Romano, United held a meeting days ago where Timber’s name was discussed.

And the transfer expert has now claimed the Red Devils will decide on a new centre-back ‘soon’ after the Netherlands international was again discussed in the past 24 hours.

“Timber’s name [alongside Pau Torres] was also mentioned in the first meeting between Man Utd and ten Hag, days ago.

Lindelof is likely to be used more sparingly, having blown hot and cold ever since his arrival from Benfica back in the summer transfer window of 2017.

And several players are primed to leave United behind.

The Red Devils want to get Phil Jones off their wage bill, 11 years after he arrived from Blackburn Rovers under Sir Alex Ferguson.

The England international has spent more time on the sidelines than on the pitch and was linked with Newcastle, among others, in the New Year.

Napoli are one of the teams interested in the Ivory Coast international, who has been at the club since 2016.

And Axel Tuanzebe, who spent last season on loan in Serie A, is also expected to be sold in order to raise funds.

United have signed two players from Ajax over the past decade.

Daley Blind touched down from the Eredivisie outfit in 2014, before returning four years later.

Meanwhile, when it comes to new signings, Dimitar Berbatov feels United must get their recruitment right to give Ten Hag every chance of being successful.

Asked if the 52-year-old needs time to adapt to life in England, he said: “Yes. I said when United appointed Ralf Rangnick — with his reputation and what he’s built — he’d still never managed a club of United’s stature and that was a challenge.

“We saw it was a challenge and now Ten Hag comes with a reputation for managing one of the biggest clubs in the world in Ajax.

“But now this is England, one of the biggest clubs, the challenge will be immense and I hope he’s ready for everything that lies ahead and I wish him luck.

“I hope that he can buy players that are smart and the right choices. He definitely needs to start with the defence, it has been too easy conceding goals, and this must be the starting point.

“I say don’t buy for the sake of buying. When you do that nothing happens; the fans and the club are disappointed and you end up loaning the player to another club.

“Be smart, make the right choices and sign the right players.”

Denial of responsibility! NewsUpdate is an automatic aggregator around the global media. All the content are available free on Internet. We have just arranged it in one platform for educational purpose only. In each content, the hyperlink to the primary source is specified. All trademarks belong to their rightful owners, all materials to their authors. If you are the owner of the content and do not want us to publish your materials on our website, please contact us by email – [email protected]. The content will be deleted within 24 hours.
best sports newsdecideErikHagheldJurrienManmeeting