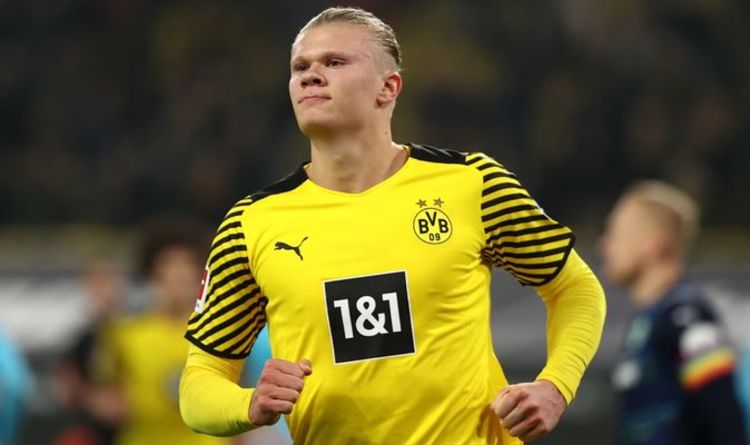 Rangnick was technical director at Red Bull when the 21-year-old moved to the franchise from Molde in 2019.

Haaland is hot property in European football having scored 76 goals in 75 matches for Dortmund since arriving in January 2020.

The continent’s best clubs all want to sign the Norwegian, who reportedly has a bargain £65million release clause become active in the summer.

Despite having not strongly competed for silverware for a while, United fancy their chances of winning the race to sign Haaland.

According to the Manchester Evening News, the club are ‘pushing’ for a transfer and will use Rangnick’s relationship with Alf-Inge Haaland to pursue a deal.

The potential arrival of the star forward could kick off an exciting time for the Red Devils. Express Sport picks out what a United team could look like with Haaland three other possible signings.

Spaniard De Gea might have thought his United career was over after missing the crucial penalty in the Europa League final defeat by Villarreal.

At the time, Dean Henderson was preferred by Ole Gunnar Solskjaer for Premier League matches and De Gea had seen little domestic action.

However, Henderson’s back injury in the summer allowed a route back into the team for the 31-year-old.

He has been one of the club’s best performers this season, keeping five clean sheets in 21 appearances. It is now Henderson who faces an uncertain future.

Interim boss Ralf Rangnick appears to prefer Diogo Dalot over Aaron Wan-Bissaka but United might sign a completely new right-back in the summer.

Norwich defender Aarons has proved himself as being capable of stepping up a level during his two Premier League stints with the Canaries. Their potential relegation might allow United to seal a bargain deal.

The Red Devils will hope that Varane will long be over the injury issues that have kept him out for much of this season. He could continue to develop his partnership with Harry Maguire.

That will leave Shaw and Alex Telles battling for the left-back spot.

United’s midfield could look entirely different next season. Paul Pogba and Jesse Lingard are out of contract and fresh terms do not seem to have been resolved.

That could allow United with an opportunity to revamp their options for the role.

Marseille starlet Kamara has been linked with the Old Trafford outfit. The 22-year-old is a deep-lying playmaker who is comfortable both in and out of possession.

And the Frenchman could be joined by Milinkovic-Savic. Corriere dello Sport claim that the Serbian is looking for a way out of Lazio and that United are interested.

Rangnick has preferred a 4-2-2-2 formation but it is unclear how a front four might look under a new manager, whether that be Erik Ten Hag, Mauricio Pochettino or another candidate.

Haaland would walk into the Red Devils’ starting 11 and who better to partner him than the experienced Ronaldo.

Bruno Fernandes would be the perfect supplier of assists to the prolific pair.

Sancho will battle the likes of Marcus Rashford, Anthony Martial and Anthony Elanga for the fourth and final attacking spot.

Denial of responsibility! NewsUpdate is an automatic aggregator around the global media. All the content are available free on Internet. We have just arranged it in one platform for educational purpose only. In each content, the hyperlink to the primary source is specified. All trademarks belong to their rightful owners, all materials to their authors. If you are the owner of the content and do not want us to publish your materials on our website, please contact us by email – [email protected]. The content will be deleted within 24 hours.
best sports newsblisteringErlingHaalandMannews update sportsnewsupdateSeason

Yearender: UFC pound-for-pound rankings and list of champions at end of 2021