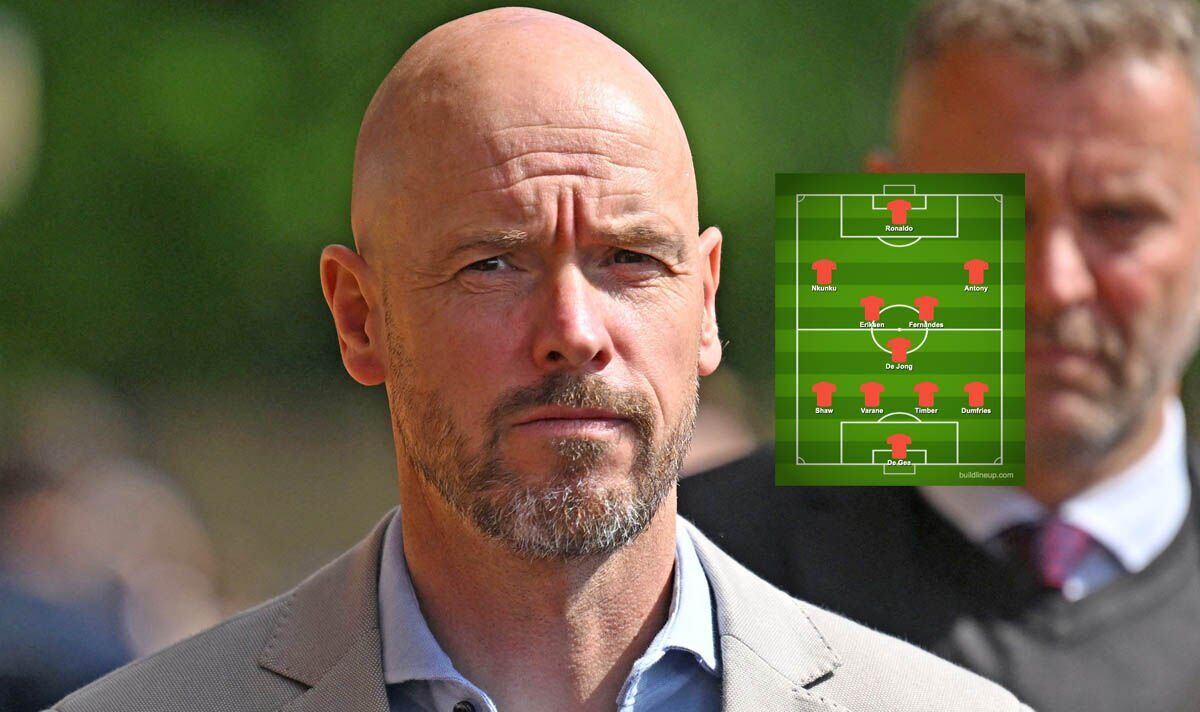 Manchester United’s first Premier League match under Erik ten Hag will be against Brighton after the fixtures were confirmed on Thursday. It promises to be a cracker at Old Trafford as the Dutchman seeks a winning start. So Express Sport will now take a look at how the Red Devils could line up for the match if they’re able to bring six fresh faces in this summer.

A year ago, David De Gea was under immense pressure.

Having sometimes fallen behind Dean Henderson in the pecking order under Ole Gunnar Solskjaer, and toiling in the Europa League final, the veteran needed to bounce back.

And De Gea did exactly that, with the Spain international a shining light amid a shambolic campaign under both Solskjaer and Ralf Rangnick.

He won’t be going anywhere this summer and is expected to be the club’s No 1 again.

Dean Henderson is likely to leave amid interest from Nottingham Forest, while Tom Heaton could end up joining the England shot-stopper out of the exit door.

So a midfield trio of Frenkie de Jong, Christian Eriksen and Bruno Fernandes would certainly excite the Old Trafford faithful.

De Jong is their top target, with the Barcelona star coming round to the idea of moving to the Premier League this summer having initially been wary.

And Eriksen is also being pursued after his short-term Brentford contract expired.

De Jong could operate the base of United’s midfield, with Eriksen and Bruno Fernandes then playing further ahead.

United have Jadon Sancho and Marcus Rashford as options for their attack.

But with Ten Hag looking to mould the club in his own image, it’s feasible the Red Devils will add two more forwards to provide competition for places.

Antony has flourished under the Dutchman at Ajax and could go on the right wing, amid claims United have already bid for the Brazil international.

Christopher Nkunku would then go on the left, though his signing does admittedly seem ambitious given RB Leipzig’s reluctance to sell.

And, up top, Cristiano Ronaldo. Who else?

Speaking recently, Avram Glazer insisted that United would ‘work hard’ to give Ten Hag the best possible chance of succeeding at Old Trafford.

The controversial co-owner of the club said: “It is a disappointing season.

“It’s a disappointing season for everyone and we’re going to work hard to make next season a better season.”

And he added: “We’ve always spent the money necessary to buy new players.”

The Glazers have, in fairness, splurged over £1billion on fresh faces in the years since Sir Alex Ferguson left.

But United need to make sure any new recruits fit the profile Ten Hag wants if he’s to succeed where the likes of Solskjaer, Jose Mourinho, Louis van Gaal and David Moyes have all failed.

Denial of responsibility! NewsUpdate is an automatic aggregator around the global media. All the content are available free on Internet. We have just arranged it in one platform for educational purpose only. In each content, the hyperlink to the primary source is specified. All trademarks belong to their rightful owners, all materials to their authors. If you are the owner of the content and do not want us to publish your materials on our website, please contact us by email – [email protected]. The content will be deleted within 24 hours.
best sports newsBrightonfixtureManNewlooknews update sportsnewsupdateOpening