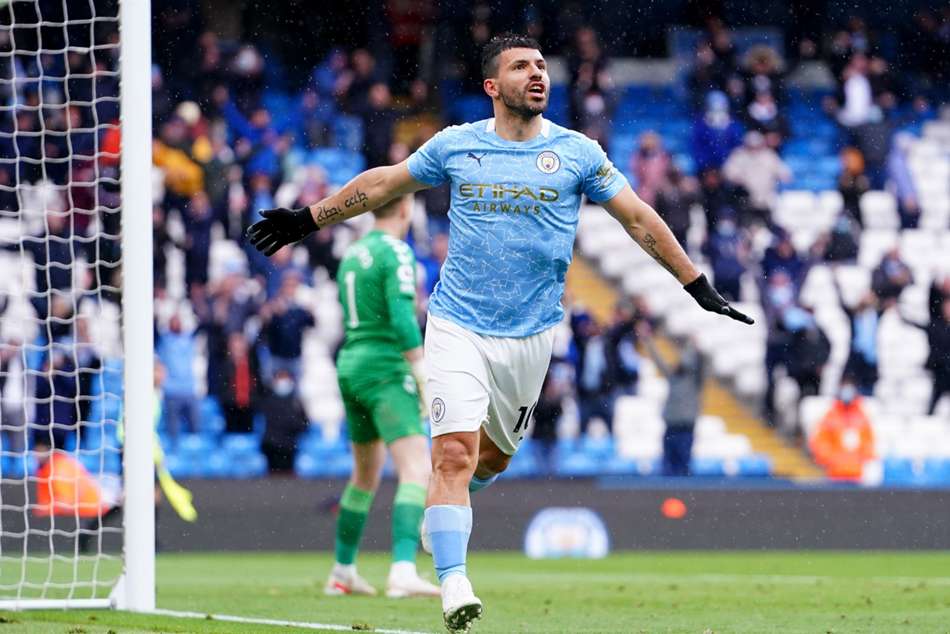 Aguero, already the top-scoring overseas player in Premier League history, entered the fray at 3-0 in the 65th minute and converted with the outside of his boot when Fernandinho snaffled possession six minutes later.

He then headed home a superb delivery from the veteran Brazilian for his 184th top-flight City goal, usurping Wayne Rooney’s 183 for Manchester United as the Premier League’s largest one-club haul.

City’s all-time record goalscorer has endured an injury-ravaged season and was only fit enough for a place on the bench, leaving Pep Guardiola’s champions to again demonstrate how expertly they have shared the goals around in his absence.

Kevin De Bruyne’s 10th of the season in the 11th minute made him the seventh City player into double figures this term, with Gabriel Jesus scoring his 14th shortly afterwards and Phil Foden his 16th after half-time.

Six days out from their Champions League final showdown with Chelsea, City were not always at their best defensively and Golden Glove winner Ederson needed a 36th-minute penalty save from Gylfi Sigurdsson’s effort to preserve a 19th league clean sheet of the season.

2 – Sergio Agüero has scored two goals as a substitute for Manchester City for only the second time, the first being his club debut against Swansea City in August 2011. Poetic. pic.twitter.com/XoxEStEetq

There was little Jordan Pickford could do little when De Bruyne got Riyad Mahrez’s pass out of his feet to thump home emphatically from 20 yards.

Jesus quickly got in on the act himself, with De Bruyne back in his customary role of provider, leaving the Brazil international to engineer space in the box and score his eighth Premier League goal against the Toffees.

After a week when he was voted FWA Football of the Year, Ruben Dias was unusually lax at the heart of the City defence and brought down Richarlison in the box, only for Ederson to spring right and keep out Sigurdsson’s kick.

Mahrez clattered the bar from distance before the interval and Foden extended City’s advantage further six minutes after the resumption, slotting in right-footed from Raheem Sterling’s pass.

A bedraggled Everton then proved to be very accommodating opponents on Aguero’s victory lap, with only a superb Pickford save when he met an 81st-minute De Bruyne corner preventing a fairy tale hat-trick.

Denial of responsibility! NewsUpdate is an automatic aggregator around the global media. All the content are available free on Internet. We have just arranged it in one platform for educational purpose only. In each content, the hyperlink to the primary source is specified. All trademarks belong to their rightful owners, all materials to their authors. If you are the owner of the content and do not want us to publish your materials on our website, please contact us by email – [email protected]. The content will be deleted within 24 hours.
Aguerobeatsbest sports newsCityevertonfarewellManchesternews update sports