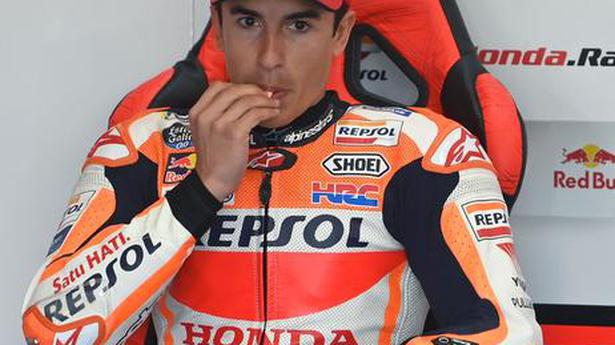 Marquez crashes heavily again at Jerez but races on

“After his check, marcmarquez93 has been declared FIT for the remainder of the SpanishGP,” his Honda team tweeted.

The 28-year-old Spaniard fell heavily in the third practice session at the circuit where last year he broke his right arm in the opening race to end his 2020 campaign.

Marquez made his comeback after nine months out and multiple bouts of surgery at the Portuguese MotoGP last month.

He admitted to a “lack of strength” after he struggled in Friday practice at Jerez.

In Saturday’s opening session he lost control of his bike at 180km at turn seven, sliding across gravel on his left arm and into a barrier.

Clearly shaken he managed to walk away, returning to the pits on a scooter.

After a medical check-up at the track Honda reported their star rider had “no major injuries suffering only a contusion”.

Shortly after in a second tweet the team added: “To double check his condition after the Turn 7 fall, @MarcMarquez93 is heading to hospital for further checks.

“These are precautionary and Marquez is not experiencing any pain or discomfort.”

Charte said he ordered a scan as “a check-up”.

“He has a big bruise on his neck and back, it doesn’t cost us anything to do a scan,” the doctor said. “It’s only a control scan, nothing more.” the doctor added.

Marquez finished seventh on an emotional return to the championship in Portugal on April 18 having elected to skip the opening two races of 2021 at Qatar.

At Jerez on Friday he could muster only 16th in the opening two practice sessions.

After the third session Takaaki Nakagami riding for Honda’s satellite LCR team topped the timesheets ahead of championship leader Fabio Quartararo of Yamaha.

Denial of responsibility! NewsUpdate is an automatic aggregator around the global media. All the content are available free on Internet. We have just arranged it in one platform for educational purpose only. In each content, the hyperlink to the primary source is specified. All trademarks belong to their rightful owners, all materials to their authors. If you are the owner of the content and do not want us to publish your materials on our website, please contact us by email – [email protected]. The content will be deleted within 24 hours.
auto racingbest sports newscrashesf1f1 latest newsf1 newsFITheavily