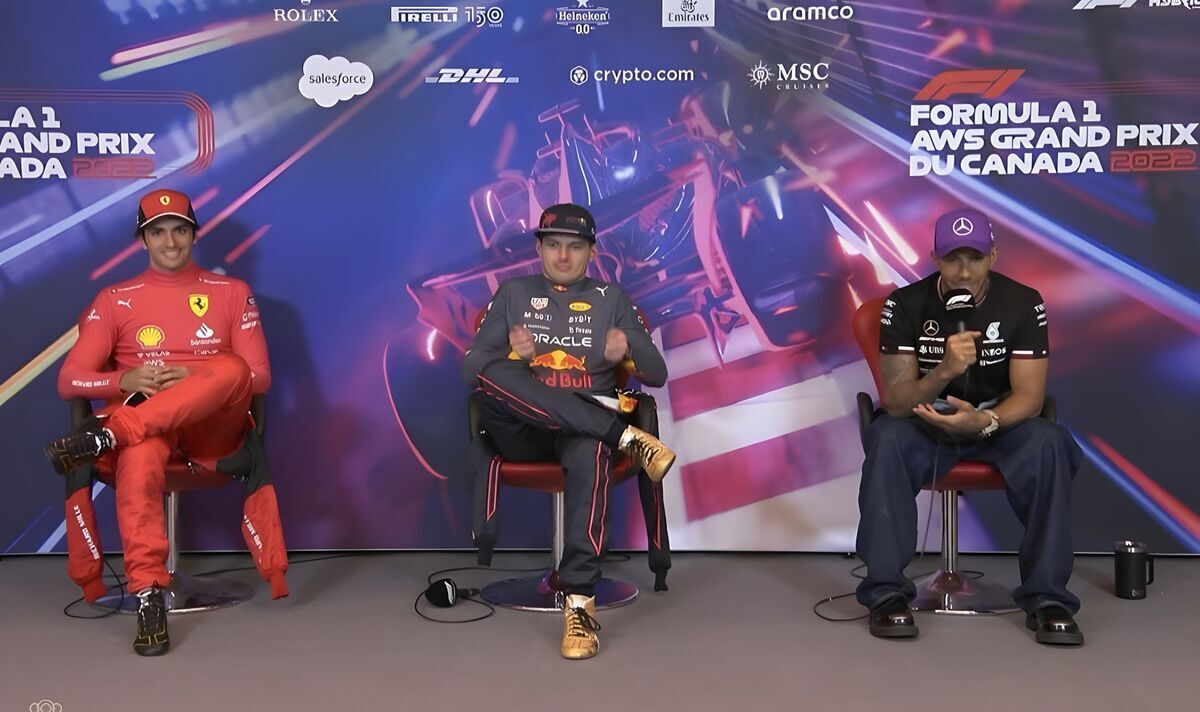 Max Verstappen appeared to poke fun at Lewis Hamilton during his post-race press conference after winning the Canadian Grand Prix on Sunday evening ahead of Carlos Sainz. The lead changed hands between the two drivers on a number of occasions but the Dutchman was able to keep his Spanish rival at arm’s length to stretch his points advantage at the top of the Drivers’ Championship standings.

Hamilton managed to cross the line in third place to secure a welcome podium finish in Montreal, but has often struggled with porpoising on long straights over the course of the season to date. Verstappen appeared to mock the 37-year-old as he explained the issue in his post-race press conference, with the Red Bull man bouncing up and down in his seat while pretending to hold a steering wheel.

The problem affected Hamilton at times throughout the weekend in Canada but did not stop him from joining in with the podium celebrations at the end of the 70-lap contest at the Circuit Gilles Villeneuve. He started from fourth place on the grid after qualifying well on Saturday and managed to gain a position during the race, with Fernando Alonso dropping down the order from second place to finish seventh.

It remains to be seen whether he will be able to deliver another strong result at the next time of asking at Silverstone, with the British Grand Prix set to return at the start of next month. Mercedes have suffered from problems with bouncing to a greater degree on higher-speed circuits, though, which suggests that it could be a difficult weekend for Hamilton as he looks to impress on home soil once again.

He will not be short on confidence, though, around a circuit he won at last season in spite of a high-speed tangle with Verstappen on the very first lap. Hamilton admitted after the chequered flag in Canada that his impressive third-placed finish has given him a renewed wave of self-belief as he prepares to return to Silverstone with his head held high.

“The women and men back at the factory are working so hard week in, week out and it’s so difficult for us all to be working and not always seeing progress,” he told Sky Sports F1.

“It’s been such a difficult year for me personally. Qualifying was emotional for me and back in the garage we were like: ‘Wow, this is beautiful for us’. Then to have a strong race just gives me so much hope and confidence going forward.

“There is potential in this car, but it’s got a really small working window and if you don’t get it perfect it’s all over the place and that’s a really hard thing to navigate through, but the team did a great job this weekend.”

Denial of responsibility! NewsUpdate is an automatic aggregator around the global media. All the content are available free on Internet. We have just arranged it in one platform for educational purpose only. In each content, the hyperlink to the primary source is specified. All trademarks belong to their rightful owners, all materials to their authors. If you are the owner of the content and do not want us to publish your materials on our website, please contact us by email – [email protected]. The content will be deleted within 24 hours.
Beatingbest sports newsCanadiancarGrandHamiltonsLewisMax