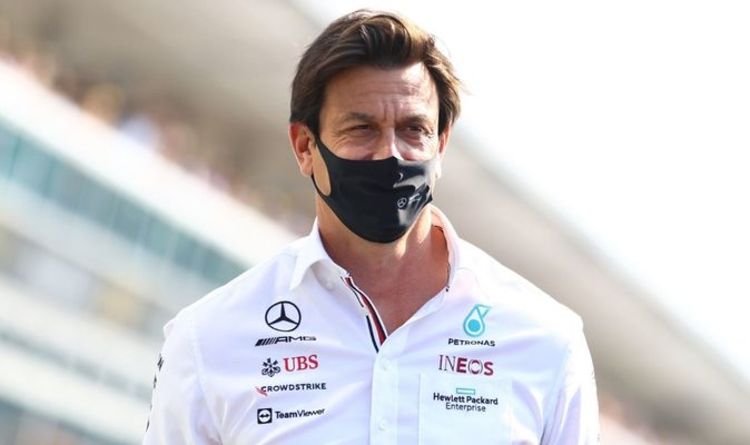 Mercedes boss Toto Wolff has fired a warning shot to Red Bull ahead of the Turkish Grand Prix, vowing to be “aggressive” in the title fight between Lewis Hamilton and Max Verstappen with just seven races remaining.

But, thanks to a win during a chaotic Russian Grand Prix, it’s currently Hamilton sat in the top spot, with the Brit holding a slim two-point advantage over Verstappen heading into round 16 at Istanbul.

Last season, the Turkish Grand Prix was quite the spectacle due to the slippery tarmac, cold temperature and rain, and it was where Hamilton equalled Michael Schumacher’s record seventh world title.

Like last year, rain is expected across the weekend, with Saturday proving to be the worst of the three days of track running.

Showers are expected in the morning on race day, however conditions are expected to be better than last year, with F1 admitting the circuit’s surface has been hugely improved.

If it does rain however, Mercedes could opt to take a new engine for Hamilton, relegating the seven-time world champion to the back of the grid in a hope to repeat Verstappen’s heroics in Russia.

Mercedes chief Toto Wolff admitted to having some ‘uncertainty’ about the track, but has urged Hamilton to be ‘aggressive’ despite also warning him this week that he cannot afford to fail to finish a race for the rest of the season.

“The final moments of the last race in Russia proved that anything can happen in F1 and fortunes can change in the blink of an eye,’ he said.

“This season is keeping all of us on our toes and that’s something we’re enjoying immensely, but it also means we have to be aggressive with our approach to the season, in order to maximise the points available.

“That’s our focus for Turkey and beyond. I know Lewis, Valtteri [Bottas] and the entire team are fired up for the battle that lies ahead, and we look set for another exciting race this weekend at Istanbul Park, where there are still many unknowns for us because of the track surface and weather conditions in 2020.

“It’s an exciting track layout and a good one for racing, so I think we’ll be in for another spectacular twist in this brilliant F1 season.”

Hamilton and Verstappen are currently embroiled in a fierce title race and have come to blows twice already this season.

They first tangled on the opening lap of the British Grand Prix, which saw Verstappen spear into the tyre wall at high impact.

They came together again at the Italian Grand Prix, with both drivers retiring from the race with no points scored on Sunday.

Wolff, who warned Hamilton he must now finish every race this season to keep his hopes of winning an eighth championship alive, also said that the team has been given a much-needed lift ahead of this weekend’s race after the Brit picked up his 100th Formula One career win at Sochi.

He added: “There’s been a brilliant buzz in the team over the last week or so.

“Being back on the top step of the podium was an incredible feeling for all of us, and particularly after such a dramatic race weekend.

“It was obviously made even more special by being Lewis’ 100th race win in Formula One.

“In the moment, milestones like this are exceptional, but I think it will take time for us to all realise just how remarkable this period of time is, and how privileged we all are to be part of this journey with him.”

Denial of responsibility! NewsUpdate is an automatic aggregator around the global media. All the content are available free on Internet. We have just arranged it in one platform for educational purpose only. In each content, the hyperlink to the primary source is specified. All trademarks belong to their rightful owners, all materials to their authors. If you are the owner of the content and do not want us to publish your materials on our website, please contact us by email – [email protected]. The content will be deleted within 24 hours.
battlebest sports newsGrandHamiltonLewisMaxMercedesnews update sports

We will go all out in T20I series against Australia, need to win it at any cost: Harmanpreet Kaur | Cricket News – Times of India