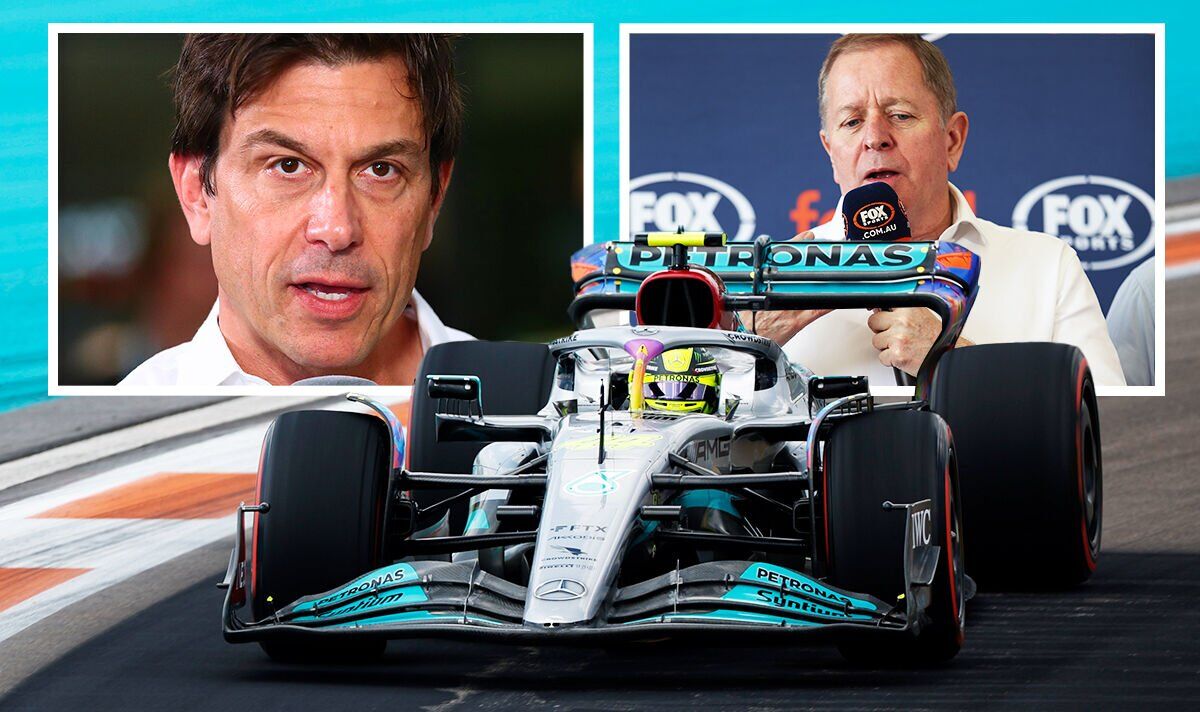 Mercedes have been told they will have to scrap their car if they don’t start to see results in the next two races. Martin Brundle believes they could need a complete redesign for the second half of the season following their disastrous start.

The Silver Arrows have fallen far short of their lofty standards this season, sitting just third in the Constructors’ Championship. The team have struggled under the new regulations introduced for this season which have seen a return of ground effect cars.

Lewis Hamilton has noticeably struggled more than George Russell, but Mercedes’ overall performance in the four races so far has been far off the pace of rivals Ferrari and Red Bull. And Brundle believes sooner or later Toto Wolff and co will have to take decisive action.

“There must be a point coming soon when they have to accept this car and concept doesn’t work and have a redesign for the second half of the season,” the experienced pundit told Sky Sports ahead of the inaugural Miami GP.

“It’s a really difficult situation Mercedes find themselves in. The next race or two, starting here, is critical for them solving the problem. Can they understand it? Can they fix it? If they get the potential out of the car, I think they will quickly be back in the game,” he added.

The team have won the Constructors’ Championship in the last eight years but now face the prospect of being usurped by Red Bull or Ferrari. Seven-time world champion Hamilton has suffered more than new team-mate Russell, sitting 21 points behind the young Brit and a further 58 points behind championship leader Charles Leclerc.

The team have brought a range of aero upgrades to Miami, including changes to both the front and rear wings as they look to turn their fortunes around. This has coincided with an improved performance with Russell topping the timing sheet after Free Practice Two and Hamilton finishing fourth fastest. However, both Mercedes drivers remain unconvinced by the performance of their car.

“It feels similar to me,” Hamilton told Sky Sports after the session. “We seem to be quicker here, and later on they were explaining to us that we definitely have improved in some way – and I’m not exactly sure why that is.”

“I don’t really understand it to be honest, why we’ve hit the ground running,” Russell added in his post-session Sky Interview. “We always knew coming into the weekend that the conditions should suit us better, because we’ve been struggling with tyre warm-up. For sure that’s played a big part, but the car’s working well.”

The pair will hope to give themselves a shot of a podium finish when qualifying gets underway later this evening after posting promising times in practice.

Denial of responsibility! NewsUpdate is an automatic aggregator around the global media. All the content are available free on Internet. We have just arranged it in one platform for educational purpose only. In each content, the hyperlink to the primary source is specified. All trademarks belong to their rightful owners, all materials to their authors. If you are the owner of the content and do not want us to publish your materials on our website, please contact us by email – [email protected]. The content will be deleted within 24 hours.
best sports newscarMercedesMiaminews update sportsnewsupdatePromisingrestarting

1 Takeaway For Every MLB Team 1 Month Into 2022 Season