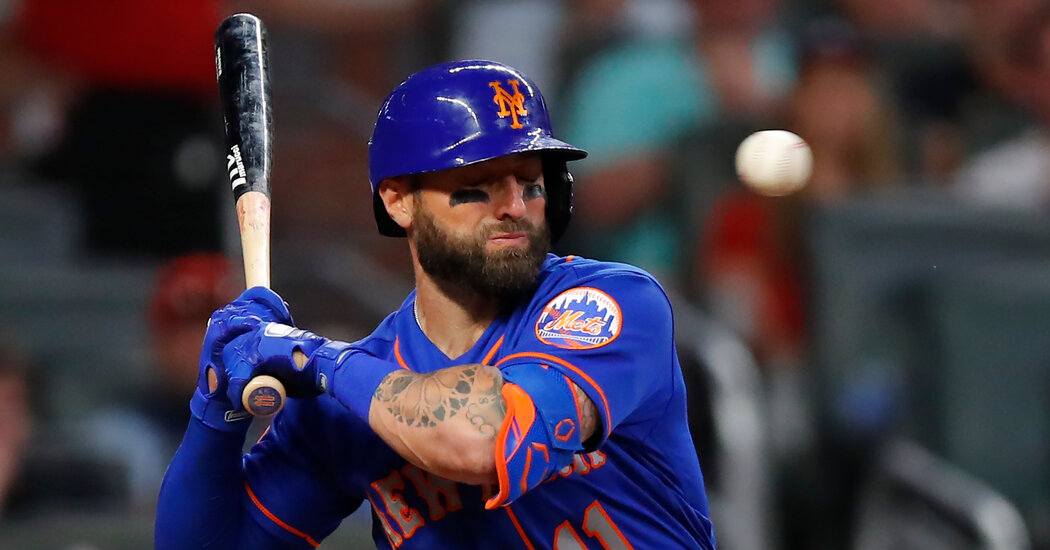 Mets’ Pillar Has Multiple Fractures After Fastball to Face

Kevin Pillar of the Mets was taken to the hospital on Monday night after he was hit in the face by a fastball during a game against the Atlanta Braves. Hours later, Pillar posted on Twitter that he was “doing fine” after what even he acknowledged was a scary incident.

Despite Pillar’s positive words, the Mets announced on Tuesday that the outfielder had sustained multiple nasal fractures. He will consult a facial specialist in Atlanta to determine a course of treatment. There was no word on how long he might be sidelined.

The incident, reminiscent of one earlier this season in which Bryce Harper of the Philadelphia Phillies also took a pitch to the face, happened in the seventh inning of Monday’s game in the Atlanta suburbs. Pillar was facing Jacob Webb with the bases loaded and was unable to react or move out of the way of a four-seam fastball clocked at 94.5 miles per hour.

(Warning: This video shows the pitch hitting Pillar and may be disturbing.)

Pillar went down immediately and rose from the ground with blood streaming from his nose.

Webb, visibly upset by the incident, put his hands on his head and then squatted on the mound as Pillar lay face down in the dirt next to home plate.

“Nobody in the ballpark thought he was trying to do that on purpose,” Braves catcher Jeff Mathis said. “He felt terrible.”

After being tended to by trainers, Pillar left the field on his own, his face covered by towels. A pinch-runner replaced him, and the Braves also removed Webb from the game. In the Atlanta dugout, Webb was consoled by at least two Braves coaches.

The game was paused briefly as members of the Atlanta grounds crew covered the blood that was visible near home plate.

The Mets said after the game that Pillar had been taken to the hospital for a CT scan. After the game, Pillar tweeted a post in which he said he was “doing fine.”

“Thanks to everyone that has reached out!” he wrote. “Scary moment but I’m doing fine!”

Since the bases were loaded at the time of the beaning, Pillar was credited with a painful run batted in. The Mets won the game, 3-1.

“That’s about as sickening a thing as you can see on the baseball field when a kid gets hit like that,” Braves Manager Brian Snitker said.

Hit by pitches have been at all time highs in the last few seasons, which combined with increased velocity from pitchers has created dangerous situations for batters. Pillar has been hit in the head twice before, MLB.com reported, in 2016 against the Red Sox, when he was hit on the helmet, and in 2019, against the Padres, when he was hit in the jaw by a 97 mile-per-hour pitch.

Denial of responsibility! NewsUpdate is an automatic aggregator around the global media. All the content are available free on Internet. We have just arranged it in one platform for educational purpose only. In each content, the hyperlink to the primary source is specified. All trademarks belong to their rightful owners, all materials to their authors. If you are the owner of the content and do not want us to publish your materials on our website, please contact us by email – [email protected]. The content will be deleted within 24 hours.
best sports newsfaceFastballFracturesMetsMultiplenews update sportsnewsupdate

Report: ‘Many’ NFL Insiders ‘Assume’ Deshaun Watson Will Be Placed on Paid Leave

Everything We Know About Fade, The New Apex Legends Mobile…