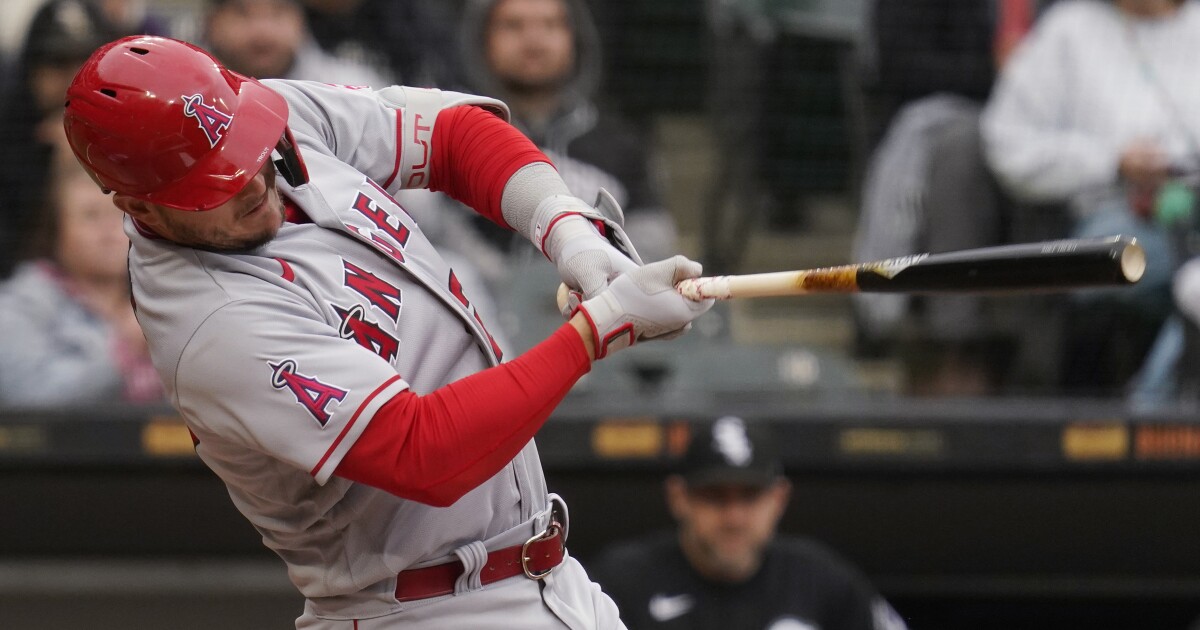 Mike Trout homered, doubled and scored three runs, Michael Lorenzen pitched into the ninth inning and the Angels held off the Chicago White Sox 6-5 Sunday for their seventh win in eight games.

Shohei Ohtani had an RBI as the Angels’ designated hitter. The two-way AL MVP went 0 for 3 and exited in the ninth inning because of tightness in his right groin.

Trout walked in three other plate appearances. Andrew Velazquez and Jo Adell each doubled in a run and Anthony Rendon each had an RBI as the Angels took a 6-0 lead.

Lorenzen (3-1) took a bid for his first career complete game into the ninth before the White Sox scored five times in a wild finish.

Ryan Tepera, the Angels’ third pitcher of the inning, retired Gavin Sheets on a bases-loaded grounder for the final out. Chicago has lost 11 of 13.

Lorenzen gave up singles to Jose Abreu and Sheets singled to begin the ninth, then was pulled with one out after Leury Garcia’s two-run double.

Reliever Raisel Iglesias allowed an RBI double by Josh Harrison and singles to Tim Anderson and Luis Robert as Chicago closed to 6-4. Iglesias walked Yasmani Grandal to load the bases with two outs and hit Abreu with a pitch to force in a run.

Tepera took over and earned his first save.

Still, Lorenzen was mostly sharp for a second straight start and third in four since signing a one-year contract with the Angels last November. The right-hander allowed three runs and nine hits, while walking two and striking two in 8 1/3 innings.

Lorenzen, who grew up in Anaheim and went to Cal State Fullerton, had never pitched more than seven innings in a game — doing it twice in his rookie year with Cincinnati in 2015.

Trout hit his sixth homer, a solo drive in the first.

Starting something: Lorenzen hasn’t been a regular starter since 2015 season with the Reds, who used him mostly out of the bullpen the past six years. Sunday’s start was the 30th of the 30-year-old’s career in 299 appearances.

Angels moves: Team recalled LHP Kenny Rosenberg from Triple-A Salt Lake and optioned LHP Jose Suarez. … Placed Matt Duffy (undisclosed condition) on the IL and recalled INF Jack Mayfield from the taxi squad. … RHP Noah Syndergaard (illness) threw a bullpen session after being scratched from his start on Friday. The Angels planned to announce a date for his return to the rotation after the game. Syndergaard is 2-0 with 2.12 ERA as he comes back from Tommy John surgery.

Denial of responsibility! NewsUpdate is an automatic aggregator around the global media. All the content are available free on Internet. We have just arranged it in one platform for educational purpose only. In each content, the hyperlink to the primary source is specified. All trademarks belong to their rightful owners, all materials to their authors. If you are the owner of the content and do not want us to publish your materials on our website, please contact us by email – [email protected]. The content will be deleted within 24 hours.
Angelsbest sports newsexitlateMikenews update sportsnewsupdateOhtanis